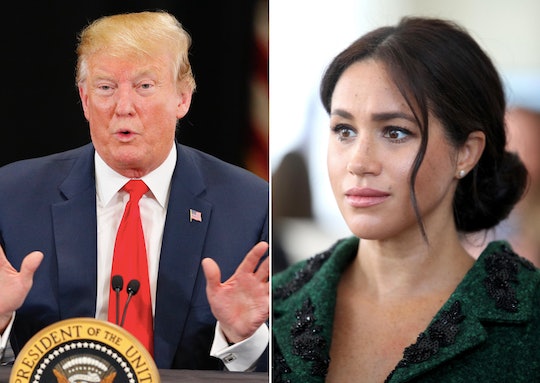 President Donald Trump announced Tuesday that he'll travel to the United Kingdom in June for a state visit, during which he'll meet with Queen Elizabeth and Prime Minister Theresa May, according to NPR. Considering the royal family is involved with state matters, there are understandably questions about whether Meghan Markle will meet Trump during his trip. Luckily for the Duchess of Sussex, who has openly criticized the president before, there's a good chance she'll miss the visit due to her maternity leave.

The royal family's Twitter account confirmed Trump's upcoming visit Tuesday, stating: "The President of The United States of America, President Donald J. Trump, accompanied by Mrs Melania Trump, has accepted an invitation from Her Majesty The Queen to pay a State Visit to the UK."

This trip is different than the working visit Trump had with the Queen in July 2018, when he noticeably walked in front of her as they inspected her honor guard. Talk about a big faux pas.

A state visit, unlike a working visit, is "an official visit to a foreign country by a serving head of state," that requires an invitation from the "host country’s head of state," according to Verdict. The host nation "offers its guests the highest level of hospitality" for state visits, so it's likely First Lady Melania Trump and the president will be treated very well during their two-day stay.

Of course, it's reasonable that some people might be curious about whether Markle will be involved in this state visit. The question is an especially interesting one because the Duchess of Sussex slammed Trump in the past, referring to him as “misogynistic” and “divisive” shortly before the 2016 presidential election, according to People.

But there's a good chance Markle will still be on maternity leave during this time, so the likelihood of her meeting Trump is slim to none. The Duchess of Sussex, who is set to give birth this month or in early May, might be absent from the public eye for months if Kate Middleton's past maternity leaves offer any clues.

It's probably a good thing that Markle will likely miss Trump this time around, especially since his visit is already off to a rocky start. Case in point: Trump's announcement about the state visit misidentified the Queen as "Her Royal Majesty" instead of “Her Majesty” or “Your Majesty," according to People. Oof. "This is going to be a disaster," someone tweeted in response to the gaffe.

"Oh groan," another person commented. "I feel sorry for the Queen and the rest of the RF who have to grin and bear it."

At this time, it's not clear whether Markle and her family members, including Prince Harry and the Cambridges, will meet with Trump. If they do, I have a feeling it will make for a very interesting visit.