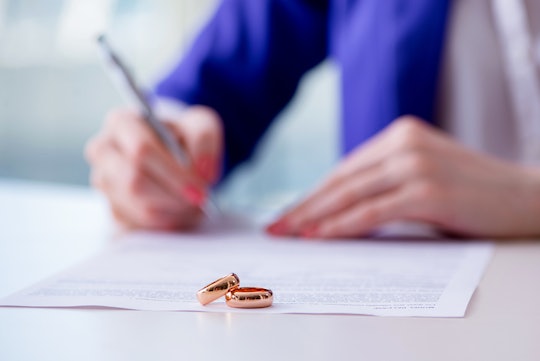 Imagine you are about to get married and your future husband presents you with a prenuptial agreement. Now, it's modern times and prenups aren't exactly uncommon or deal breakers for everyone. People are well aware that, sometimes, relationships end and should that happen, a prenup is there to protect each person's property and keep things fair. But not everyone sees it that way, as a troubling Reddit post demonstrated. In the recent post, a woman asked Reddit for advice on the prenup her fiancé presented her that demanded she lose all the baby weight she might gain during pregnancy.

The anonymous woman took to Reddit last week to share a rather confusing situation. It seems she is engaged to a successful neurosurgeon in Manhattan who wants her to sign a prenup. As she shared in the post, she was apparently game at first, happy enough to go along with a prenup if it would set her future husband's mind at ease. But then she had a look through the prenup with her lawyer, who I should also mention is apparently her future father-in-law, and she started to change her mind.

"My fiance put a few odd clauses in our prenup, such as an infidelity clause so if I cheat on him, I walk away with basically nothing," she shared on Reddit.

Sure, that sounds a bit unromantic, but that's not the most outrageous part of it all.

Apparently, the Reddit poster's future husband wants her to sign a contract promising to lose all of her baby weight within one year if she has children.

"Along with that, he put in a clause that stated that I have to lose any weight I gain after child birth, at least 30lbs of it in the first year following childbirth," she shared in her Reddit post.

After gaining many puzzled reactions and heated responses to her post, the woman went on to explain the nitty gritty of the weight gain clause to the baffled Reddit users:

... it's pre birth weight, peak pregnancy weight, post birth and then an annual weigh in to see if I have complied. "At least 30lbs" he told me that means if I gain 40lbs as unlikely as that may be, I'd have to lose at least 30lbs of it in the first year, then the rest the year following unless I get pregnant again and then it's gonna be added to the next child birth weight.

Reddit users were quick to offer advice when the anonymous poster said she hadn't yet signed the prenup and wasn't sure what to do, and many urged her to get her own lawyer to look out for her interests.

Beyond voices on Reddit, Randall M. Kessler of Kessler & Solomiany Family Law — also the author of the book Divorce Protect Yourself — tells Romper that it would "be very hard to find a lawyer that actually had one of these clauses enforced."

But, as outrageous as it sounds and unenforceable as it may be, why even include a clause like that to begin with? As Kessler explains, an upsetting clause like this is perhaps meant to "motivate people to certain behavior."

"In other words, if she’s afraid that she might violate the prenuptial agreement and forfeit the benefit, she will like to try harder to comply with it. Even if it is not enforceable by the court. Especially if maintaining certain weight is specifically difficult in a certain situation," Kessler tells Romper.

Kessler went on to explain, however, that it is "plausible that a lawyer could argue that the party was a grown adult and did not have to sign such an agreement." He added, "Because it is not an agreement to do something illegal such as buy or use an illegal drug, the court might very well determine that a grown person had a choice to not sign the document and to not get married, but because they did sign it, they are stuck with the consequences of their decisions."

Another lawyer, Leon Mindin of the Law Offices of Mindin & Mindin in New York, where the anonymous Reddit user lives, shared some interesting insight on the purpose of prenups. As Mindin explained to Romper, "Prenups are meant to resolve mainly financial issues to allow parties to quickly settle issues for divorce."

But most noteworthy, as Mindin tells Romper, is that simply, a clause like that "is unenforceable" because "prenuptial agreements are not enforceable during the course of the marriage."

Mindin added, "A prenup cannot direct someone to act a certain way or that they are required to do something during the marriage. No attorney would put that type of language into an agreement."

With all this said, it seems the advice she received on Reddit worked, as the woman told commenters, as Yahoo! Lifestyle reported, that she plans to hire her own lawyer and will ask that the weight loss and infidelity clauses "go both ways."

More Like This
When Does Pregnancy Horniness Kick In?
This Is What Experts Say About Eating Hot Dogs During Pregnancy
Can You Bowl While Pregnant? Experts Weigh In
OB-GYNs On How The End Of Roe Changes How They Can Care For Us