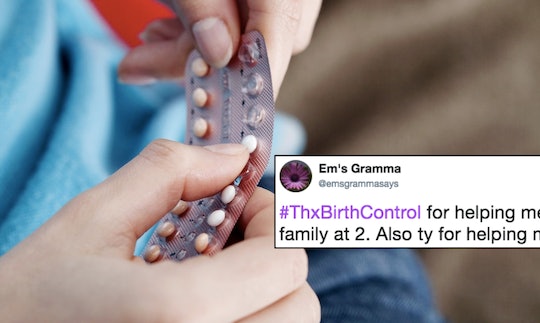 Thanks to a pretty brilliant campaign, women are using #ThxBirthControl to show how access to contraception has changed their lives. Birth control tends to carry a controversial connotation within the United States, and even in 2017, still too many people don't seem to realize it can be used for more than one reason. And it's because of that misconception that the National Campaign to Prevent Teen and Unplanned Pregnancy launched the Thanks, Birth Control Day back in 2012. Since then, the day has taken place on or around Nov. 15 annually, and has been a time for women all over the nation to express their gratitude for being able to take birth control on their own terms.

As the National Campaign to Prevent Teen and Unplanned Pregnancy's website states: "The power to decide if, when, and under what circumstances to get pregnant is a BFD." And as true as that statement is, the fact of the matter is that birth control is used for a myriad of reasons to help women maintain their own health, lifestyles, and choices. And the tweets from women explaining why they're thankful for birth control are so important to look at, because they represent the many, many reasons and ways birth control has helped them. Here's what women had to say on Thanks, Birth Control Day.

It Helps With Health Conditions

As most women know, doctors can prescribe some form of birth control for health issues beyond unwanted pregnancy. From controlling acne, to menstrual cramps, and even possibly preventing ovarian cysts, birth control pills come with many benefits that help women live healthier and happier lives.

What's more, according to the American Cancer Society, birth control has been known to reduce the risk of endometrial cancer, ovarian cancer, and colon cancer. Overall, birth control can help women control a variety of health concerns that aren't sex-related. Of course, a woman not wanting to get pregnant isn't a bad thing, and many are grateful for birth control for that reason alone.

It's OK To Not Want A Baby

In its most basic sense, birth control is a way for a woman to have sex without the constant anxiety of getting pregnant. According to Planned Parenthood, the birth control pill is highly effective at preventing an unwanted pregnancy:

The birth control pill works by stopping sperm from meeting an egg (which is called fertilization). The hormones in the pill stop ovulation. No ovulation means there’s no egg hanging around for sperm to fertilize, so pregnancy can’t happen.

And really, there's absolutely nothing wrong with wanting to prevent a pregnancy. Women are more than just baby-making machines and don't have to have children if they don't want to or simply aren't ready to.

What's more, as many online have pointed out, birth control is also beneficial for women who've already had kids and are done growing their families. It puts them in control of their own bodies, as they should be.

Women Want To Work, Too Ya Know

Another reason women are extremely thankful for birth control is that it has given them the power and ability to keep working and making their mark in the world. In fact, a study from the University of Michigan's Institute for Social Research uncovered that birth control has had a huge impact on women's presence in the workforce. According to the study:

Roughly one-third of women’s wage gains through the 1990s are due to the availability of oral contraceptives.

Because, really, birth control has been life-changing and life-saving for so many women that it should be accessible for anyone who needs it. So, yes, #ThxBirthControl, for allowing women to live the lives they want.