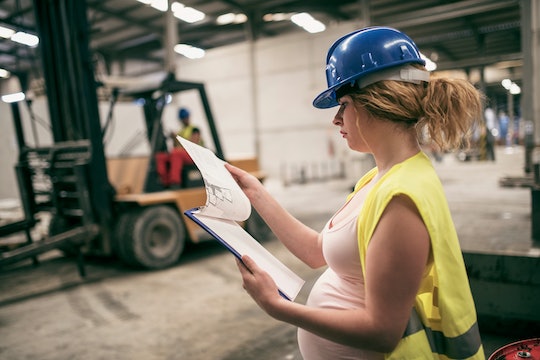 In 2015, women rejoiced after what was seemingly a game-changing Supreme Court decision. The court's decision for Young vs. UPS would set a new legal standard for evaluating pregnancy accommodation cases under the Pregnancy Discrimination Act (PDA) and would make it difficult for employers to deny expectant mothers accommodation, such as extra bathroom breaks or a reprieve from lifting heavy weight, to continue their work. However, four years later, a new report has found that workplace discrimination against pregnant women is still a real problem.

According to a report released last week by A Better Balance —  a legal advocacy organization that promotes fairness for pregnant women and mothers in the workplace — many pregnant workers are still being forced to choose between a paycheck and a healthy pregnancy. Particularly caught in the crosshairs are low-wage pregnant workers with physically demanding jobs, who jeopardize their health by working when denied medically necessary reasonable accommodation by employers.

According to numbers by the Pew Research Center, 40 percent of mothers today are the sole or primary breadwinners of the family. Not only that, but in the past five decades, the number of breadwinner mothers has increased and the share of families led by a single working mother has more than tripled, according to Pew's research. For pregnant women or mothers who are the sole or primary breadwinners of households, choosing between paycheck and a healthy baby puts them in a particularly difficult position.

“We know when women are pushed out, it often spirals into a deep circle of poverty that they have a tough time climbing out of,” Dina Bakst, co-founder of A Better Balance and co-author of the report, told HuffPost.

Still, for those cases that do go to court, the report found that over two-thirds of courts held that employers were not obligated to accommodate pregnant workers under the law. In response, many states have adopted their own legislation to require employers to provide some for of accommodation to pregnant workers. As of this month, according to the advocacy group, 25 states and five cities have passed some form of legislation that would require accommodations.

The legal organization is pushing for a bipartisan effort to pass a federal law, the Pregnant Workers Fairness Act first introduced in Congress in 2012 by Rep. Jerrold Nadler (D-NY), that would require employers to provide reasonable accommodations to employees for pregnancy, childbirth, and related medical conditions

“In order for pregnant workers to achieve true equality and equal opportunity in the workplace, the law must grant pregnant workers a clear right to reasonable accommodations,” the report reads. The Pregnant Workers Fairness Act would be modeled after existing language and framework used in the Americans with Disabilities Act (ADA), which was passed in 1990.

When it comes to caring for its mothers, the United States has a long way to go. According to a study published earlier this year by the National Bureau of Economic Research, women in the United States face a severe “child penalty” or “motherhood penalty.” The study showed that women and men evolve very similarly in their compensation up until the point of the birth of their first child, after which the gender pay gap significantly widens. The working paper showed that inequality in pay caused by child penalties has doubled in the recent years, from 40 percent in 1980 to 80 percent in 2013.

In addition, Pew numbers show that mothers experience more career interruptions than fathers. And because mothers aren’t guaranteed paid leave to recover from childbirth and bond with a new baby, nearly one in four women return to work after just two weeks of giving birth, according to Abt Associates’ analysis of data from the Department of Labor. The United States remains one of the only countries in the world to not offer paid maternity leave to new mothers, according to the UCLA World Policy Analysis Centre.

With these numbers clearly showing a trend exclusively sidelining U.S. mothers, it is yet to be seen whether or not the federal government will take action to address the disparity.