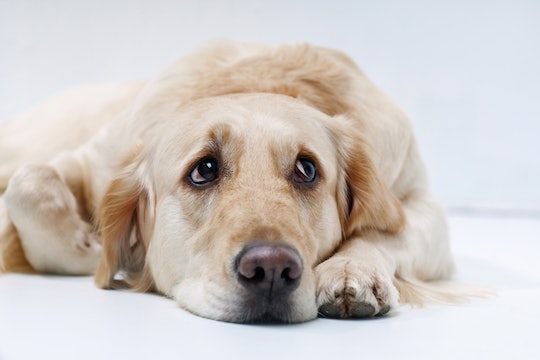 If Your Dog Seems A Bit Moody, New Research Says This Could Be Why

Have you ever noticed on your down days, your dog seems a bit blue, too? Or how about that quintessentially canine characteristic of being ready to celebrate at the drop of a hat, no matter the cause? Well, your dog could be experiencing mood swings, according to new research, and it has to do with how you're feeling as well. Michigan State University researchers found that not only do dogs have full, unique personalities; but they also go through mood changes based on the attitudes and behaviors of their owners.

It's the age old nature vs. nurture debate — but with a slightly hairy twist. Researchers from Michigan State recently published a report in the Journal of Research in Personality that explained how dogs' personalities are shaped by how their owners treat them, as People reported. Essentially, dogs go through your emotions and life changes with you, and come out different at the end.

The team of researchers, led by William Chopik, professor of psychology, surveyed over 1,600 dogs made up of over 50 different breeds and ranging in age from several weeks to 15 years, as the Daily Mail reported. Researchers interviewed the owners about their own, as well as their pups', personalities. Chopik said that his team "found correlations in three main areas: age and personality, human-to-dog personality similarities and in the influence a dog’s personality has on the quality of its relationship with its owner," according to Science Daily.

Overall, the owners surveys suggested that dogs' personalities tend to mimic those of their owners, as reported by Salon. More extroverted people have dogs with higher energy, while pessimistic owners have anxious dogs. Owners who are more loving and positive have dogs who show fewer signs of aggression, which suggests that owners influence how their dogs' personalities develop and change over time.

Along with their owners, Coptik said that obedience training impacts canine personality. "Exposure to obedience classes was associated with more positive personality traits across the dog’s lifespan," he told Science Daily. And owners can also influence their dogs' reactions to training, the study suggested. Owners who told the researchers they shared a close, positive relationship with their pets tended to have dogs who responded well to obedience classes. That is, they were more agreeable and had a higher success rate in school.

"The findings mirrored human personalities in weird ways," Chopik told Salon. "We found dogs were more responsive to training midway through their life, which is interesting because conscientiousness peaks around midlife in humans."

Perhaps the most important takeaway of this study is the profound impact that owners can have on their dogs. Beyond just being pets, dogs often serve as life partners for their humans. They see and respond to the highs and the lows in your lives, and your behavior shapes theirs.

“When humans go through big changes in life, their personality traits can change," Coptik told the Daily Mail. "We found that this also happens with dogs — and to a surprisingly large degree."

Being thoughtful about the interactions that you have with your dog, and remembering that they, too, have emotional responses to stimuli is crucial to raising a healthy, well adjusted pup. Dogs are often called "man's best friend," but it's important to remember that man is dog's best friend as well. That relationship really does go both ways; your dog's life begins and ends with yours. And if you're treating your best friend poorly, don't be surprised if he turns out to be kind of a jerk.

More Like This
Everything Families Need To Know About The Westminster Dog Show
Princess Charlotte Is Ready To Be A Soccer Star, Too
Here’s How To Fight For Abortion Rights
20 Of The Best Movies To Watch This 4th Of July