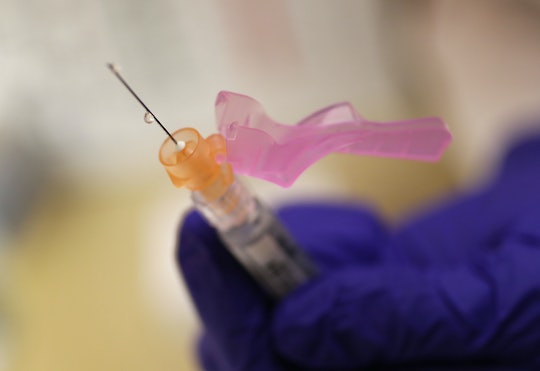 Thanks to vaccines, preventable illnesses (such as measles) had all but been eradicated in the U.S. at one point. Unfortunately, though, a growing number of parents have chosen to opt out of routine vaccinations for their children — leaving them and at-risk groups vulnerable to these highly-contagious diseases. Decades after the anti-vax movement took off, public health is now paying the price. As states and health professionals fight back with laws and the spreading of actual facts, another major influencer has made a bold move... and YouTube's stance against anti-vax channels is a huge step in stopping the spread in misinformation.

It all started when BuzzFeed News reported the disturbing reality of what turns up when users are watching content about vaccine safety on YouTube. Although YouTube searches for "are vaccines safe" typically gives top search results from an authorized medical source, the "Up Next" algorithm often follows up with suggestions for anti-vax videos. Which obviously is a huge problem in this age where rampant misinformation online can have serious, real-life consequences.

What's worse is at least seven advertisers weren't even aware their ads had been showing up during anti-vax videos. Since BuzzFeed's report, however, all have contacted YouTube and have pulled programmatic placements. “We have strict policies that govern what videos we allow ads to appear on, and videos that promote anti-vaccination content are a violation of those policies," a YouTube spokesperson said in a statement to Variety. "We enforce these policies vigorously, and if we find a video that violates them, we immediately take action and remove ads."

YouTube's stance comes at time during which measles outbreaks are becoming increasingly common in the U.S. There have been at least 65 confirmed cases of measles in Washington, for example, according to the Washington State Department of Health. And over in New York, a measles outbreak affecting more than 200 people still isn't contained, according to CNN.

Things have gotten so bad that Dr. Scott Gottlieb, commissioner of the Food & Drug Administration (FDA) has hinted the federal government could step in if states don't. Because nearly all states allow children to attend school even if their parents have opted out of getting them vaccinated. "Some states are engaging in such wide exemptions that they're creating the opportunity for outbreaks on a scale that is going to have national implications," Gottlieb said in an interview with CCN on Tuesday. He added that if "certain states continue down the path that they're on, I think they're going to force the hand of the federal health agencies."

Clearly, the anti-vax movement is a problem that's not going away anytime soon. Which is mind-boggling to me and so many others, considering all of the peer-reviewed, scientific studies out there proving just how safe and effective vaccines are... not to mention the fact that the doctor who published a study linking the MMR vaccine to autism, Andrew Wakefield, was been stripped of his medical license, as TIME reported. Plus, the results his "study" have been repeatedly and emphatically disproven, according to Vox.

Although we still have a long way to go in convincing some parents that vaccines are safe, to me, YouTube's stance against anti-vax channels is another step in the right direction.

More Like This
The Covid Vaccine For Kids Under 5 Has Been Sent To The FDA For Review
Tick's Head Gets Stuck Under Your Skin When You Were Pulling It Out?
Way Too Many Parents Have Zero Plans to Talk About Sex With Their Kids
How To Properly Clean An Inflatable Pool