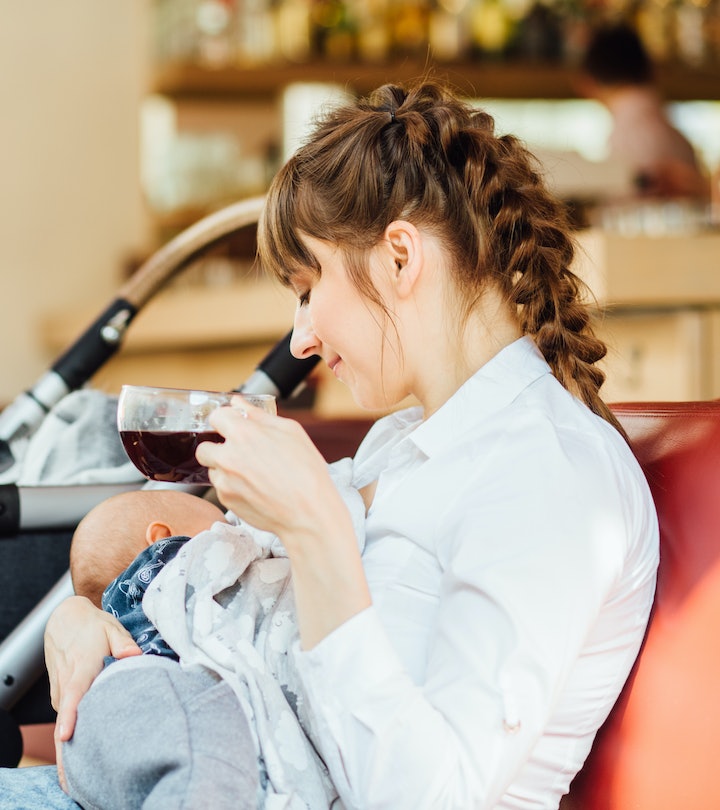 Is It Safe To Take Ashwagandha While Breastfeeding? Experts Explain

We asked experts about this ancient herb.

When it comes to which food and drinks are safe to enjoy, breastfeeding isn’t quite as limiting as the pregnancy that came before it. Breastfeeding moms can safely enjoy some things pregnant people tend to avoid, like turkey sandwiches from the deli, fresh sushi, and even a glass of wine. But when it comes to the safety of supplements while breastfeeding, things can definitely feel a little more confusing, and just because an herbal supplement is available over the counter doesn’t necessarily mean it’s safe to use while breastfeeding. The postpartum period can be stressful and even anxiety ridden, and — particularly if this Ayurvedic herb has helped you destress before — you might be wondering if it’s safe to take ashwagandha while breastfeeding. The guidance on things like vitamins and supplements while breastfeeding aren’t always incredibly clear, which can be frustrating. Without a call to your OB-GYN, you might be feeling left in the dark. While a call to your doctor to be sure is always your best bet, we also spoke to some experts about the general safety of ashwagandha while breastfeeding.

Especially if you’re invested in wellness culture on social media platforms like Instagram, you’ve likely heard of ashwagandha. This trendy Ayuverdic herb is believed to have a host of benefits, but actually, experts don’t know a lot about it.

Ashwagandha is a shrub that is native to India, the Mediterranean, and the Middle East. It produces yellow flowers and scarlet-colored berries. “The root, leaves, and berries of this plant can be used medicinally as an adaptogen,” says Kendra Clifford, naturopathic doctor and practicing birth doula. “Adaptogens are defined as herbal medicines that help your body handle stress.”

Is ashwagandha safe when breastfeeding?

Due in large part to a lack of research and hard data, it is difficult for health care professionals to say definitively whether or not ashwagandha is safe when breastfeeding. “Like many other herbs, ashwagandha is currently listed as ‘unsafe due to lack of evidence’ with regards to breastfeeding,” Clifford explains. “However, this is at least in part due to the ethical-moral implications of performing research studies on pregnant or lactating women.”

Without any valid trials that clearly show the usefulness or safety of ashwaganda for a breastfeeding person, it’s nearly impossible to measure how much of the active ingredients in this herb cross into breast milk, explains Kairis Chiaji, a doula working with Blue Shield. “The risk would come with the inability to control or predict the side effects in adults or the newborn. And while not common, they can be severe. There are medical conditions that make it absolutely contraindicated, like diabetes. There are other ingredients in supplements that can vary by the brand or source that parents should also take into consideration,” she says. It’s worth noting that ashwagandha supplements are not regulated by the Federal Drug Administration (FDA).

With all of these qualifiers in mind, Clifford notes that Ashwagandha is extremely popular and commonly used in Ayurvedic medicine. “It has been used in pregnant and lactating women for centuries,” she says.”

Ashwagandha has been used for thousands of years in Ayurvedic medicine. A 2020 review of 69 studies found that ashwagandha may be a safe and effective traditional medicine for the management of schizophrenia, chronic stress, insomnia, anxiety, memory/cognitive enhancement, obsessive-compulsive disorder, rheumatoid arthritis, type-2 diabetes, and male infertility. The same review notes that “properly designed, randomized-controlled, large-size, prospective trails with standardized preparations are needed” in order to really know more about ashwagandha safety and benefits.

Other benefits of ashwagandha may include:

Since it’s hard to say whether or not ashwagandha is safe while breastfeeding, both Clifford and Chiaji declined to give advice on how much ashwagandha is safe to take. They both recommended speaking with your OB-GYN or another doctor before taking the herb and getting guidance from them.

More Like This
Cradle Cap Is Normal & So Is Your Desire To Get Rid Of It. Here’s How
Chrissy Teigen Nodding Off While Breastfeeding As Miles Chats Away Is Too Relatable
A Parent’s Guide To Stomach Pain In Kids
When Does A Baby Recognize Their Father? A Pediatrician Explains
What Parents Are Talking About — Delivered Straight To Your Inbox