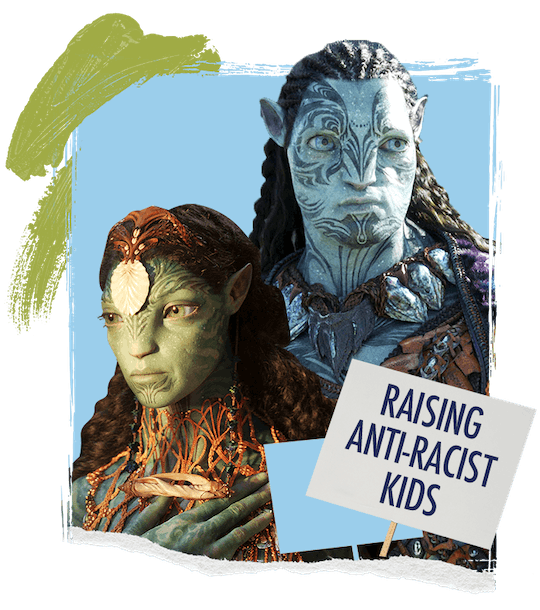 How To Talk To Your Kids About Avatar: The Way Of Water

Indigenous voices are calling for a boycott of this film.

Avatar: The Way Of Water arrived in theaters on Dec. 16 and some kids are excited to use their holiday break to catch the movie at their favorite theater. Before you buy them tickets, though, here’s something you should know. Many Indigenous leaders and activists are actually asking you to refrain from seeing the movie — for good reasons.

The Avatar franchise fails horribly when it comes to adequately representing the Indigenous people the writer/director claims to glean inspiration from. Told through the lens of a white filmmaker, James Cameron, The Way Of Water falls short in so many ways, from casting white actors as Na’vi, the fictional Indigenous people of Pandora, to not being led by Indigenous creators, crafting a storyline that deepens colonialist ideology, and not presenting full, accurate, multi-dimensional stories of Indigenous people.

This week, Yuè Begay, a Nádleehí and Navajo Two Spirit trans woman, called for a boycott of the film, stating, “We are the experts in portraying our hurt, suffering, and more importantly, our resilience.” Kelly Lynne D’Angelo, a Native TV and musical writer, tweeted that Cameron should donate his profits to Native causes, adding, “you took our land, then our children, then our skin. can’t you see this is *still* manifest destiny in action?”

But look, it’s the holidays, us parents have a lot on our plates, and you’re probably wondering what to actually say to your kids when they beg to see the movie. They’re understandably drawn in by the vivid imagery of this sci-fi adventure, not to mention the commercial hype from the original one. I spoke to Karissa Valencia, the creator of Netflix’s Spirit Rangers — an Indigenous kids show that gets it right — to get the scoop on what exactly to tell your kids about Avatar, how to guide them in asking their own questions, and even what to watch instead.

“I’ll be honest, I couldn’t finish Avatar when it first came out in 2009,” Valencia tells me. “I remember feeling like I must’ve missed something because everyone really loved it. I tried again, and the stunning technology still couldn’t hide the fact that the storytelling felt extremely outdated and recycled: an outsider ‘goes native’ and learns the importance of our teachings. He’s the hero, it’s his story, and the aliens are there to move his story forward.”

We have so little representation in TV and film, it’s heartbreaking that when our cultures are finally on screen, we’re aliens from outer space.

This lazy cliché simply illustrates the fact that Avatar is told through the lens of a white filmmaker with an inaccurate view of Indigenous history. Cameron has been rightfully criticized for comments he made to The Guardian in 2010 that describe the Lakota Sioux as people who “were hopeless.”

This is a false and dangerous narrative of Indigenous people that bleeds into how they are depicted in the films. “What was the most upsetting was how [Avatar] represented Indigenous people,” Valencia says. “We have so little representation in TV and film, it’s heartbreaking that when our cultures are finally on screen, we’re aliens from outer space. Native people don’t even exist on ‘Earth’ in this film. There were no soldiers or scientist characters who are Indigenous even though we are both in the modern day. If there was a Native character, they were primitive and from another planet. This is a tired trope that erases us from existing in the 21st century.”

Of course, Indigenous people do exist in present-day society in myriad ways. This erasure does real harm, feeding viewers a falsified narrative about Indigenous people while attempting to normalize this version to adults and kids alike.

There is a better way to make content that features Indigenous characters. As an Indigenous creator, Valencia stays aligned with the values she grew up with to craft a show that is equal parts lessons for kids and compelling entertainment for their young minds — and she does it with an all-Native writers room. “When making Spirit Rangers, we Indigenized our production,” she says. “Elders were invited into the creative process; we asked for blessings from tribes, and had about 100 Indigenous cast and crew members working alongside our talent at Netflix and Super Prod Animation.”

If, like me, you are deciding to listen to the voices that are asking us to boycott Avatar: The Way Of Water, you’re probably looking for some ways to address it in a kid-appropriate way. I talked with Valencia about how to get that chat going with your children. Here are some conversation starters:

If your kid is still begging for an action movie, Black Panther is an outstanding choice. “We don’t endure the tired trope of learning about colonization from a white POV,” Valencia says. “We get to see multiple perspectives from Indigenous characters (Shuri vs. Namor or T’Challa vs. Killmonger). There are multiple perspectives because we are not a monolith as a community.”

For more sci-fi, check out Prey from Hulu and be sure to peek this list from Autumn Asher BlackDeer, Ph.D., a University of Denver social work professor who is of the Southern Cheyenne Nation, of sci-fi movies by Indigenous people telling their own stories.