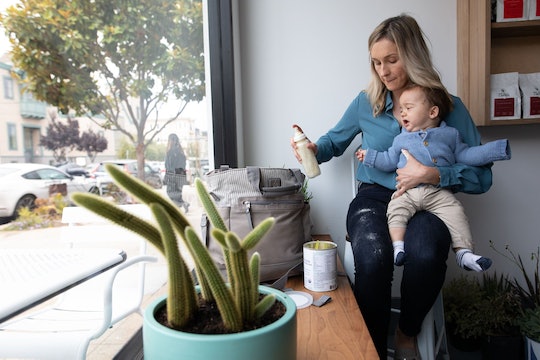 You’re Not Alone. Research Shows 72% Of Parents Have Trouble Feeding Their Babies.

It’s not as simple as ‘insert nipple here.’

What is it about feeding a baby that can make you feel so high, and in the same day, so low? When they get their latch right or finish a full bottle, cuddled close to your chest, you feel a deep sense of connection, pride, and contentment. But when the latch is painful, supply is low, or the formula won’t stay down, the guilt and anxiety set in. What am I doing wrong? What should I be doing instead?

A new research project from Bobbie, a female- and mother-led formula company based in the U.S., sheds some light on the ubiquity of feeding challenges and their impact on maternal mental health. In their survey of 1,000 new moms, 72% of respondents said that feeding their baby was much more challenging than they had anticipated, and 79% admitted they have felt guilty about some aspect of their infant feeding journey.

Bobbie also followed 11 new parents through their postpartum feeding journey via video diaries, highlighting the specific obstacles that derail the best laid plans: managing oversupply, pumping while working, breastfeeding a preemie, and more. In one Feeding Confessional, first-time mom Alexis said she expected to breastfeed but ended up exclusively bottle feeding with breast milk; she switched to formula at seven months when her baby didn’t like the taste of the frozen milk supply she had stored up.

Bobbie’s research also suggests that the stigma around using formula is real, too. In Bobbie’s survey, 46% of moms said they had lied about using formula to avoid being judged.

In another Feeding Confessional, second-time mom Jen shares that after her daughter was born, she was unable to breastfeed, which led to what she calls a deep depression because of feeling guilty. When her son was born, his tongue tie made it painful for him to latch. After a breakdown at the pediatrician’s office, Jen finally got permission to feel OK about formula feeding.

“She gave me a hug and said, ‘I fully support whatever you want to do.’ And I said, ‘I want to exclusively formula feed.’ She said, ‘Do it, and don’t look back.’”

And Laura Modi, who is one of Bobbie’s founders, shares in her video diary that it took three feeding journeys to release the formula stigma and let herself enjoy feeding her baby.

“It’s taken me years to get to the place where I feel like I’m not going to feel bad about having to turn to something else. I would love that every new mom felt that way. I’m looking at my thriving, beautiful baby boy and just have the peace of mind that he’s getting all of the love and attention I can give to him now not having to worry about every ounce he’s consuming.”

More Like This
Is It Safe to Take Ibuprofen While Breastfeeding?
Why Does My Baby Call Everyone Mama?
6 Ways To Fix A Shallow Latch So Your Baby Can Nurse Properly
Here’s How A NICU Stay Can Affect Breastfeeding