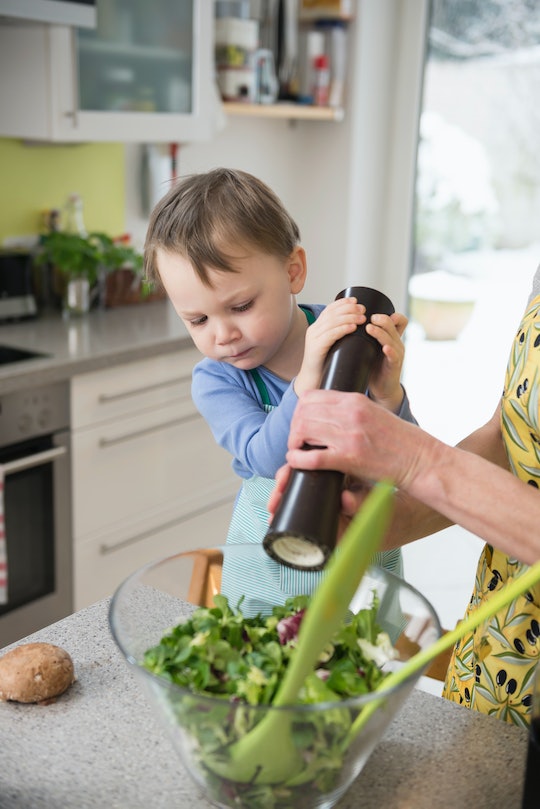 This is how you can introduce spices to your child’s food, and up the chances they’ll actually like it.

Introducing new foods, especially spicy foods, to your baby can be a hit-or-miss proposition: They like some, they swat some away with a sticky hand. At around 6 months of age, as per the CDC, children can start experimenting with an assortment of solids from different food groups. But anything from a food’s texture to the frequency of exposure might impact a child’s preference. So while a bit of trial-and-error is to be expected, who’s to say when you can toss some Sriracha into your sweet potato-puree? To some, the question of spice is a matter of taste, though introducing such flavors might be beneficial. “Incorporating spicy foods safely into a child’s diet can help diversify the foods they’ll accept short-term, and broaden their palates long-term,” says pediatrician Whitney Casares, author of The Working Mom Blueprint: Winning at Parenting Without Losing Yourself.

When Can I Give My Baby A Taste Of Spice?

While you might have already conjured up a mental picture of a Scotch Bonnet pepper, it’s important to remember that the word “spice” can describe a number of different flavors, not all of which are hot, tingly, or searing to the tongue; think flavors like cinnamon, clove, and saffron. When your baby has started exploring solid foods, you can think about the new flavors to introduce with them, says Casares, who recommends starting with a small amount of a mild spice, evenly distributed in the food. So you can imagine blending swirls of cinnamon into your baby’s warm cereal, for example, or onto soft roasted vegetables; such a technique won’t overwhelm a child’s digestive system, Casares says. Another benefit to adding ground spices first? “They won’t see it in their food — and toddlers can be very picky about the way their food looks,” says Dr. Tracey Agnese, M.D., an NYC pediatrician and supportive resource for baby and mama care. “A large piece of green parsley can be very off-putting to a toddler!”

While doing this, take care to avoid a trio of ingredients. “No honey, or any added salt or sugar until the baby is at least 1-year-old,” Agnese says. “That’s because, [when] under [1-year-old], their kidneys cannot handle extra salt, and they are at risk of botulism toxicity from honey spores.”

How Can I Continue To Introduce Spicy Foods & Flavors To My Baby?

After an easy and subtle introduction, you can adjust the spice level “slowly over the course of a few weeks by increasing the amount you incorporate every two [to] three days,” Casares says. Incorporate new spices in the same way. Some will get a smile, some… won’t. Just be sure to skip large pieces of spicy foods, says Casares; this will work in your favor to not unintentionally create an aversion. “Make sure to not offer large chunks of spicy ingredients, like raw jalapeño, or sauces to your child to avoid discomfort or skin irritation.”

If your kiddo sent a bowl of scramble sprinkled with Tabasco flying to the floor, don’t freak out. Instead, consider switching up the spices and keep trying. “Most toddlers who like spicy foods start their spice journey early,” Casares says. “Model enjoying spice yourself. Offering your child a taste of your slightly spicy cheese, or peppered soup, normalizes spice as part of a healthy diet.” You can also get them involved in the cooking, Agnese says. “They’re much more likely to try [a food] if it’s something they took part in making. While cooking, let them smell the spices and talk about it — what do they see, what colors and sizes, what does it smell like, and what does it do to their nose?”

And while some parents find themselves negotiating daily with a picky eater, other toddlers naturally go through picky phases, says Casares. “Pediatricians expect that children who were originally adventurous eaters might have food jags in the toddler years.” Don’t force the foods during such phases, but do “continue to offer them at regular intervals so they don’t become completely unacceptable.” Avoiding such frustrating scenarios can only help but make food and the process of eating and feeding more enjoyable for parents and kids. And don’t give up: “Often kids need to be exposed to something tons of times before they ‘like’ it,” Agnese says.