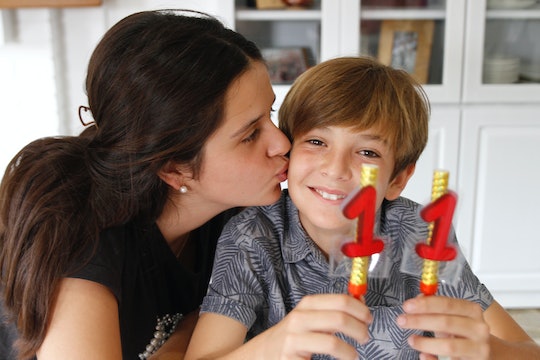 I have not been expected to throw excellent birthday parties for my kids since I left my husband. I cannot overstate what a blessing this has been for me.

I have not been expected to throw excellent birthday parties for my kids since I left my husband. I cannot overstate what a blessing this has been for me. Being a single mom was like having a doctor’s note to get out of school, a “get out of jail free” card where really anything I did at all for my kids for their birthdays was fine, just fine. What an unexpected bonus this has been for me. If I had known that being a single mom meant I could basically turn in a C+ birthday party for my kids, I would have left much sooner maybe.

This is not to say I don’t appreciate throwing a good birthday party. Or that I haven’t felt pressure coming from inside the house. I tried for my boys; I wanted for my boys. Sometimes, I would lay in bed in the weeks before an impending birthday and think about what I could be doing, should be doing, instead of what I knew I would be doing. I would play this little game in my head called “picture this” where I would see my son, born in January, having a birthday party at the local farm where there were horses he loved and a little sugar shack where all the kids could have hot cocoa, go sledding, have a bonfire where they might roast marshmallows. Maybe we could try a scavenger hunt in the snow for some grand prizes or something. And then he would look up at me all red-cheeked and happy and loved, and the other kids would think “Wow, she’s great” and the other parents would be so impressed.

Instead, we had to stretch out birthdays into birth months where my kids had to pick: party first then presents or presents first then party. One birth event per pay period. People felt sad for them sometimes, sure. My kids hated it sometimes too, and I felt bad about it. But no one ever expected more than a C+ birthday out of me at best.

All of this to tell you that I actually worked out the secret to birthday parties and it is this: You are never, ever, ever going to impress the other parents. Ever. I mean it. I have been to birthday parties for kids where the mom did spa nights and face painting, rented a limo to take the kids to the city for dinner and a show, and personalized shopping spree. Or a Harry Potter-themed birthday where kids got sorted into houses and played in tournaments. Kids who were 7 years old, by the way.

Think two hours; think mess somewhere that is not your home; think built-in help. These are the goals for the 10 and younger set.

These would be A+ parties if parenting was a fair and equitable world, but it’s not. Every time some parent throws an A+ party, there will be someone else who throws an A++ party, and what’s worse, the kids don’t even care that much. I wonder what it feels like to be a parent throwing one of those perfect kids’ birthday parties. Do they feel more connected to their kid after, made a friend or two, actually had any fun themselves? Or do they secretly wish, after all is said and done and they’ve climbed into their bed that night, that none of it was worth it? That raising the bar didn’t do anyone any good, in the end.

If you need evidence of this please see every photo of every Kardashian kid looking bored at their birthday party where actual Disney princesses are serving up castle cakes or dinosaur egg ball pits. Do they look more excited than a kid eating a hot dog on a paper plate at a bowling alley? Nope.

Bowling alley parties, now there’s an idea. I defy anyone to spend more than two hours at a bowling alley. Two games, bumpers up so no one suffers a gutter ball. Food included. Bring a cake, and there’s your chance to personalize the party with a theme. Skip gift bags; this isn’t the Oscars. This advice also applies to the other amazing birthday party venues like the movie theater (where they fully assign someone to organize the kids for you), indoor play parks like laser tag, glow-in-the-dark mini putt, even community centers if you’re feeling wild and want to put in a little elbow grease yourself.

Think two hours; think mess somewhere that is not your home; think built-in help. These are the goals for the 10 and younger set. Eventually, my kids got into sleepover birthday parties, which were easy for one important reason: no other parents. Their friends would come with their sleeping bags and pillows, and yes, at least one of them would get homesick by 9 p.m. every year, but mostly it was fun. Order pizza, give them flashlights, sparklers, foam light sabers. Tell them to play outside. Bake a Duncan Hines with sprinkles, let them sleep in the living room and watch movies or play video games while you read a book in the other room.

Give yourself permission to ease out of the birthday party game. Be OK with turning in a C+ party. Pretend you’re a single mom and no one expects anything from you. The freedom. You just have no idea.