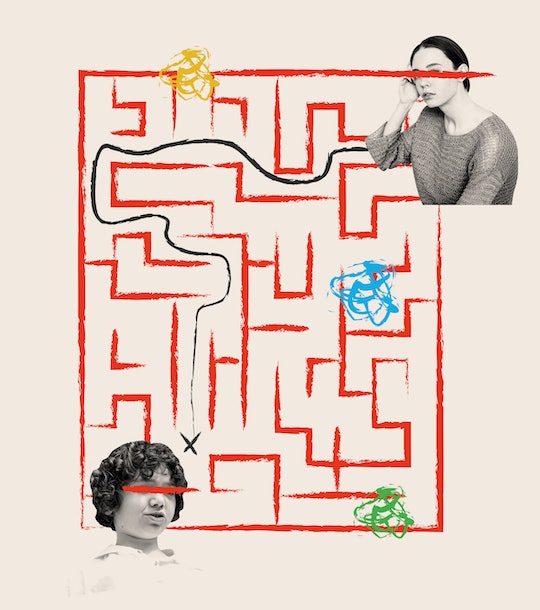 How To Parent When You’re Not One, But In Love With Someone Who Is

I am not the mother of my boyfriend’s child — she is an active and loving figure in his life. I am simply additive, a buddy at best; a threat at worst.

We’re singing “Skinnamarinky Dinky Dink,” when I tell him I love him for the first time. I didn’t think about the chorus when we started, but by the time we hit “dinko doo,” my heart is racing.

At 3 1/2 years old, he can’t possibly know the significance of the word love, the ultimate feeling, bestowed only on the most important of relationships. He can’t know that his father said it to me, the first time I’d heard it from a romantic partner in a decade, then, weeks later in an act of both cruel and touching honesty, admitted he wasn’t sure he meant it. He wasn’t sure he could feel it after his still-recent divorce, and, after a long history with men incapable of love, I wasn’t sure I could wait and see. But his insistence that he just needed time, that it wasn’t me, it was him, his pleading for patience, and the speed with which he scheduled therapy when I asked him to, made it possible for me to wait, and for him to tell me when it finally happened.

But before all that, I’d already fallen in love with his son, too. My relationship with Ben is new, not yet a year, but it’s moved quickly in quarantine and now I’m a regular presence in his son’s life. I am constantly working to tincture my affection with this child. With each interaction I find myself assessing if I’m showing him too much or too little. I am not his mother; she is an active and loving figure in his life. I am not even his stepmother. I am simply additive, a buddy at best, a threat at worst. If I had it my way, I would read him bedtime stories and kiss him goodnight, hold him when he cries, and tell him I love him as much as I can so he knows it. But this isn’t about my way, or what I want.

If I had it my way, I would read him bedtime stories and kiss him goodnight, hold him when he cries, and tell him I love him as much as I can so he knows it. But this isn’t about my way, or what I want.

Most of the time, we have fun. He jumps up and grabs my hand when I arrive, leads me down the hallway into his room where I plop on the floor among his toys and start making the voice of a stray character I grab from the box, trying my best to expose him to more emotional play at his dad’s, not just trucks and buildings (Ben’s specialty). We play for a long time; Ben brings me a cold glass of wine and I forget it’s there because I actually like listening to this child describe how the empty cardboard box is actually a boat and this wooden cow is the chef and the triangle Magna-Tiles are pizza slices. When I get so excited that I grab a plastic motorcycle and declare it a speedboat, he says with a dash of admonishment but mostly embarrassment on my behalf, “No, Emily, that’s a motorcycle,” and I do everything I can not to laugh.

When I invariably get a little bored and cramped and excuse myself to the living room, he comes running out declaring that he wants to play with Emily and this is so touching I barely hear Ben say that it’s grown-up time before I’m back on his rug asking for a magnetic slice of pepperoni.

But then, there are days when he’s tired or hungry or has just come from his mom’s and is in the midst of the transition, and my arrival elicits nothing short of disdain. “Go away, Emily,” he says, waving his little hand. One night before bath time, the first time he said, “I want Emily to go home,” I had to step into the bathroom so as not to completely lose it in front of him. I snuck as surreptitiously as possible, horrified that I was the one crying while in the presence of a 3-year-old, making sure it did not last longer than an average bathroom visit, took deep breaths, and wiped my eyes with abandon. Emerging into the living room, I quickly reached for my coat, cursing the fact that I couldn’t simply vanish into thin air, but Ben pulled me aside. “We can’t cater to a 3-year-old’s every demand,” he said with a kind, sympathetic smile, a smile that I know by now is always on the ready, even during the hard parts. Denying this small child his wish hadn’t occurred to me, since I’d plotted every move I made since meeting him with the sole purpose of gaining his affection. Ultimately, I offered a compromise: I said goodnight with a wave before retreating to the bedroom to read, and bedtime activities ensued with dad.

Denying this small child his wish hadn’t occurred to me, since I’d plotted every move I made since meeting him with the sole purpose of gaining his affection.

I like to think our moments together are building toward something, but it’s not always clear. Last week we took him camping for the first time. I took him down to the lake, held him on my hip as we walked in the water, his big little feet dangled and splashed, and he giggled as the cold hit our waists. When he wanted to get out, I sat him on the shore. Each time I went under water his face lit up. “Do it again! Do it again!” he shouted from the sand. We all slept in the same tent that night, and I sat with him and his dad for the first time reading bedtime stories and listening to Ben sing bedtime songs softly. Sometimes we play house and he deems me the mommy and we snuggle in our home and he pretend-falls asleep beside me. These little moments must mean something, I tell myself.

The next time I see him, he shoos me away and my breath catches in my throat; it feels like a piercing. But I don’t have to go to the bathroom and cry. I tell him it’s great to see him, that I’ll be in the bedroom reading, and to have fun playing with dad. When I come out two chapters later and try a seat on the couch where he sits, entranced by a grown man in a goofy hat and orange suspenders who I am now uncomfortably familiar with, he lays his head against my arm, updating me about the trucks on screen. When his dad tells him he’s had enough Blippi, we start singing.

I am not someone who thinks having children makes your heart bigger, your world better, or your life more full. I think every version of a life can bring joy and warmth and fullness in a million different ways.

I am not someone who thinks having children makes your heart bigger, your world better, or your life more full. I think every version of a life can bring joy and warmth and fullness in a million different ways. And now I feel my heart growing in this way, like exercising a very specific muscle, it tears and rebuilds, bigger and stronger in that one spot.

He’s making sense of his world and I can only be as much as he needs me to be right now. At present, that’s voicing characters that will inhabit his Magna-Tile masterpieces, singing nursery rhymes, and letting my hand hang for him to grab if he needs it. He needs a friend, he needs consistency, he needs to know that even if his parents aren’t together, they’re still his parents, and they love him very much. A lot of people do.

He moves on from “Skinnamarink” to “Down by the Bay.” I follow his lead, feeding him the next line when he slows down searching for the words.