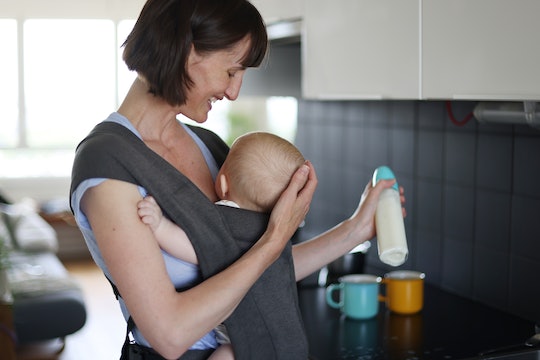 When I fill a bottle for my daughter, it’s an expression of love, filled with its own type of magic.

Moments after my second daughter was born, I held her to my breast, guiding her mouth to latch. She drank the milk fat, greedily, and the nurses clapped for her, cheering our breastfeeding relationship.

Inside, I recoiled. I had made the decision months before that I would exclusively formula feed — years before, actually, after three months of increasingly desperate attempts to breastfeed my first daughter had directly contributed to my postpartum depression and anxiety. I decided I would breastfeed once and only once, immediately after her birth for the small benefits of colostrum, the minimal protection of some possible Covid antibodies that might pass from me to her from the vaccine I’d received during pregnancy — the only such possibility of protection available as we lingered, two years into the pandemic, without a vaccine for children under 5.

Once my daughter had stopped drinking and fell into the deep sleep of a newborn, I reiterated to the nurses in the room that our decision was to use formula moving forward. I reiterated it again after we were transferred to the recovery room. And again every few hours throughout the night as we called the nurses’ station yet again for another 2-ounce bottle, the only kind they would bring and only a few at a time, our daughter wailing for more as we waited. I said it again, the next morning, alone with my baby as my husband searched for coffee, to the unasked-for lactation consultant.

Formula was the absolute right decision for myself, my baby, and our family. For us, formula was unequivocally "best."

On the way out, I glared at the breastfeeding promotional posters that lined the hallway of the birthing unit and the lobby of the hospital. At home, I threw away the thick folder of discharge instructions with page after page of breastfeeding tips. I wore a tight sports bra around the clock and rolled my eyes whenever I opened a can of formula and spied the breast is best stamped on the bottom.

Formula was the absolute right decision for myself, my baby, and our family. For us, formula was unequivocally "best." Yet it felt like the entire postpartum world could not handle this information and was hellbent on convincing me it was wrong. And it only got worse when the formula shortage hit.

TRY BREASTFEEEDING! [sic] Bette Midler tweeted obnoxiously last month as store shelves stood empty and parents desperately searched for many babies’ only food. She wasn’t the only one to offer this ridiculous advice to the crisis, with many others chiming in with their unsolicited suggestions about what formula-feeding parents should do. Almost immediately the conversation was diverted from very urgent, practical information to help parents who needed formula, and into yet another ideological debate about breastfeeding. Article after article about the shortage rolled out, nearly all of them built on anecdotal ledes from mothers sharing their laundry list of desperate attempts to breastfeed, as if they needed to establish their bona fides as mothers before oh-so-reluctantly turning to formula.

Pieces supposedly about the shortage uplifted and centered breastfeeding, like a gravitational pull, reiterating the difficulties of breastfeeding, systemic problems that affect breastfeeding rates, inadequate pumping laws, the same limited, shaky evidence that is used to exaggerate its benefits, even a lengthy interactive feature chronicling the time and money a reporter spent breastfeeding to prove that “breastfeeding isn’t free.” (We know.)

When I fill a bottle for my daughter, it’s not a last resort, but rather a beautiful, perfect expression of love, filled with its own type of magic.

I read each one, a formula-feeding mother desperate to understand everything that might impact my baby’s food source, and found myself, and other parents like me, erased over and over again. I read and saw the same message repeated ad nauseam: Formula was OK when it was unavoidable. A desperate option. A last resort.

And I’m angry. Because when I fill a bottle for my daughter, it’s not a last resort, but rather a beautiful, perfect expression of love, filled with its own type of magic.

It’s bouncing my daughter on my hip to quiet her as my husband watches the thermometer in the bottle as it sits in the warming water, waiting for it to reach the perfect temperature. It’s shaking the powder and water together with the expertise of a lifelong bartender to eliminate as many bubbles as possible, to get the consistency just right. It’s literally being able to watch, like Tom Sawyer at his own funeral, as my daughter bonds with her dad, her aunts, her grandmothers.

It’s not a last resort, but a comforting, enveloping ritual, passed down from the other mothers in my life. My mom who showed me how to use the soft, stitched fabric of homemade burp clothes under her chin to keep the formula from dribbling down her front. My sister-in-law who reminded me to always wipe and wash her neck folds after a ravenous feed.

It’s not a last resort, but a community. Thousands of people sharing tips and tricks and best practices for all the things that aren’t printed on the back of the formula container: traveling with formula, storage, and, most importantly, assurances. Groups that have organized and activated during the crisis, getting formula to babies while newspapers and celebrities squawked about breastfeeding.

It's not a last resort, but a first choice. The joy of a milk-drunk baby in a bassinet, her arms stretched above her head in complete surrender. The sounds of pure delight she makes when she drinks her bottle, the slurps and glugs of ecstasy as I satisfied her one and only need. The unadulterated role of her older sister as protector, already cemented, as my eldest wordlessly slips from her seat at the table, picks up the bottle, and slides it into her baby sister’s lips, announcing to myself and my husband, busy with dinner prep, that “It’s OK, I’m feeding baby sister.”

For many parents like me, formula feeding is a first choice. And it would be for many, many more if we could escape the decades of shame and myths surrounding formula.

People argue that now is a time to talk about breastfeeding, the traditional “women’s issue” suddenly front and center. Like a friend who makes every story about them, they want to use the formula shortage to talk about the constellation of privilege and resources one needs to breastfeed, to reevaluate systems and values that might help lower the number of moms who end up formula feeding. Recently released American Academy of Pediatric guidelines reinforce this, the blithe and frankly thoughtless recommendation of breastfeeding for two years, using scant evidence for their overblown claims to the benefits and pretending that the suggestion of “nonjudgmental conversations” will prevent the perversion of the recommendation by breastfeeding advocates.

And while I understand their logic and also support some of the policies they suggest, especially those that will benefit all parents (like longer, guaranteed paid leave), I can’t condone their end goal. I cannot forget the very real fact that heavily and authoritatively pushing breastfeeding only works to limit a person’s bodily autonomy and strip them of a personal choice. Policies created in this way only work to reinforce a social stigma, creating an unnecessary and dangerous hierarchy with regard to public health information that can have horrific (and even deadly) consequences.

Heavily and authoritatively pushing breastfeeding only works to limit a person’s bodily autonomy and strip them of a personal choice.

As with abortion, a goal should never be how to reduce the number, but instead to ensure, encourage, and celebrate that every person has the access and ability to make the choice they want. As with abortion, no one should feel pressured into sharing their tragedy or trauma in the hopes it might more effectively justify their choice. As with abortion, people should feel supported and emboldened and, yes, loved and championed by their decision, by the creation of and raising of their families in the way that works best for them.

For many parents like me, formula feeding is a first choice. And it would be for many, many more if we could escape the decades of shame and myths surrounding formula. When looked at this way, how could anyone possibly push for limiting or restricting the options a new parent has access to?

There are still many things to be discussed in relation to the formula shortage, including how it was allowed to happen, the way the industry is set up, and the imposed regulations on importing formula. But as new mothers were spending precious hours not “sleeping when the baby sleeps” but instead desperately calling pharmacies and grocery stores, or relying on family members out of state to overnight-ship them supplies, and as mothers of medically fragile children who relied on formula for their children’s lives were ignored and left out of the conversation, the one thing that should not have had center stage during this crisis was breastfeeding.