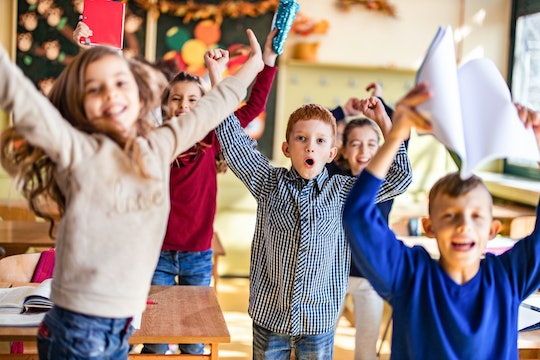 The freeze dance phenomenon isn’t a new sensation. Long before we had Pandora or Spotify or Apple Music playlists with built-in pauses, moms and teachers were punching stop on boomboxes at every birthday, drama class, and elementary school wiggle break. But today it’s oh so much easier to get kids up and moving and having fun with music. These 23 freeze dance songs and playlists will have your shaking if off faster than you can say “T Swift.”

Better yet? These playlists were designed specifically with kids in mind, so you also won’t have to censor the lyrics yourself by loudly singing over them or racing to your iPhone in time. Some even have instructions for kids on when and how to freeze each time the music stops sparing you the sometimes difficult task of explaining a game to a room of rowdy children.

With these playlists in your cue, you can redirect kids' crazy energy and get their blood flowing, then slowly transition back to a more quiet activity. Trust the process, teachers use this method all the time. And, chances are, you’ll like these playlists so much, you might find yourself dancing to them, maybe even on your own!

Pandora has been around since 2000, which means it still likely holds some of your oldest and most beloved playlists. But, now that you have kids, it’s time to make room for some new songs. And freeze tunes should be among them. Now you don’t have to make your own. You can find some great ones already on the platform. Get started here.

If you have a visual learner, try playing freeze dance songs on YouTube. The added bonus is that the videos often include cartoons or kids acting out the song instructions so your little one can follow along. Plus, they’re just super silly and make for a great diversion when your child really needs to get the wiggles out.

Spotify, in many households, has become the music streaming source of choice and that’s thanks to its huge catalog of songs. But those tunes aren’t limited to the latest pop releases or indie hits. There are loads of kid songs too and some savvy Spotifiers have even compiled the best of the best into handy playlists parents can use.

Apple Music is a hotbed of kid music. And, naturally, these artists have figured out the formula. If you’re going to put out a kid-friendly album, it better include an original freeze dance song. You’ll find plenty of fresh beats here, from freeze music about animals to a new take on the Hokey Pokey (and they said it couldn’t be done!).

Ready to move your groove thang? Get popping with these freeze songs and playlists.