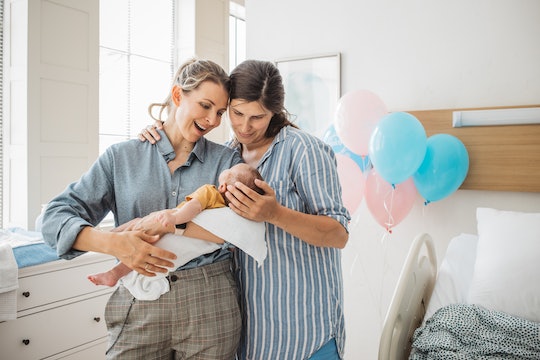 As The Non-Bio Mom, I Always Felt Like My Son’s “Other Mother”

The longer I’m a mom, though, the clearer it becomes that alienation is one of the most universal parenting feelings.

I felt like an other mother before my son was born. At the time, I diagnosed myself with a novel condition I called belly envy, a lesbian-specific complex in which one develops jealousy surrounding the pregnant partner. Symptoms included: feeling excluded, irritability, irrational urges (such as zipping off your wife’s stomach and attaching it to yourself), and clinically significant levels of concern for your wife’s physical safety. Most distressing, though, were the preoccupations about my lack of shared molecules telling me I would be perceived by my newborn as a stranger.

When my son arrived my sense of other-motherness spiked. I felt frantic that he wouldn’t know who I was. For his first weeks here on Earth, I wanted to hide our family of three on a faraway island, so we could bond without interference. Watching his genetically related family members hold him made me sick with envy.

We didn’t leave our Brooklyn apartment for a life of solitude, though, and while I carried my otherness with me, soon I was submerged in soothing, bottle making, bottle scrubbing, and near constant awakeness, leaving me little time to think about it.

During this time, I developed a psychic ability to wake up 30 seconds before he started screaming in the night ready to eat. And it was me, not his DNA-compatible mother, that best quelled him when he experienced evening episodes of a kind of cry described by the Internet as “occurring just because.” I understood that being alive is tough, so the idea of purple crying was not strange to me.

I found myself spending more and more time fantasizing about solitude.

While the sense of other-motherness faded in relation to our growing, mutual attachment, fresh forms of otherness sprouted. I felt the novel monster mother one morning when my newly walking baby wouldn’t stop tearing every book off our shelf. He was also screaming, happily, just practicing his lung capacity while heaving books. No shushing or distractions or Cocomelon video could stop him. I watched as the cover of Elie Wiesel’s Night was torn into two. Before I could explain to my son that he had committed a hate crime, the thicker-than-a-Bible biography of Diane Arbus shot across the room and hit our tiny schnoodle. The clock read 6:40 a.m., and for a moment I felt sure I would never make it through the day.

I survived that day, and the next, but I found myself spending more and more time fantasizing about solitude. There I was, sleeping in a cabin upstate deep in the forest, baking in an oversized kitchen somewhere lush and clean a la any Nancy Meyers film, and there I was sitting in loud bar, guzzling cheap beer and flirting with the bartender as if I didn’t have a life on a ninth floor apartment overlooking a school yard and church steeple.

At the playground feigning interest as other tired parents talked about sleep schedules and teething toys, I felt like an alien. They spoke like experts on en vogue child development (no, I still haven’t read Cribsheet), and not only could I not keep up, but I didn’t care. I wanted to gossip about Erika Jayne’s legal woes or hypothesize about who the killer was in Big Little Lies. At the park, a half circle of moms stood holding babies while lunging. The more athletic ones held their babies out directly in front of them with straight arms. I strolled my son past, avoiding eye contact radiating with secondhand embarrassment. I felt disconnected from mommy culture, and although I didn’t want to be part of it, it was isolating.

My son is now 3. He is cautious and hilarious like my wife. They have identical chins and matching dark brown eyes. He is concernedly stubborn and stops to sniff flowers and examine sidewalk bugs like me. While he is not molecularly mine, he is clearly of me.

It was during this spike of isolated mother that I interviewed Nina Renata Aaron about her memoir Good Morning, Destroyer of Men’s Souls. Knowing she had also written the essay On Why Middle-Class Parents Are Awful, I couldn’t help but ask her about parenting. “Do you have any mom friends yet?” I asked bluntly.

She laughed and told me that eventually was able to make mom friends who were more like her, “slightly more broken, honest, depressed, just people who are more real about how challenging it is. And those have tended to be moms who are single moms, people who make a living in nontraditional ways, people who've been through some stuff.” It was the first time my other-motherness connected me to another parent, and it was a salve. After the interview, I felt motivated to lean into my complicated feelings about parenting. For the first time I could see a world where I could find connection with other parents and maybe that would tamper my sense of otherness.

Since talking to Aaron, I’ve been trying to pay more attention to all the other mothers in plain sight. In Chloe Caldwell’s new memoir, The Red Zone, she writes about how “being a stepmom has some undertones of what being queer feels like; they can both be invisible.” Writer and singer Allison Moorer writes of the isolation that being a parent to a nonspeaking autistic child in her book I Dream He Talks to Me. On a particularly difficult pandemic parenting day, I stumbled across the poem Motherboard by Kate Baer, and I’ve marathoned every available season of Workin’ Moms. Every little bit helps.

My son is now 3. He is cautious and hilarious like my wife. They have identical chins and matching dark brown eyes. He is concernedly stubborn and stops to sniff flowers and examine sidewalk bugs like me. While he is not molecularly mine, he is clearly of me. Most days, I feel securely attached, and I’m starting to become more confident in who I am as a parent. Occasionally other-motherness rears, but it no longer feels as visceral — or as threatening.

I’m trying to embrace all the mothers inside of me instead of reading them as a sign of inadequacy. The more media I consume and the more I talk to other people, the clearer it is that feelings of otherness are the most universal parenting feeling of all.