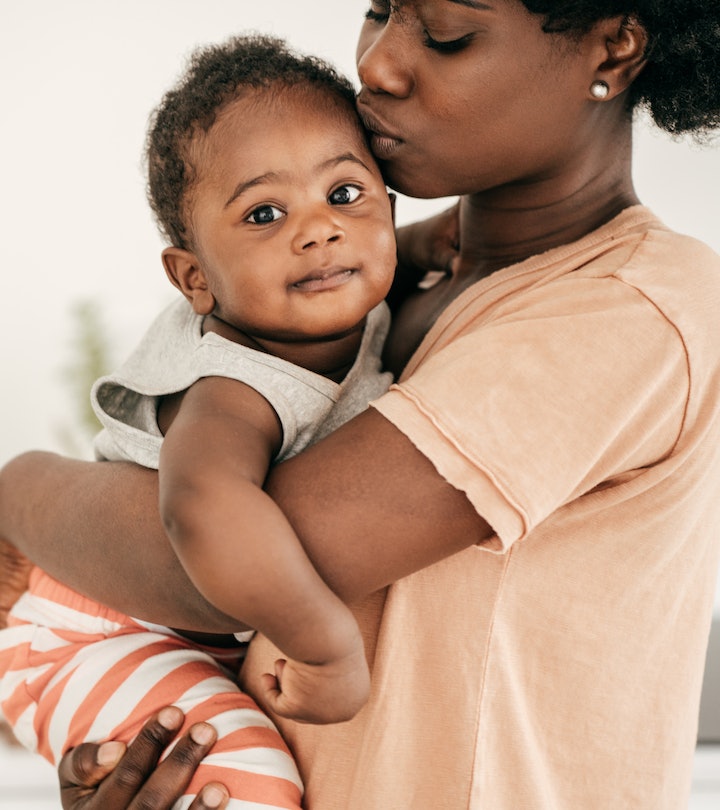 How Long Does A Baby’s Cold Usually Last? Experts Explain

Taking care of a baby that has a cold is exhausting. Not only is it stressful to see them so uncomfortable, but it also seems like the cold is never going to end. But for real, how long does a cold last in babies? You know it will end — rationally, at least — but it can feel like infant colds go on for weeks. And, if you’re a new parent who doesn’t yet know what to expect, the first virus can really feel scary. Babies get colds, and typically it’s nothing to worry about. Every virus is a little different and so, as with any other type of illness, the length of a cold in a baby can vary. Still, it’s helpful to know how long baby colds typically last. Knowing what’s normal and what’s not can help you make an informed decision on whether or not to take them in to see the pediatrician and when you should try to just chill out and enjoy the extra snuggles and usually accompany a runny nose.

How long does a cold last in a baby?

Colds in babies can last anywhere from a few days to a couple of weeks. “A cold can last anywhere from 4 to 14 days,” says Dr. Melissa St. Germain, a pediatrician, vice president and medical director of Children’s Physicians and Urgent Care at Children’s Hospital & Medical Center in Omaha, Nebraska. “Most of the time, symptoms will start to improve within a week, but it’s not uncommon to have a cough that lasts longer.” So, if your baby has been congested for a little more than a week, you might be feeling miserable but rest assured that it’s well within the range of normalcy.

How long are babies contagious when they have a cold?

Babies are notorious for spreading colds like wildfire, especially among other little ones. Obviously, babies don’t know how to cover up their coughs and sneezes, they can’t blow their noses, and they don’t wash their hands before grabbing everything in eyesight. Knowing how long they’re likely to be spreading those germs is pretty important.

“The most contagious part of the cold is the beginning,” St. Germain says. “Colds can actually spread for a day or so before symptoms really start.” They’ll stay contagious throughout most of their cold, but it will get less contagious as it goes on. “They are less contagious when they have been fever free for at least 24 hours and are also in the phase in their illness when their symptoms have peaked and are starting to get better,” says Dr. Jessica Madden, a board-certified pediatrician and neonatologist, and an International Board-Certified Lactation Consultant (IBCLC). “This is usually after the first week or so since the onset of symptoms.”

What are the symptoms of a cold in a baby?

Cold symptoms in a baby are pretty much the same as in an adult. “Colds are caused by viruses that infect the upper respiratory tract (nose, throat, and upper airways),” St. Germain says. “The virus causes an inflammatory response by the body’s immune system.” This leads to an increase of mucus, which causes common cold symptoms like:

How to make a baby with a cold more comfortable

Clearly, babies have no idea how to deal with a cold on their own. They have no way of getting rid of congestion like adults do, and there are no cold or cough medications that are safe to give them. It’s enough to make any parent feel totally helpless. However, it is definitely possible to make a baby with a cold a little more comfortable. “Usually the snot is a big factor, so using nasal saline and removing excess mucus with a snot-sucker are key,” St. Germain says.

Hydration is really important when it comes to fighting off a cold and easing cold symptoms, so offer lots of extra fluids to keep mucus thin and easier to get rid of. If your baby is too young to have water, that means offering extra breast milk or formula. You can also run a humidifier or vaporizer in their room at night to make breathing easier, Madden suggests.

Medication can also sometimes be an option, if your baby is over six months and your pediatrician has confirmed an appropriate dosage. “Babies over six months can have either Tylenol or Motrin (ibuprofen),” Madden says. However, don’t feel like you have to give medication if you notice their temperature is elevated. “Fever is not dangerous — it’s the immune system’s way of trying to kill germs,” St. Germain notes. “But a fever can make baby not want to drink as well, so bringing the body temperature down with things like acetaminophen and room-temperature baths can help.”

When to seek treatment for a baby with a cold

The common cold sounds innocent, but in babies, it can take a more serious turn. Keep a close eye on your little one’s breathing to look for signs of respiratory distress. “This includes fast breathing, labored breathing, noticing that the skin between the ribs is sucking in and out with every breath (retractions), and/or noisy breathing,” Madden says. If you notice any of these things, call a pediatrician or go to urgent care immediately.

Paying attention to their diapers is also important. If they aren’t having at least four wet diapers per day, St. Germain recommends checking in with their doctor. And take note of their temperature. “A fever of 100.4 or higher in a newborn is an emergency, and any newborn with a fever needs to be seen right away to be evaluated for bacterial infections, like meningitis,” Madden says. If your baby is over three-months-old and has a fever over 101 degrees Fahrenheit, she also recommends calling the pediatrician.

While colds can last for up to two weeks in a baby, both St. Germain and Madden recommend calling the doctor if they’re still obviously sick after that amount of time. “Although post-cold coughs can linger up to three to four weeks, all of their other cold symptoms (runny nose, congestion, and fever) should be long gone by this point,” St. Germain says. If they’re still having symptoms or if their fever has gone away and come back after two weeks, call the doctor.

A baby’s cold can last up to two weeks, but the most symptoms should largely be gone after a few days or a week. Cough and congestion can linger, but as long as they are breathing normally, sleeping and eating well, making wet diapers, and seem happy, they should be OK. As always, when in doubt, don’t hesitate to call the pediatrician — even just for a dose of peace of mind.

More Like This
Cradle Cap Is Normal & So Is Your Desire To Get Rid Of It. Here’s How
A Parent’s Guide To Stomach Pain In Kids
When Does A Baby Recognize Their Father? A Pediatrician Explains
Why Is My Vagina Itchy? Experts Explain
What Parents Are Talking About — Delivered Straight To Your Inbox