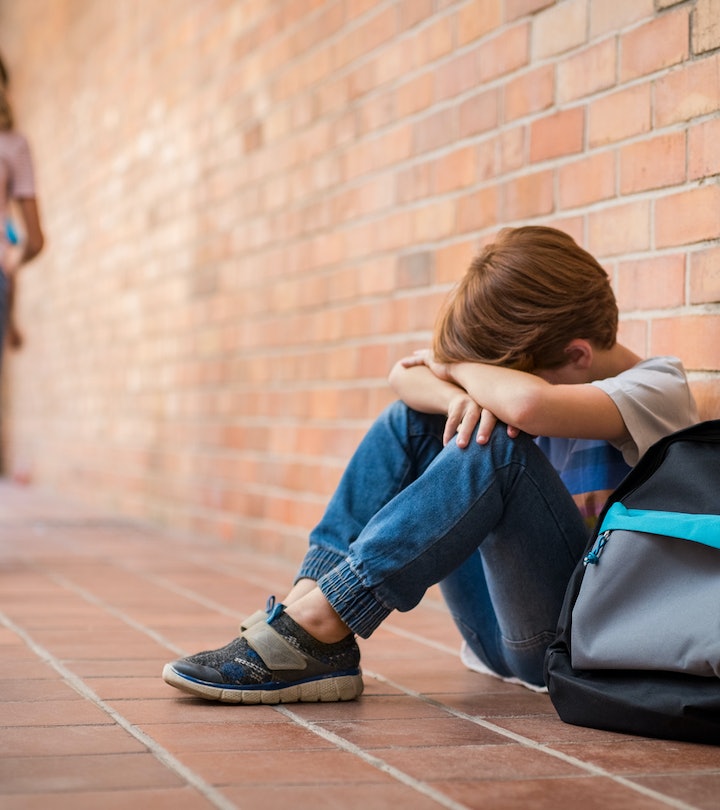 The Number Of Kids Bullied Each Year Is Truly Heartbreaking

But you’re not helpless to stop it.

When we think about parents "in the trenches," more often than not we think of a new parent up all night with a sleepless baby or a dad at his wit's end with a tantrum-throwing toddler. But parents of older children have their own trenches to navigate, and the problems are often more complicated. No parent wants to imagine their child being hurt, physically or mentally, but there's no denying that bullying has become a scary, widespread issue. Just how widespread? Well, the statistics that show exactly how many kids are bullied a year are pretty startling. But that doesn’t mean that you — or your child — is helpless to stop it.

In the past few decades, more attention has been paid to the topic of bullying in schools and cyberbullying online than ever before — and rightly so. “Bullying is unwanted, aggressive behavior among school aged children that involves a real or perceived power imbalance”, according to StopBullying.gov — a website run by the U.S. government. Along with aggression, the key hallmarks of bullying are:

Bullying is most likely to happen during school hours, but it isn’t necessarily confined to the building. Bullying can happen on the playground or bus ride home, too.

Bullying comes in different forms. Your child may not get shoved into lockers or intimidated for their lunch money, but that doesn't mean they aren't being bullied. There are three main types of bullying: verbal, social, and physical, according to StopBullying.gov.

According to the National Bullying Prevention Center and research done by the National Center for Educational Statistics, 20.2 percent of students report being bullied. In other words, that means that about one out of every five kids will experience bullying. That’s a hard number to think about as a parent, but — if you hope to protect your child, or prevent them from bullying or being bullied — it’s helpful to know how common bullying really is. A few more bullying facts and figures from federally collected data shared at StopBullying.gov:

Statistics about the frequency of cyberbullying are similarly high, showing that about 16% of high school students reported that they had experienced cyberbullying.

How to tell if your child is being bullied

Sadly, according to the stats from the National Center for Educational Statistics, less than half of all kids who experience bullying end up telling an adult at school about it. Because it's such a common issue, parents and teachers alike must be on the lookout for the warning signs of bullying in kids. Ideally, your child would talk to you about what’s happening to them. However, it’s normal for kids who are being bullied to try to hide it, or to feel ashamed. Here are some signs of bullying that parents and educators can watch out for:

What if my kid is the bully?

On the flip side, it's crucial to be aware if your child is the one doing the bullying. It can be hard to imagine your own child as the aggressor, and even harder to discover it's true, but it's incredibly important to address the problem. If your child is coming home with new belongings, acting increasingly aggressive, hanging out with bullies, and frequently getting in trouble at school, they might be bullying others.

What is an upstander versus a bystander?

Knowing the stats — that more than 20% of school-aged children experience bullying, and most of them middle schoolers — can be overwhelming. But you’re not helpless. Help prevent bullying by talking about it with your kids and helping them understand it's unacceptable. The non-profit Stomp Out Bullying encourages parents and care takers to teach their children to becoming “upstanders” rather than “bystanders” if they find themselves in a situation that involves bullying. What does it mean to be an upstander? While a bystander stands passively by while bullying is happening, Stomp Out Bullying defines an “upstander: as someone who:

Teach your child how to get help, do your best to keep all lines of communication with your child open, and encourage them to come to you if anyone treats them poorly or if they’ve witnessed bullying. Most importantly, teach your children the importance of kindness and mutual respect. Teach them how to give it, and how to accept nothing less in return.

More Like This
A Parent’s Guide To Stomach Pain In Kids
101 "Would You Rather" Questions For Kids
I Took Drinking Out Of My Bedtime Ritual & Unfortunately, It's Great
These 72 Instagram Captions Are Perfect For Your Snow Day Pics
What Parents Are Talking About — Delivered Straight To Your Inbox

This article was originally published on Oct. 22, 2018