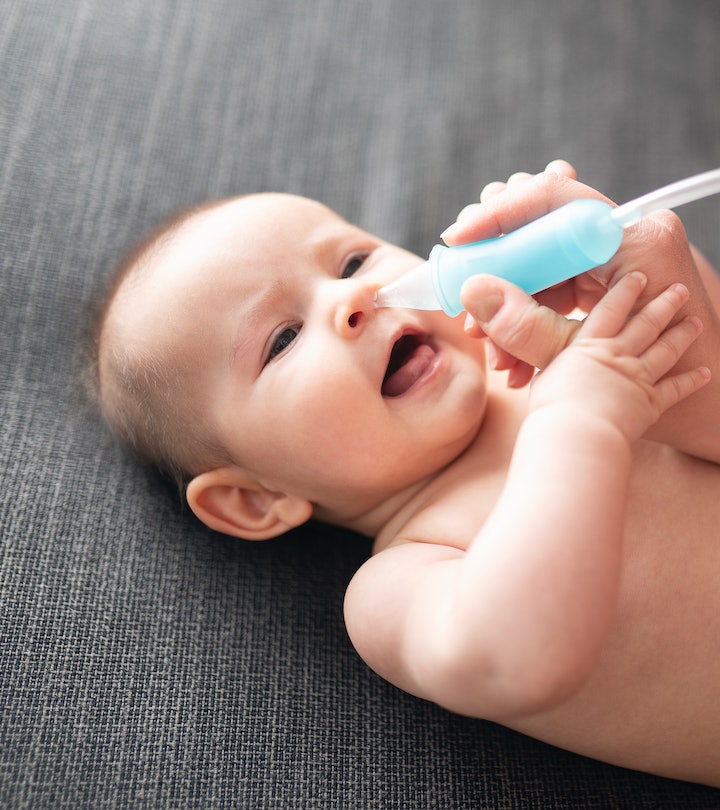 How To Clear Congestion From Your Baby’s Nose & Throat

Sometimes less is more when it comes to remedying Baby’s congestion.

For some babies (and their parents), cold season seems as if it’s every season — especially since trying to relieve a baby’s congestion often feels like a futile task. (Let’s face it, getting snot out of an infant’s nose is no easy feat.) But while caregivers want to do everything they can to comfort their little munchkins when they are congested (meaning ridding that mucus from baby’s throat and nose), they need to make sure they are doing it safely — and when it is appropriate.

“The most important question in deciding if and when and how to remove mucus is whether or not the mucus is bothering your baby,” Dr. Rebekah Diamond, M.D., pediatrician and author of Parent Like a Pediatrician, tells Romper. “If your baby is congested but comfortable and there’s nothing else you or your pediatrician are worried about, it’s really OK to leave it there.” Of course, parents and pediatricians alike know it’s hard to hear your baby sniffling and coughing — but it’s important to understand the causes of infant congestion, when to contact a healthcare provider, and, if necessary, how to get mucus out of baby’s throat and nose naturally (and with minimal tears).

Why your baby is congested

“Unfortunately, babies do get sick. This is a normal part of childhood, especially for infants in the first year of daycare,” pediatrician Dr. Krupa Playforth, M.D., FAAP, tells Romper. “Washing hands often and well, and keeping children away from sick people — or keeping them home when they're sick — can go a long way to minimize their exposure to illnesses, but it may not fully prevent it.”

Playforth explains that almost anything can result in an irritation of the nasal passageways (and thus an increase in mucus) — including a viral or bacterial infection, environmental factors that can cause rhinitis (or a stuffy nose), and reflux, which can cause a buildup of mucus secretions. While she adds that it is important to rule out or address any underlying health issues that may be contributing to congestion in the nose and throat, this condition in itself is pretty common in babies.

Also, a little congestion can often sound like a whole lot. “Many young infants, especially, can sound very congested because of a build-up of mucus — not because the volume of mucus is excessive, but because they have tiny nasal passageways which are easier to occlude,” Playforth adds. This, she explains, becomes less problematic as both the size of the passageways increases and the child is better able to clear them. Diamond also notes that babies’ breathing physiology — newborns breathe almost solely through their noses — is different from older kids and adults, making normal congestion (which a lot of babies are born with) that much more apparent.

But while common in babies, congestion “should be checked by a pediatrician or health care provider if it is causing issues with feeding or accompanied by a fever or irritability,” pediatrician Dr. Sara Siddiqui, M.D., FAAP, advises. Babies under 3 months should be examined for any congestion or cough (and before administering any of the home remedies or interventions below), and persisting symptoms in older infants should be addressed by a healthcare professional, as well. Basically, if a parent is concerned at all, getting your child examined is always the correct course of action.

How to remove mucus from baby's nose naturally

“The best thing to do is to focus on your child's comfort level,” advises Playforth. “Some parents get obsessive about removing mucus for the sake of removing mucus — and overdoing the removal can actually cause irritation and swelling of the nasal passageways, too. So do only as much as needs to be done.”

Of course, clearing the nasal passageways (after making sure there is no nasal trauma or bleeding and that the baby is breathing well) makes sense “if your child has thick secretions that are interfering with the ability to breathe comfortably or to feed (which is something we often see in young babies who are feeding from a breast or a bottle) … or interferes with the baby's ability to sleep,” she says. [Note: There is a difference between noisy breathing due to congestion and respiratory distress. Signs of respiratory distress (breathing fast, using muscles to breathe which causes the ribs to be exposed, nose flaring, or the neck skin tugging in) or any big breathing issue (for example from bronchiolitis), requires immediate medical attention, says Diamond.

So aside from letting a non-threatening viral infection run its course, here’s what caregivers can do to remove mucus and make their little ones a bit more comfortable.

Getting store-bought non-medicated saline drops into tiny noses is an art form (kids usually hate them) — but Siddiqui says that they’re often the best way to start clearing mucus congestion. In fact, sneezing away the gunk after use is actually good. “Using saline drops can decrease the thickness of the mucus, making it easier to clear on its own,” she explains, adding that they can be administered three to four times a day as needed and caregivers should make sure the packaging clearly states non-medicated. “If the nasal congestion is not too thick and not causing other symptoms, like difficulty feeding or sleeping, then it would be all right to let it resolve naturally.” Again, she does note that use of these and any at-home interventions for babies under 3 months should only be under the supervision of a pediatrician or health care provider.

Carefully suction with a syringe bulb

A small, clean suction bulb (or a nasal aspirator like the popular Nose Frida) — in conjunction with saline drops to first loosen or thin out the mucus — can literally help suck out some of the snot, especially before feeds or sleep time. Siddiqui, though, emphasizes that extracting mucus should be done gently. “Sometimes overuse of the bulb syringe may cause irritation in the nasal passage,” she explains. “If the nasal passage is getting irritated or becoming red then it is best to continue saline nose drops without using a bulb syringe. Using a non-medicated ointment such as Vaseline or Aquaphor would help skin irritation secondary to mucus congestion around the nose area.”

Turn on a cool mist humidifier

They might be a pain to clean (and ridding them from bacteria is super important), but a cool mist humidifier, says Playforth, can help keep the air moist and therefore help ease stuffiness. (Keeping babies well-hydrated and the environment free from irritants also helps.) Playforth does, though, warn against the use of “essential oils or other aromatherapy as some of those products have been associated with bronchospasm [a tightening of the airways] and airway irritation, and they are not effective.”

Getting phlegm (often the thicker secretions from the lower respiratory tract) and mucus out of a baby’s system is often challenging, notes Playforth. But there are ways to make your baby a bit more comfortable if the symptoms seem to be bothering them.

Address congestion in the nose

“Postnasal drip happens as a result of excess mucus which goes backwards rather than out of the nares,” explains Playforth. “For babies, this is a common way that mucus goes because they aren’t able to blow their nose.” Siddiqui also notes that postnasal drip, and subsequent coughing, can be caused by “increased congestion from the adenoids that sit above the tonsils and may drip down the back of the throat causing irritation and pain.”

So what can be done? Playforth suggests using saline drops, and — if necessary — suctioning out the nose to help decrease the amount of postnasal drip that can occur. And while sleeping with congestion often leads to a lack of sleep (for both babies and parents), she reminds caregivers to “not raise the head of the bed [or] incline the baby in an effort to try to help prevent postnasal drip,” as guidelines state the importance of babies being put to sleep on a flat surface and on their backs.

There simply isn’t an easy way to remove mucus from the throat, but Playforth notes that “hydration will help wash down sticky mucus that is hanging out because of postnasal drip … and the natural mechanism of coughing serves to do this to some extent as well.” Siddiqui also explains that even a small amount of clear fluids (with medical supervision for babies younger than 4 months) will help to thin out whatever mucus is in the back of the throat.

Sit with your baby in a steamy bathroom

Think of it as a baby-and-me spa day! Well, not exactly, but this natural remedy for breaking down mucus is a favorite among pediatricians. “Steam inhalation can work to help break up some of the thicker secretions,” advises Playforth of how to loosen congestion in the nose and the throat. “The best way to do this is to turn on the shower and wait until the bathroom mirrors get foggy. Then sit in the bathroom with the baby for 10 to 15 minutes.” Playforth adds that, in terms of breaking down mucus, “some gentle rubbing or patting of the back may help, especially if you also hold your baby upright — but it is important to make sure you are not shaking the baby vigorously.”

Use a syringe bulb in the mouth — gently

While Diamond says that “just a gentle suctioning of the mouth is fine with those little bulbs,” she notes that it can be irritating and there is often no need, unless recommended by the pediatrician. Playforth emphasizes this should be done in the cheek and absolutely nowhere near the throat.

Are there any decongestant medicines safe for babies?

The short — and long — answer is no. The American Academy of Pediatrics (AAP) generally does not recommend these types of medications for children under 6, but in some instances, doctors might recommend it for children between 4 and 6, says Playforth. Says Diamond, “the reality is that they just don’t work and they have a lot of side effects.”

Diamond also cautions against companies that market their medicinal products as natural. “I just like to remind parents that anything that is going to treat anything is a medicine,” she says. “If it says natural or over-the-counter, it probably means it’s just found a loophole to skip FDA testing. So, again, I would check with your pediatrician.”

For babies over the age of 1 (which is important because honey can be dangerous before then), Diamond suggests a spoonful of honey as the only cough medicine to go down for young children. “It is a great way to help a toddler with a cough,” she says, adding that it is “a true scientifically-proven cough suppressant.”

Of course, when it comes to babies and congestion (and barring any concerns or dangerous warning signs), Playforth reminds caregivers that anything you are doing to remove mucus should be done to improve a baby’s comfort level — not just for the sake of removing mucus. Adds Diamond, “Sometimes kids just want to sleep and rest and they’re safe and they’re going to be noisy [while breathing], and in a few days they’re going to be better.”

Dr. Rebekah Diamond, M.D., a hospital pediatrician in New York City, assistant professor of pediatrics at Columbia University, and author of Parent Like a Pediatrician

Dr. Krupa Playforth, M.D, FAAP, pediatrician based in Virginia and founder of The Pediatrician Mom

More Like This
14 Recipes For Sick Kids When Everyone's Tired Of Canned Soup & Crackers
A Parent’s Guide To Stomach Pain In Kids
When Does A Baby Recognize Their Father? A Pediatrician Explains
How To Celebrate Baby’s First Valentine’s Day, From Gifts To ’Fits
What Parents Are Talking About — Delivered Straight To Your Inbox