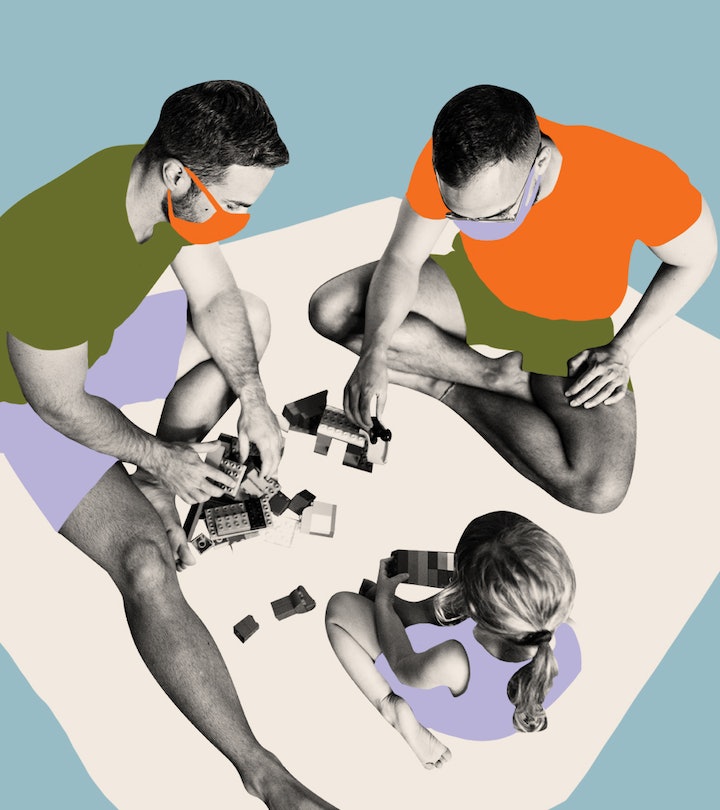 I Thought I Did Everything Right, But I Still Gave My Children Covid

In July, my husband and I took our first trip with friends since before the pandemic — to Provincetown.

I took the paper from the nurse and stared at the word “positive” that had been stamped in red across the top under my name. There it was: the word all of us have been trying to avoid for the past year and a half.

All I could think about was my kids. My 5-year-old daughter, Rumi, had crawled in bed next to me the night before, lovingly handing me a fresh tissue when I sneezed from what I thought were my allergies. Had I infected her? I’d taken a sip when my 2-year-old son, Xander, offered me his orange juice while sitting on my lap for storytime earlier that morning. Was he going to get sick?

And what about the rest of our family? My teenage nephew and niece had just arrived for a week’s visit and I had sat next to them at lunch the day before. And my in-laws, who were visiting from Dallas, were fully vaccinated but have all the typical underlying health conditions of seniors in their seventies. Had I infected them all?

And all because of what we thought was our “safe” summer vacation?

In July, my husband and I took our first trip with friends since before the pandemic. Within hours of landing in Provincetown, I read one of the initial news stories about the emergence of the Delta Plus variant. It filled me with a strange dread — like when you see a dark cloud on the horizon and wonder what’s happening on the ground beneath. But I shook off the dread, drank a martini, and felt sorry for people who weren't vaccinated yet.

A few days later,I was experiencing what I assumed were simply some severe seasonal allergies. Everything was blooming on the tip of Cape Cod. It never once occurred to me that my symptoms could be Covid-19. After all, I was fully vaccinated, everyone around me was fully vaccinated, and many of the places we went to in Provincetown required proof of vaccination to get in.

This was the beginning of my isolation. No hugs. No kisses. No snuggles. It felt surreal.

Twenty-four hours after getting back to LA, the texts, DMs, and social media posts started rolling in. Two people I had seen in Provincetown had tested positive for Covid-19. Then it was five people. Nine people. Within an hour it was 20 friends and acquaintances I had been dancing with just a few days beforehand. Everyone was fully vaccinated.

At the testing center, my husband Ryan started toward me as if to give me a comforting hug. But then we both realized: we can’t touch. He had to stay negative. He stood still at a respectful distance. We didn’t need to talk about it. We both understood the gravity of the situation. This was the beginning of my isolation. No hugs. No kisses. No snuggles. It felt surreal.

Back at home, as I was about to close my eyes for a nap that first day in quarantine, the bedroom door swung open and my masked children started to run into the room. I unleashed nothing short of a primal scream: “STOP!” Thankfully, they listened.

I tried my best to appear upbeat and optimistic and explain as much as I could from six feet away. I didn’t want to project my worries and anxieties onto them, but I also wanted them to understand that we couldn’t be physically together for a little bit. This felt like such a gut punch. All I wanted was to hold my kids.

I spent the next few days spiraling with anxiety despite my mild symptoms and my family's negative tests. I was mad at myself. How could I have gone dancing in a sea of mask-less strangers during a pandemic?

It wasn’t just that I had potentially infected my kids, but my sickness was preventing them from going to school or seeing their friends. And my in-laws had pre-existing conditions.

I was angry at every armchair scientist I follow on Twitter and at all elected officials in general. I couldn’t accept that no one had known Covid or its Delta variant was so contagious as to infect so many fully vaccinated people. I was perplexed that the testing facility we went to had no way of knowing if I had caught the Delta variant or just the original Covid-19 strain. Shouldn’t we have this figured out by now? And what about all the people I had no way of telling they had been exposed? Like my fellow riders on the ferry to Boston or the other passengers on the plane ride home. If I were them, I’d like to know.

Mostly though, I felt a sense of failure. I felt that I had failed my family. Failed my children. Failed myself. It wasn’t just that I had potentially infected my kids, but my sickness was preventing them from going to school or seeing their friends. And my in-laws had pre-existing conditions.

At the end of my ten-day quarantine, I tested negative.

But literally within five minutes of this happy news, sitting in that same testing-site parking lot, the earth dropped out from under us again. I got a text that our nanny had tested positive for Covid-19. She was also fully vaccinated. I had had zero contact with her since she’d last tested negative. So, the big question was: did I infect her or did she catch it somewhere else? And of course, she had been with the kids for eight hours a day, every day, all week.

Soon, the next shoe dropped. Rumi tested positive. My sweet 5-year old guiding light. I wanted to scream right there in the car. But I kept it together. Because her symptoms were so mild, Ryan and I decided not to tell her because it just felt as though it might cause her undue worry and stress.

This is when the dark clouds really moved in. My anger about this whole situation rekindled. I was livid, hungry for someone or something to blame. What benefit had my week-long isolation been if I still infected my daughter and possibly our nanny?

Then my in-laws started going downhill. They had tested negative, but they were clearly sick — sicker than I'd been, and needing to stay in bed.

The next morning Xander was showing symptoms. We got him tested again. Now he was positive.

And immediately after my in-laws got safely back to Dallas, they got re-tested. Positive. And my father-in-law had developed pneumonia. I knew that one wrong move could have dire consequences for them.

I kept an upbeat game face for the kids, though, who were thankfully in happy moods. Their mild symptoms started improving quickly. Our nanny recuperated quickly, and after a scary four days or so, and access to treatments, Ryan's parents recovered, too.

It’s destabilizing and dreadful when you think you’re incapable of protecting your family. Especially when you believe you’ve done everything right, or at least the best you could.

I believe that if we all started to think of our friends, neighbors, and colleagues as family, we’d quickly get down to business improving vaccination rates and saving lives. The truth is that we are all family. And we do have the ability to protect each other.