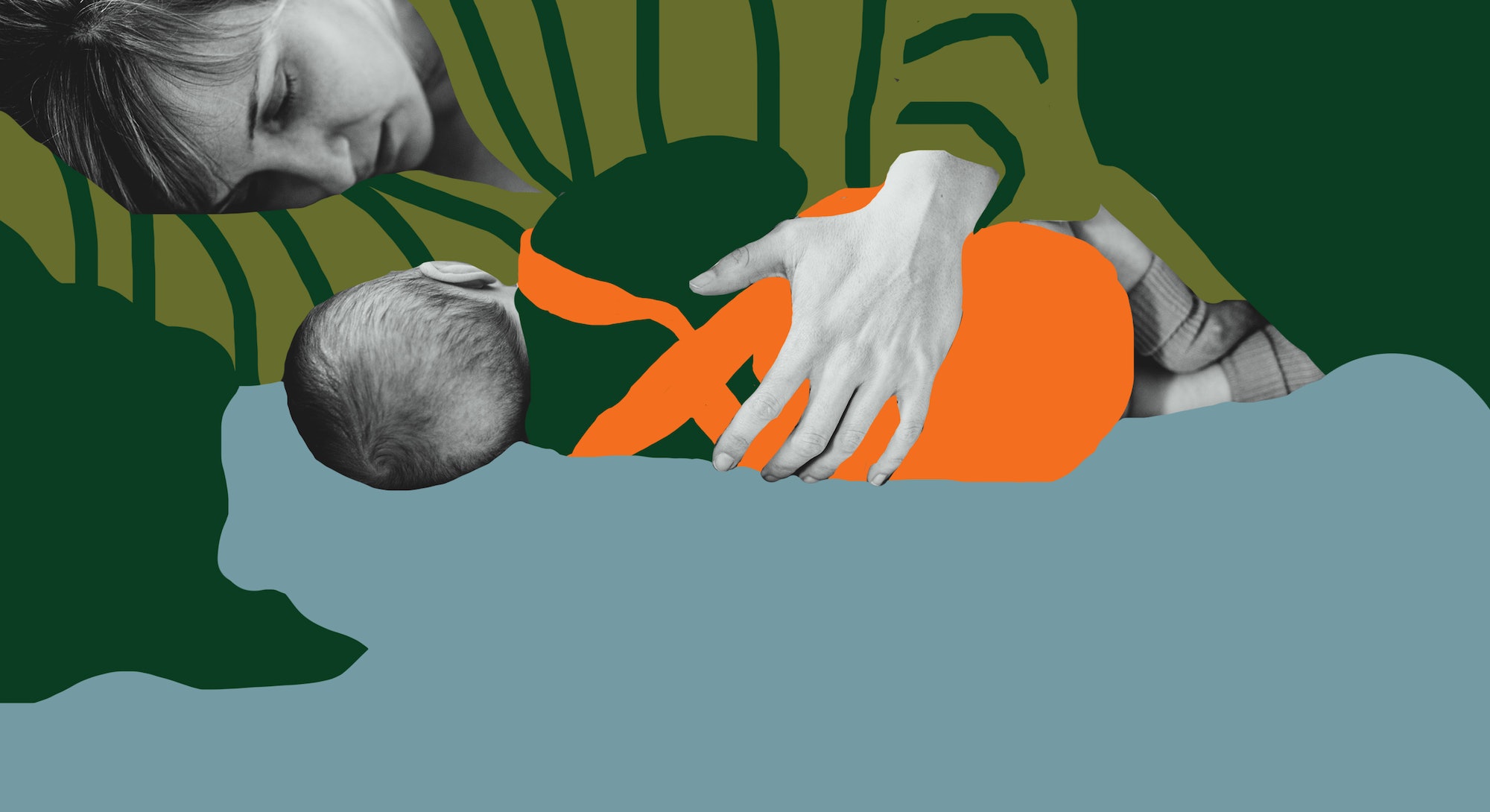 I'm Tired Of Lying To My Pediatrician About Bed-Sharing

For new moms like me, it is incredibly difficult to square the two pieces of advice — never bed-share, but also establish exclusive breastfeeding.

I’ll start with the confession: I shared a bed with my baby off-and-on for the first four months of her life. It started out of desperation. On our third night home from the hospital, my husband and I did something we were told was very dangerous: we lifted our screaming newborn from the bassinet and placed her in bed between us. My husband and our baby dozed off; I was too terrified to even close my eyes.

Even before I became a mom I’d heard the dire warnings about bed-sharing: it was unsafe, negligent, tantamount to child abuse. I remember seeing anti-bed-sharing campaign ads like the one showing a baby sleeping in an adult bed next to a butcher knife with the headline, "Your baby sleeping with you can be just as dangerous." After I gave birth, the doctors never even uttered the words “bed-sharing,” as if to keep the perilous idea from entering our heads. Instead, they repeated that we must always put our newborn in a separate place to sleep, on her back, with no blankets or pillows. At home, we tried sticking to their advice — following an exhausting routine of getting out of our bed to retrieve the baby, unswaddling her, moving to a rocking chair to breastfeed her, changing her diaper, re-swaddling her, rocking her back to sleep and then placing her once again in the bassinet — only to hear her wake up screaming within the hour. She needed to eat every two hours and wanted to be closer to us, closer to the cozy womb she’d called home for the previous nine months. I couldn’t blame her. I kept thinking there had to be an easier way.

It was my husband’s idea to bring her into bed with us. I resisted until my fatigue and our baby’s piercing screech broke me down. For several nights we did something that I now know is unsafe: we put our baby, who was wrapped in a swaddle, on a pillow-like lounger in between us. We told no one. Then, we got rid of the lounger all together and I started placing her right next to me on the mattress to sleep, just inches away from my breasts. When she woke up hungry every few hours, she would simply root around and I would turn her on her side to eat before falling back to sleep. It seemed too easy. So when our pediatrician asked us if our baby always slept on a separate surface from us, I bit my lip and lied.

Deep down, however, I felt like the message from pediatricians was cold and robotic and this sleeping arrangement seemed completely natural.

As I navigated those early weeks of motherhood, listening to other new moms gabbing about their babies sleeping soundly on their backs in bassinets, I wondered what was wrong with our baby. I wondered what was wrong with us. My guilt was easier to handle than my fear of accusatory scares if I admitted to a practice that we understood to be inherently dangerous. Deep down, however, I felt like the message from pediatricians was cold and robotic and this sleeping arrangement seemed completely natural. I knew I wasn’t alone, but I didn’t know just how common bed-sharing was.

And as I began to research it, I was shocked to learn that for someone like me — a breastfeeding mom who doesn't smoke or take sedating medications, with a healthy full-term baby — bed-sharing can pose very little risk.

In a 2019 review of research, the Academy of Breastfeeding Medicine (ABM) came to the conclusion that while there are certainly unsafe ways to bed-share, there isn’t enough evidence to support the idea that bed-sharing among breastfeeding infants causes sudden infant death syndrome (SIDS) in the absence of known hazards. These include soft surfaces, secondhand smoke, overheating, and beds that butt up against walls. Another review of research done in the U.K. by the National Institute of Health and Care Excellence (NICE) also concluded that parents should not be advised not to avoid bed-sharing unless there are hazards.

“Humans are wired to sleep with their babies, that’s how we are designed. And so to tell people, ‘You can't do that,’ just goes against human nature,” says Dr. Melissa Bartick, M.D.

Bartick, assistant professor of medicine at Harvard Medical School, a breastfeeding researcher, and mother of three, tells me that while pediatricians constantly recite the potential risks of bed-sharing, the potential benefits are rarely mentioned. Principally, the fact that bed-sharing promotes breastfeeding and that babies who are breastfed are at lower risk for SIDS.

Bed-sharing’s bad reputation in the U.S. can largely be traced back to strict sleep guidelines put out by the American Academy of Pediatrics (AAP) starting in the 1990s. Although the AAP’s latest recommendations now acknowledge that “many parents choose to bed-share,” the authors of the updated safe sleep guidelines conclude the AAP “cannot support bed-sharing under any circumstances.”

For new moms like me, it is incredibly difficult to square the two pieces of advice — never bed-share, but also establish exclusive breastfeeding.

Dr. Rebecca Carlin, M.D., co-author of the AAP safe infant sleep guidelines, says the data they reviewed on bed-sharing showed a higher risk of SIDS as well as suffocation and entrapment in parental beds. One of the main reasons, Carlin says, has to do with the fact that adult mattresses tend to be softer. “And so if a baby gets into a position that is not recommended, if they roll onto their stomach for any reason, or if they get stuck in anything, the mattress isn't going to give them the support necessary to lift up their head,” Carlin says.

It’s of little surprise that 61% of U.S. mothers end up bed-sharing at least some of the time. “And we know that doctors themselves, including pediatricians, are bed-sharing,” Bartick says. “It's misleading to tell parents one thing if you are doing something else at home.”

AAP guidelines are intended to protect babies from horrific accidents, but, Bartick says, they have a chilling effect that cuts down conversation about bed-sharing. Pediatricians tend to adopt a “just don’t do it” approach instead of discussing the nuances of bed-sharing, says Dr. Lori Feldman-Winter, M.D., a pediatrician familiar with the AAP guidelines. They may fear legal and professional repercussions. After all, she pointed out, we live in a highly litigious society.

“Even though the recommendations actually say to have these non-judgemental conversations with families,” Feldman-Winter said, “I think pediatricians are afraid to think about anything that is outside of what the AAP says.”

Unfortunately, when doctors preach the equivalent of an abstinence-only message, new moms often wind up feeling guilty and even unintentionally sharing our beds with our newborns in unsafe ways.

“When parents come to me, they are very confused,” said Ariana Gonzalez, a pediatric sleep consultant and mother of two. She said many of her clients don’t plan to bed-share, but it’s how they maximize sleep. Others come from a culture where bed-sharing is the norm. “I'm Latina, and it's very common to bed-share,” she says. “My mom did it with us, my sisters did it with their children. But you tell the pediatrician and they shame you and then you don't bring it up ever again, right? And then you start lying to them.”

Gonzalez said bed-sharing makes it possible for new moms to spend more time breastfeeding, cuddling, and bonding with their babies. “Whenever I have consultations with moms with newborns, they're like, I just need to know how to do it safely. I can't find how to do it safely anywhere.” There are several evidence-based guides on safer bed-sharing, including from La Leche League and the Academy of Breastfeeding Medicine. Some new parents are bound to bed-share; it only makes sense to arm them with information about how to do so in the safest way possible. This type of “risk-minimization” approach has been effective in other countries, such as the U.K. and Australia.

In the U.S., pediatricians have a long way to go, says Feldman-Winter. “I think we have to start with having a conversation that's not stigmatizing that allows people to be trusting, and then negotiate what we think might be the safest sleep environment possible,” she tells me.

For me and my baby, that meant being flexible with our sleeping arrangement. At 3 months, I started to teach her how to sleep in the bassinet on her own. But sometimes, when I heard her rustle and whimper in the darkness, I would reach in to scoop her up and lift her into bed with me. As I curled around her, she would melt into the warmth of my belly and we would both tumble back into dreamland.

Editor’s note: This article has been update to reflect that Dr. Melissa Bartick has three children.