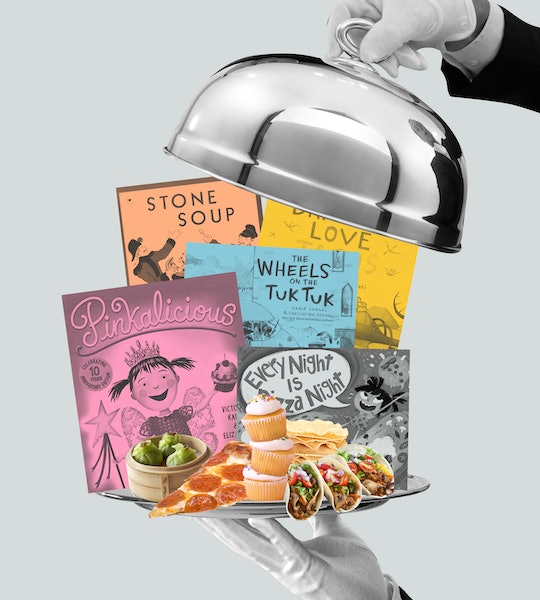 From Yuck To Yum, Kids Are Learning About Food In Almost Every Book We Read Them

Why this food writer skips certain lines in her kids’ favorite books.

When I found a copy of Ramona Quimby, Age 8, in a Little Free Library, I couldn’t wait to bring it home to my daughters. Watching them fall in love with the same precocious Portland kid that I had so many years before rekindled my own feelings of finding a kindred spirit in Ramona, a fellow little sister with a big mouth navigating a confusing and unfair world. They begged for another chapter of Ramona each night in a way that made my book-loving heart swell with pride. But on the fourth night, my starry-eyed vision abruptly cleared. “Beezus pushed aside her gravy with the side of her fork,” I read, stopping before the next sentence. “Gravy was fattening.”

As a voracious reader with wildly passionate memories about the books I loved as a kid, reading them to my own children has often changed my opinion: it turns out Eloise is a snobby little brat, and was The Cat in the Hat always so long? But in Ramona, I was shocked to find the line I am unwilling to cross: negative food talk. "I don't like tongue," Beezus continued, but I did not, frantically flipping pages before the girls noticed. "Yuck!" Ramona echoed. I scrambled to the next scene.

My kids — like most 3- and 5-year-olds — are sometimes picky eaters. It comes and goes, a natural stage I remember learning about in a college class on early childhood development, perhaps an evolutionary instinct that kicks in around the same time they become mobile and keeps them from eating all the poisonous berries when they toddle off. Pickiness also tends to be genetic; I’m assuming my kids got that from their father.

But the language they use to express their food preferences is learned, and what they learn affects how they act around unfamiliar foods. A fellow food writer talks a lot on social media about his daughter, who is around the same age as my girls, and her willingness to eat everything. So I was surprised to open his children’s book and have to skip an entire page full of lines like "Peking duck? Peking yuck!" "Five bean chili? Don't be silly!" and the place I first drew the line, "French onion soup? French onion p—"

"Poop!" squealed my daughter, both the first time I read it and, less enthusiastically, a few nights later at the dinner table. Even though the overall message of the book — which I love, despite this, just as I still love Ramona — is about trying new foods, I watched the language in the book immediately enter my children's tiny culinary lexicon. The moral of the book comes across too subtly to chase the fun new words they could bring to the table from their wee preschooler brains. Dinner looks like what comes out my butt! It’s hilarious!

Thanks to great books, my kids want to make stone soup, taste the tacos that dragons love so much, and try the “poppa-doppa-doms” that the riders eat as the tuk tuk wheels go round.

As much of a battle as it can be to get toddlers to try new foods, an easy way to find yourself fighting that battle while running uphill in a snowstorm is to have their sibling describe it with bathroom words. I don’t expect my kids to eat everything I serve — which is good, because they don’t — though I encourage them to try everything, which they sometimes do. But when they insult the food before even tasting it or give bombastic declarations as they dramatically spit it out, l can almost always trace it back to a source: something a classmate said, a line from a movie, words from a book.

The book-to-table pipeline shows up at least as obviously in the other direction, though, giving them the words to get excited about food. Reading them Yum, Yum, Dim Sum hundreds of times before they even learned to crawl didn’t prevent the inevitable meals where one kid rejected the dumpling skin and the other the filling (at least we wasted fewer dumplings that way). But they were excited enough at the idea of dim sum from hearing me say, “Why, oh why, my little sui mai, do I love you so?” that they happily tried it and soon warmed up. In the meantime, they cooed cutely at it, rather than breaking my cardinal rule by yucking someone else’s yum.

Thanks to great books, my kids want to make stone soup, taste the tacos that dragons love so much, and try the “poppa-doppa-doms” that the riders eat as the tuk tuk wheels go round. Any kid who grew up reading C.S. Lewis’s Narnia series understands the draw of reading about a character’s most beloved food (even if many were eventually disappointed when they tasted Turkish delight).

But my girls still want every night to be pizza night, as well as to try the bibimbap and tagine Pipo explores, and to hear about Ramona’s adventures. So I simply skip over the lines, pages, or parts that yuck my yum or introduce fat-shaming or diet talk. Most of the time, the story flows just as well. When Pinkalicious turns pink from eating too many cupcakes and needs green foods to return to her normal color, gorging herself on relish hits just the same without the word “icky.” Saying she swallows the artichokes, gulps grapes, and bites into brussels sprouts works just as well as when she chokes them down, gags on them, or burps them up.

I am confident that my kids will learn the same words, feelings, and connotations at some point — from books they read themselves, from friends, from television. I just see no reason to give them a head start. So I skip a few pages, and pick back up in the kitchen with Ramona as her parents force her and Beezus to learn to make dinner for the family, a task on which I would very much like to give my children a head start.

This article was originally published on June 9, 2021