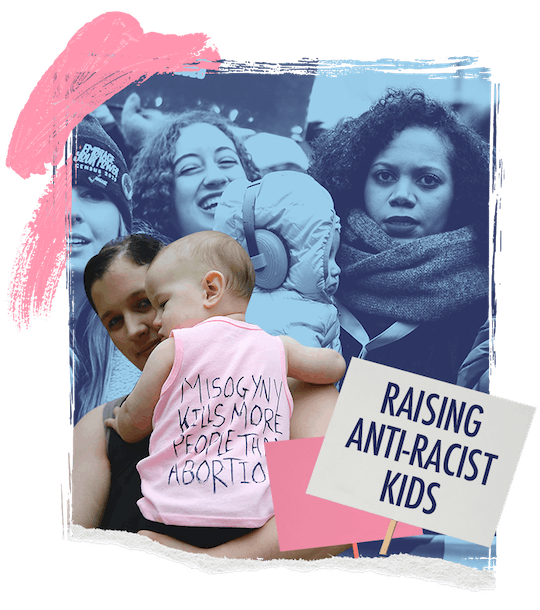 Abortion is a family issue.

My daughter was 5 months old when she came with me to D.C. for the 2020 Women’s March, pre-pandemic. I was helping plan the march and she was still breastfeeding. I got on the train with my friend and Women’s March colleague, Kim, and together we brought her to D.C. We set a blanket down in the middle of the table in the room where we worked and she lay there, right in the midst of our conversations about abortion access, racial justice, and more. From the time she was a wee thing, my husband and I knew one thing was clear: children of all ages belong at marches for justice. That’s why, on Saturday, May 14, when hundreds of thousands of people will be marching in the Bans Off Our Bodies protests in over 300 locations across the country, my daughter (now 2 1/2 years old) and my 7-year-old son will be among them, marching for abortion justice.

Why? Glad you asked. Read on for my reasons and some tips for bringing your little kids to marches.

You may be wondering why I’m writing about abortion within a column about anti-racist parenting. Here’s the thing: Abortion justice is racial justice. Striking down Roe will impact birthing people of color the most. As Ushma Upadhyay, a public health social scientist at the University of California, San Francisco, told NPR, “The states that are most likely to ban abortion have much higher, much greater proportions of people of color.”

It’s also worthy to note that Black, American Indian, and Alaska Native (AI/AN) women are two to three times more likely to die from pregnancy-related causes than white women are. This means that, if Roe is overturned, women of color will be forced to give birth without the proper supports needed to keep us alive. So as you think about infusing anti-racism into the core tenets of your home, include the fight for abortion. It affects those of us who belong to communities that have historically been marginalized more than ever.

Abortion affects everyone, no matter their gender.

Last week, a leak revealed that the Supreme Court is likely to overturn Roe v. Wade, the landmark ruling that gives the people of this country the legal right to have abortions. This ruling will be devastating. More than 80% of Americans actually support keeping abortion legal. That’s because abortion affects everyone, not only women. Of course, trans men and non-binary people can also get abortions. But no matter who is accessing this health care choice, it’s an option that also affects their children, their partners, and their family members. It can be a lifesaving procedure that helps people continue to live the lives they want to.

Taking your little kids to marches for abortion justice shows them that abortion isn’t “just” a women’s issue. It’s a global issue. It’s a human rights issue. It’s a family issue. Being among a crowd of people chanting and speaking out in support of abortion is powerful for your kid to witness. Teaching them from a young age that abortions can impact their lives, no matter who they are, is a lesson all kids need.

Advocating for the right to do what we want with our bodies carries with it a universal message of bodily autonomy and consent — something children should learn about young.

My daughter is a toddler but she understands consent. She understands the power of the word “no” in relation to decisions about her body. The importance of consent and respect for other people’s decisions about their lives is a fundamental lesson that all parents and caregivers need to include in their parenting toolbox.

Tabitha carries her daughter at the D.C. Women’s March in 2020.Kisha Bari
“Teaching them from a young age that abortions can impact their lives, no matter who they are, is a lesson all kids need.”Tabitha St. Bernard-Jacobs
1/2

Kids need to learn early on that every person must have the final say on what happens to their bodies and that must be respected. It starts on the playground and leads all the way into the government. Kids who learn about bodily autonomy and consent may be less likely to grow up to be lawmakers who want to govern a person’s right to choose if and when to have a family.

We need to destigmatize abortion.

Abortion. It’s a word that should be used in the home. Us parents and caregivers need to destigmatize abortion in our homes and in our communities, starting with our little kids. You can talk to your kids about people’s right to bodily autonomy and connect it to consent. You can talk about the fact that abortions are medical procedures that allow people to make choices about their bodies, allowing them to live the life they want. It gives people options and saves the lives of many pregnant people. Abortion shouldn’t be a bad word in your house and taking your little one to a march for abortion justice is a great step in showing them how many other people support abortion and are unafraid to show it.

In preparation for the march, you may want to talk to your kids about abortion and reproductive rights. There are age-appropriate ways to ensure that your kid gets the support they need in this conversation, including books like What's An Abortion, Anyway? by Carly Manes and illustrated by Mar, two full-spectrum doulas. As described on their website, the book is “a medically accurate, non-judgmental, and gender-inclusive resource for young folks about abortion care.”

One powerful result of destigmatizing abortions in your home is that, if your kid is ever in need of one, they will know that your home is a place where they can come to for support with this.

So take your little kids to a Bans Off Our Bodies march this Saturday and in the future, because we need every voice in this fight.

Here are some of my top tips for taking children to marches:

Us parents and caregivers have an immense responsibility to raise kids who are anti-racist changemakers and who are willing and ready to fight for the rights of all. And it starts from a young age.

More Like This
Advice For Rihanna On Having A Baby In This Country, From One Black Mom To Another
Explaining My Terrible Tattoo To My Kids Reminds Me Of What I Owe My Mom
The New Season Of 'Russian Doll' Tries To Escape Its Mommy Issues On The 6 Train
Adult Gymnastics Brought Me Back To Myself