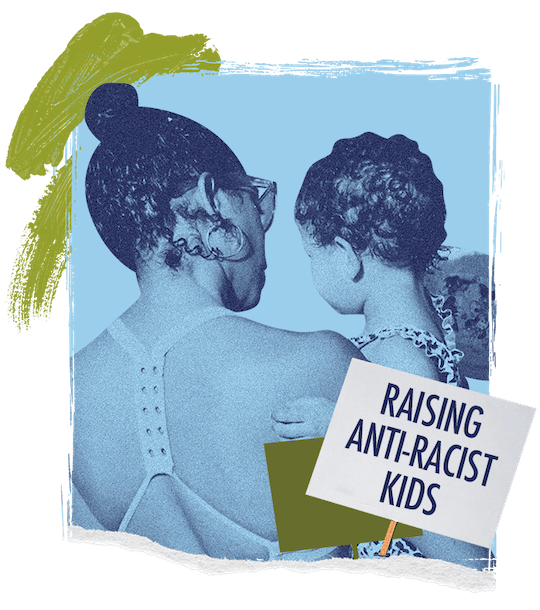 If we don’t do the work, society will jump right in and fill the gaps with damaging messages.

My son was just a chubby little baby with a headful of brown curls and big blue eyes when the unsolicited comments about his racial identity started. As often happens, it began in subtle but deeply harmful ways, like the assumption that because his skin is lighter than his Black immigrant mother’s, that I must be the nanny. My son was 2 years old before he first developed the language to begin to talk about his racial identity, but we were already late to the game at that point. Now that he’s 7, the conversations go a little deeper and his introspections are developing more nuance and clarity. His little sister, on the other hand, is just a toddler and though her skin is darker than her brother’s, we’ve learned a thing or two from the mistakes we made with our son when it comes to lessons on identity.

My partner and I have realized that raising two Black multiracial children who are light-skinned, with a combination of Indian, Black, Trinidadian, and white Ashkenazi Jewish heritage, takes an extra dose of intention, hard work, and purpose — with no shortage of surprises along the way. It’s messy and we sometimes get it wrong. We’ve learned, though, that if we don’t do the work, society will jump right in and fill in the gaps for them with damaging messages about who they are. So here are some lessons I’ve learned that I’m sharing for parents of Black multiracial children.

1. Teach your kids to approach their Black multiracial identity with an expansive approach, not a reductive one. Teach them to be proud of every part of their heritage.

Each ethnic culture that makes your child who they are adds to their rich heritage. One does not have to stand at the sacrifice of the other. When they celebrate and own one part of who they are, it doesn’t mean that they’re not equally proud and joyful about the other parts. But if your kids are mixed with white, it’s important to be mindful of how white dominance plays a role in your parenting. Because we live in a country built on white supremacy, without intention, whiteness is framed as the normative culture and it can sneak up on you in insidious ways. Be mindful of which culture is getting extra love and be critical and honest with yourself as to why.

Luckily for my kids, I carry with me 40 years of exuberant pride and love for my Trinidadian heritage, and that pride is thoroughly infused in all aspects of our home. Our home is filled with soca music and my children have been eating doubles and roti since they were wee little babies. We also teach them about being African American, which is a culture that is new to both my partner (a white man) and me (an immigrant). It’s a constant learning process melding the different parts of who our kids are with a fluidity that centers justice and equity.

2. Finding their place might mean finding a home in different communities.

As a multiracial person, I know all too well the experience of not quite belonging fully to any one racial group. As a family, we prioritize building meaningful relationships within all the communities we belong to. That looks like going to temple for Divali with my Indian aunt, celebrating Passover with my partner’s family, and bringing Christmas into our homes with a Christmas party (pre-Covid, that is).

Your No. 1 priority when building community for your kids? Make it fun and kid-friendly! That’s a surefire way to ensure your kids delve into positive experiences and build lasting memories with each community they belong to.

3. Recognize that they exist with marginalizations and privileges.

Being multiracial can be confusing for little kids especially because they may experience marginalizations in some spaces and privileges in others. Because of the ugly stain of colorism, others may at times treat my light-skinned Black children as not Black enough. But those same children also face racist people who discriminate against them because of their Blackness. Colorism is a child of white supremacy, attempting to force upon us an ideology that defines whiteness as the supreme existence, therefore the closer one is to whiteness, the more benefits one stands to receive. This erroneous ideology harms everyone, even those with light skin. It positions my kids as tools in a system that is meant to benefit whiteness.

Teaching my kids about this means guiding them to foster a strong sense of their identity, understanding the impact of white supremacy on all of us, and actively rejecting being a casual ally, choosing instead the path of co-conspiratorship. It means loudly rejecting benefits handed to them because of their light skin and dismantling systems that seek to privilege them over darker skin people. Teach your kids to bring their whole selves into every room they enter and reject racism and white supremacy loudly.

4. “Each member of our family may look different and that’s OK.”

If your kids are Black multiracial kids, chances are your family members look different from each other. Some have darker skin tones than others. Some have different hair textures. We teach our kids that “that’s OK because we all belong together, with each other.” The Madrigal family in the hit movie Encanto is an example of this (what a joy to have an example in the media to point them to!). Your kids might see certain definitions of families around them, where everyone has the same skin tone and hair texture. Teach them that family is defined by the love you have for each other and the unit you have created together, not by other people’s ideas of what a family is.

5. Your kids are beautiful because they are.

Because they are kind and sweet and loving. Because they exist. Because they are human. The world we’re fighting for is one in which everyone is treated with equity and love and compassion and fairness no matter their skin tone, not because of it. Race is an important part of one’s identity and so is kindness and vulnerability and gentleness and love. Teach your kids that these values are crucially important to building a world where each child is emboldened to be changemakers in every area of their lives, no matter who they are.

The act of raising Black multiracial kids in today's America is an ongoing and ever-changing lesson in being grounded in who they are. The specifics will look different depending on the age of your kids, but as long as you stick with it, they’re more likely to get their lessons on identity from your family unit than from a society that seeks to judge them based on their skin color and race. Our communities are becoming increasingly more representative of the many racial backgrounds that exist. It’s the world we are building and it’s the world your kids will inherit. Prepare them adequately and their strength and purpose will shine throughout their lives.