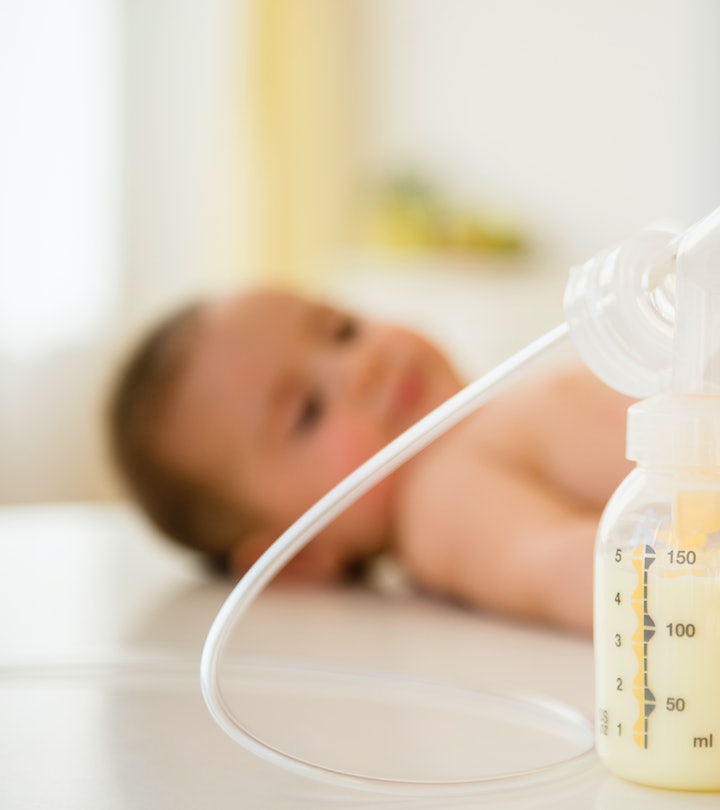 Your Guide To Relactation: What It Is & How To Do It

Yes, you can probably get your milk flowing again.

You may remember during the formula shortage of 2022, there were a lot of misinformed people saying women should “just breastfeed” or relactate. To be clear, relactation is not always a feasible option and even when it is, it takes dedication, a lot of time, and a lot of work. Plus, no one should feel forced into relactation for any reason. However, there are many circumstances — including adoption, simply changing your mind, or donating milk to a friend with low supply — where relactation may make sense for you. Here, with the help of two lactation consultants, we break down everything you need to know about relactation — what it is, and how to give it a try.

Relactation is when a person trains their body to begin producing milk again after a period away from breastfeeding or pumping. The Centers For Disease Control (CDC) defines relactation as “ the process by which a parent reestablishes lactation after having stopped for some time (weeks or months).”

Basically it’s any time a non-pregnant person resumes breastfeeding (it’s not considered relactation if you’ve started producing milk again because you are pregnant or have just given birth).

There are plenty of reasons a person may want to relactate. A parent may have weaned and then realized they or their baby were not ready to stop. “Other times a parent may wean for a period of time for medical reasons (example, chemotherapy) and decide to resume breastfeeding later. Some people decide to relactate because they are adopting a child (after previously given birth) and they want to breastfeed that child, or they want to re-establish their milk supply to breastfeed or donate milk to a family member or friend's child,” Chrisie Rosenthal, an International Board-Certified Lactation Consultant (IBCLC) with The Lactation Network, tells Romper. Also, in times of emergencies and natural disasters, some may look to relactation out of necessity, Rosenthal adds.

How to start relactation

Relactation plans vary a bit depending on each individual person and situation. “If you plan to relactate, work with an IBCLC who is experienced in relactation,” Rosenthal says, adding that consultations with an IBCLC may be covered under your medical insurance.

If you’re hoping to start relactation, you’re going to need to pull you breast pump out of whatever closet you shoved it in. “Generally speaking, every relactation plan will include pumping on a regular basis,” Rosenthal says. “Regular pumping tells your body to start producing breast milk again. The pump you use can make a big difference, as well. Consider renting a high-quality double electric pump.” Treat pumping as you would breastfeeding: Make sure you have plenty of water and snacks around, and settle into a comfortable position with a book or something to do.

How long does it take to relactate?

How long it takes to relactate is also something that will vary a lot person-to-person. “The length of time it takes a person to relactate can depend on how long it’s been since they’ve breastfed last and how often and effectively they are removing milk from their breasts,” Krystal Nicole Duhaney, registered nurse, IBCLC, and founder of Milky Mama tells Romper. A good rule of thumb, though, is that it often takes about the same amount of time to get your milk flowing again as it has been since you’ve last breastfed.

Other factors in how long it takes to relactate include how strong your breast milk supply was to begin with and how many times you’ve lactated in the past, Rosenthal says. “Most people who are relactating will start to see results in as little as a few days, to a few weeks — but for some it may take months.”

The key to producing more breast milk, Duhaney says, is to think of it as a supply and demand relationship. The more you create demand by pumping, the more milk you’ll produce. “The best thing you can do to start is remove milk from your breasts frequently and effectively. Aim to remove milk from your breasts around every 2-3 hours,” she says. If you have a baby and you’re relactating, try to get them to latch and encourage them to do so as often as possible.

Make sure your pump is working for you by ensuring the flanges are the correct size and that your pump and its parts are in good condition so that it can remove milk from your breasts efficiently, Duhaney says. If it’s been awhile since you breastfed or your pump wasn’t stored well, it may be time to look into getting a new one.

“Additionally, massage your breasts with your hands while pumping and nursing to remove as much milk as possible. The more milk you remove, the more signals you’re sending to your body to make milk, which can help make the relactation process a success,” Duhaney says.

Can you relactate after one year?

You may be wondering if relactation actually works, especially if you’ve been trying to no avail. “There's no point in time where it's no longer possible,” Rosenthal says. “Time is a factor, though. Generally speaking, how recently you last lactated will be a factor in how long it takes to re-establish a milk supply. Relactation plans take dedication, and results vary.”

While relactation takes a lot of time and dedication, it is possible after a short break or even a long time away from breastfeeding. “A fun fact is that there have been instances where grandmothers have been able to relactate to feed their grandchildren. In fact, it’s reported to be a common practice in many cultures,” Rosenthal adds.

What are the signs that relactation is working?

The most obvious sign that relactation is working is when you start seeing breast milk either come out of your nipples or collect in the bottle. Other signs include breast fullness or leaking. “It's very exciting to see your hard work start to pay off! Keep in mind, any milk production is considered successful relactation,” Rosenthal says. “Set realistic expectations, and be open to discovering how much milk you'll be able to produce through this process. There's no guarantee that you'll be able to re-establish a full supply, however working with an IBCLC maximizes your chances of meeting your goal.”

When it comes to trying to relactate, practice makes perfect. In the beginning of your relactation journey, you will likely find that you are pumping but not producing anything — this is an expected step in the process and it doesn’t mean that relactation isn’t working. This can be frustrating, but in many cases if you keep at it, you will see your breast milk supply return in some capacity.

More Like This
When Does A Baby Recognize Their Father? A Pediatrician Explains
Parents Have Thoughts After Court Orders Nursing Mom To Use Bottle In Custody Dispute
Chrissy Teigen Nodding Off While Breastfeeding As Miles Chats Away Is Too Relatable
A Parent’s Guide To Stomach Pain In Kids
What Parents Are Talking About — Delivered Straight To Your Inbox