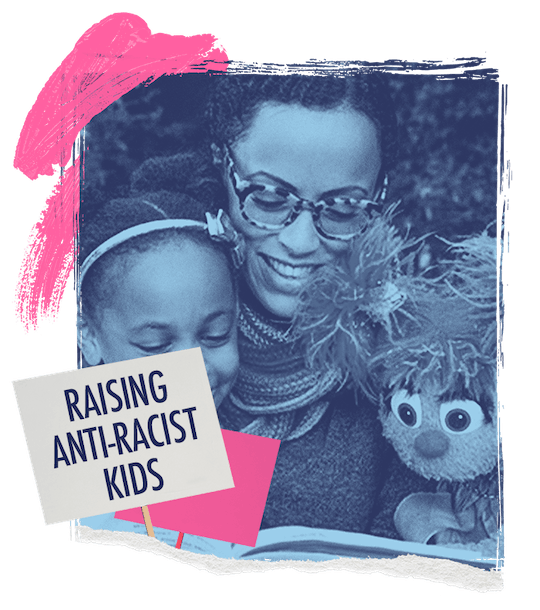 “Elmo wants to know why Wes’ skin is brown.”

Many well-meaning parents are struggling right now with how to address race and racism with their kids — which means they often inadvertently sidestep these conversations because they just don’t know what to say or where to start. That’s why I’ve been so delighted as a mom to see Sesame Street lean into its role as a leader in children’s programming by delving directly into these issues and providing actionable tips for parents who want to raise anti-racist kids. Sesame Street has long been a vanguard in progressive children’s entertainment, and today the programming remains reflective and intentional while addressing head-on the challenges our kids face daily. Most importantly (and helpful for parents!) is that their work continues to exemplify what it means to not sugarcoat race conversations, no matter how young our kids may be.

I’m Trinidadian and dare I say most Trinis born in my generation are obsessed with Sesame Street because it was one of the few kids’ shows we had access to back in the day. We were lucky — and now my American-born kids are, too. It should go without saying that media providers have a responsibility to create programming that sets the stage for a new generation of kids of color to go into the world expecting to see themselves reflected in mainstream spaces. It’s also vital for white kids to learn what it means to spend one’s privilege and to use it to combat racism, even as kids. Sesame Street gives parents of every background the tools they need to have tough conversations with their kids about race and identity, and also to approach these topics in a way that’s kid-appropriate and fun.

A few months ago, Sesame Workshop (the nonprofit educational organization behind the beloved show) introduced online videos with two new Black characters, 5-year-old Wes and his father, Elijah, as part of their ongoing racial justice initiative, Coming Together. And more recently, I was so thrilled to see them introduce another video about identity, featuring First Lady Dr. Jill Biden and Rosita, a Mexican-American character on Sesame Street.

Rocio Galarza, Sesame Workshop’s vice president of U.S. social impact, told me it was clear even before the pandemic that racism was a topic they needed to be more explicit about. “We had a role to play particularly from a historical trauma perspective,” she says. “Last summer happened and we decided we really needed to move forward with this, while keeping our process in place.”

There’s no shushing, no repercussion for asking what some parents might wrongly frame as an inappropriate question; there is no use of metaphors.

The result is an ever-expanding set of resources that not only helps parents with where to start, but gives them the tools needed in the work of raising children who are ready to identify and fight racism. From videos for kids to watch to books to read together, the resources are age-appropriate and fun, while doing kids the service of not underestimating their intelligence.

Here are six things every parent can learn from what Sesame Street is doing right in their approach to talking to kids about race:

In this video, Elmo, one of the most widely loved figures of children’s television, asks his friend, Wes, a question: “Elmo wants to know why Wes’ skin is brown.”

In response, Wes and his dad, Elijah, simply teach Elmo about melanin. There’s no shushing, no repercussion for asking what some parents might wrongly frame as an inappropriate question; there is no use of metaphors. Not only is this a learning point for kids watching, it’s a learning point for parents on explaining race to kids in an age-appropriate, unvarnished way that meets their development. This forthrightness and lack of judgment opens up a space where kids know it’s OK to ask questions.

“At Sesame Workshop, we look at every issue through the lens of a child. Children are not colorblind — not only do they first notice differences in race in infancy, but they also start forming their own sense of identity at a very young age,” said Dr. Jeanette Betancourt, Ed.D., senior vice president, Sesame Workshop, in a statement when the videos launched in March. It’s OK to go back to the basics with kids who are thinking about these things — in fact, it’s necessary to set the framework for ongoing conversations about racism.

When Rosita talks about “being proud to be an upstander,” in this video, she explains, “That means that I use kind words and actions to stand up for myself and my friends.” Kids need simple, uncomplicated language that’s easy to grasp.

I particularly love books that do a good job of this, like Always Anjali, where Anjali experiences bullying because of her name. Author Sheetal Sheth shows not only Anjali’s struggle but how she gains the strength, after chatting with her parents, to stand up for herself and demand respect for her name.

When parents provide support and clear guidance, it can do wonders for emboldening kids to translate it into their lives. Using shorter sentences and simple words and pausing to check in often to make sure kids understand are just a few tools to help parents along.

3. Proactively create a relationship with your kids where difficult conversations are encouraged.

These conversations with kids must stem from an affirming, grounded relationship between parent and child where difficult conversations are not only “OK,” they’re encouraged. Rocio told me that her team’s creative choices around Wes and Elijah were focused on what Sesame Workshop ultimately wanted to address and achieve — and that started with a key building block: a wonderful father-and-son relationship.

As parents, the trust between you and your child is the framework for being able to tackle difficulties together. Parents can do this by meeting kids’ questions with kind, simple answers and letting them know you’re here to help them work through all the confusing things in life.

Wes’ dad models this really well. Right off the bat, the stage is set by him spending time with his son one-on-one in the park. Carving out time for kids makes space for them to know that you are there to listen, away from the hustle and bustle of everyday life. In their conversation, Wes’ dad asks, “What do you see?” Simple questions like this are powerful: they tell your child that you value their perspective, setting the stage for them to feel empowered to share what’s really on their minds.

4. Never assume your kid is too young for these topics.

“Sesame Street really wanted for the kids to feel like they can ask questions about race and skin color,” Rocio told me, suggesting that the best use of the show and Sesame Workshop’s online resources is creating the space so children can ask questions.

What do families look like when some people are lighter than others? How do we represent the father and the son in a way that can really connect with the people they represent on the screen?

“Sesame Street is watched by kids as young as babies so it’s a great entry point for parents who want to start as early as possible with having these conversations,” she added. Indeed, if you’ve been reading this column, you probably have seen this fact over and over: Studies show that kids start noticing race as early as 3 months old. As they grow, kids will continue to have thoughts and questions about race. By introducing conversations about race on one of the most loved kids' shows in history, Sesame Street opens the door to providing kids with the language to ask about race and to learn about it in a way that is a part of their lives early on. This is an invaluable lesson for parents.

5. Be intentional about talking about the diversity that exists within families.

Rocio told me her team at Sesame Workshop was intentional about every little part of crafting the characters. They wanted to represent the fact that, even within families where people look alike, there are differences, and those differences should be celebrated. Even though the eyelids for Elijah and Wes are the same color, Elijah is a little darker than Wes. Rocio’s team asked critical questions like, “What do families look like when some people are lighter than others? How do we represent the father and the son in a way that can really connect with the people they represent on the screen?”

This level of intention is also needed when parents talk to their kids. Parents can point out these differences to their kids and talk about the fact that, even when we have things in common with others, it’s important for us to celebrate the ways in which we are unique and different.

After being teased by another kid about her eyes, Analyn is sad and talks about it with Alan and Wes. Alan tells Analyn, “That child was wrong to say those things to you. Your eyes are the perfect eyes for you.” Not only does this send a strong message to Asian kids who are watching about their own identity, it teaches kids of other backgrounds how to respond to their friends who have been hurt by anti-Asian hate.

In June, Sesame Street introduced a character with two dads. Later that month, on another segment, they released a song encouraging Asian kids to love their eyes. Kids need to see a world that reflects people of diverse backgrounds, races, and ethnicities. When they see these realities on television, it helps normalize the fact that the world is rich in diversity — and that embracing what makes people unique and special is a necessary and beautiful lesson to learn.

Sesame Workshop has a host of resources for having these convos, and many others, with kids. Carve an hour out of your weekend to explore them with your kids.