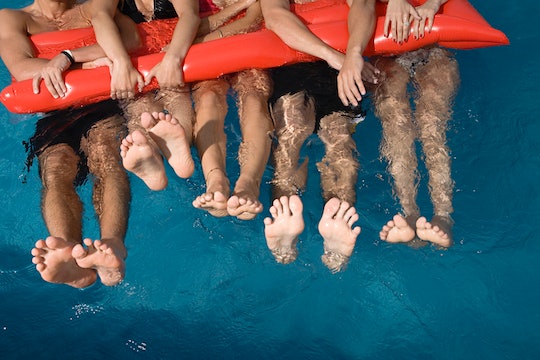 Why I'm Talking To My Teenage Son About Abortion — And Vasectomies

Our sons need to be part of the conversation.

I was sitting with my 14-year-old son after breakfast Tuesday morning and we were just about to get up from the table. Mid-laugh, I reached for my buzzing phone only to be greeted with news so deeply unsettling that it halted that laugh in its tracks: A draft opinion from the Supreme Court of the United States had been leaked, an opinion that would overturn abortion rights protected by Roe v. Wade. People with uteri may once again be stripped of their bodily autonomy. No one is safe.

That means my son isn’t safe either.

My cisgender male child (although he recently decided that being referred to as they/them is fine, too) isn’t exempt from the potential repercussions of criminalizing abortions. As a heterosexual male who likes girls, sooner than later he is going to have sex with someone who has a uterus. He shouldn’t be forced to become a father against his will because of it.

When we talk about reproductive rights we always center people with uteri, which is absolutely the right thing to do. Laws that would criminalize abortion would overwhelmingly affect those who can get pregnant, and who can in turn be forced to carry that pregnancy to full term. What we don’t talk about enough is how this can and does affect cisgender males. What seems to be missing from the conversation at large are the individual conversations that need to be had with our sons. What kinds of dialogue do we encourage our sons to have with us about this topic? What kinds of discussions do we encourage our sons to have with each other about reproductive rights? It seems to me that at a time like this, we need all hands on deck. We need each and every advocate for bodily autonomy and reproductive rights to be informed, engaged, and ready to take action in any way they can.

As a cisgender woman with a uterus of my own, I’ve been advocating for women’s bodily autonomy for decades. My first march on Washington for reproductive rights was with a group of activists in high school, coordinated with the National Organization for Women. I was 17 years old. I’ll be 49 in two weeks. It’s been a long, long fight — one that I am not inclined to give up on any time soon. Hearing about the leaked draft opinion made me think of one of the ways I could potentially protect both my son and any of his future partners from forced parenthood: I decided to talk to my son about having a vasectomy.

First, I talked with him about that day’s news, about how the draft opinion had been leaked, about what overturning Roe v. Wade would mean for all people, not just people who could get pregnant. It means enduring pregnancy and birth you did not choose. And, most often, it means being forced into parenthood.

I would rather have this conversation than one with a scared 14-year-old girl forced to carry a pregnancy she isn’t ready for.

Then, I told him what a vasectomy was, that it was usually reversible, and that if more young people got them, there would be less of a need for abortions to begin with. I reminded him that what is important right now is that we continue to fight for sovereignty over our own bodies and against government reproductive rule. I made sure that he understood that if he were to eventually get a vasectomy, it wouldn’t exempt him from standing up for what’s right — bodily autonomy — especially when so many others won’t have access to the resources needed to take similar precautions. I told him that without the legal right to safe abortions, people who have been sexually assaulted and impregnated will be forced to carry the children to full term. Neither they, nor anyone else who chooses pregnancy termination for any reason whatsoever, should be left to fight on their own.

But I also needed him to know that there is a way that he can not only potentially keep himself from forced parenthood, but keep his partners from the same fate. I told him that while vasectomies can fail in very small percentages, they are a highly successful procedure that is usually reversible. I was sure he’d need some serious convincing because of the sensitive area that would be the location of the procedure, and I was prepared to engage my best debate team muscles, but he did what he always does — he surprised me.

I laughed but he shook his head.

“What makes sense about it?”

“I mean, if I could do something legal that would keep me from a bigger mess down the road, why wouldn’t I do that? Who wants to be forced to be a parent, or have to watch their girlfriend get an illegal abortion that could kill her? No, thanks. A vasectomy doesn’t sound that bad.”

If there are enough vasectomies out there, there will be considerably fewer unwanted pregnancies. It’s not a blanket overall solution but it would help. Even just having conversations like these helps. There’s so much that isn’t talked about when it comes to reproductive rights, even in this day and age. My son and his friends never talk about abortions. Ever. Most girls his age would rather die than talk to a boy his age about abortions.

Speaking with my son I realized that the conversations being had around reproductive rights aren’t usually the same conversations anyone is having with male cisgender children. As parents, if we’re proactive, we talk about condoms and STDs, but we often talk about abortions in terms of rights we currently take for granted — rights that could soon be taken from us. It seems to me that conversations around reproductive justice are essential to have with all of our children, no matter their gender.

It’s easy to fall into a pit of despair at the state of things, but we can’t afford to not take action. Regardless of what happens with the leaked draft opinion, empowering my son to make informed decisions about his body, his health, and his reproductive future will keep me buoyed so that I don’t drown in waves of despair if bad news comes. I need to be as steady as I can as we continue fighting for reproductive rights with our ballots, our donations, and our voices.

More Like This
Yes, Your Young Children Belong At Abortion Rallies
Social Media’s Effect On Kids’ Wellbeing Is A Public Health Emergency
Explaining My Terrible Tattoo To My Kids Reminds Me Of What I Owe My Mom
The New Season Of 'Russian Doll' Tries To Escape Its Mommy Issues On The 6 Train