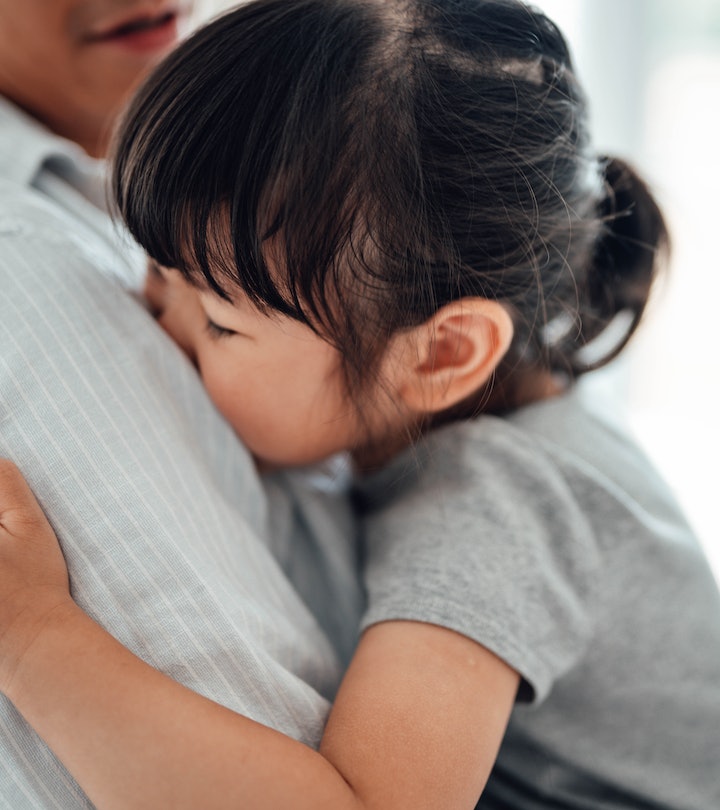 Why Is My Toddler Throwing Up With No Other Symptoms? Experts Explain

When to call the doctor, and when it's likely to pass on its own.

When kids are sick in books or movies, they take to their (beautifully made up) beds and get rest. Actual kids, well, they tend to do something else. Mostly, they keep bouncing off the walls. When adults throw up, we tend to take that as a sign that something is really wrong and cancel plans, or at least take it easy for a bit. But toddlers can throw up and then continue on about their business, unperturbed. You’ve checked their temperature, and there’s no fever. So, what do you do, as a parent, when your toddler is vomiting with no other symptoms? How do you know whether it’s something you need to call the doctor about, or just a weird fluke that’s likely to pass?

Mainly, you’ll have to use your powers of observation. Even a seriously ill toddler might be more likely to tell you about the red truck he saw once than actually explain his symptoms. Figuring out if they’re too sick for school or daycare can be its own puzzle since, again, they’re not likely to tell you. To add to your list of worries, vomiting and gastrointestinal issues can be a symptom of Omicron in kids. Luckily, there’s some guidance. The medical professionals who work with kids have seen it all, and know when throwing up is an inconvenience, and when it’s something to take more seriously.

Why is my toddler vomiting with no other symptoms?

If your toddler is throwing up, but doesn’t have a fever or seem to have anything else wrong with them, there are a few things that could be going on, according to Dr. Steven Abelowitz, a pediatrician and director of Coastal Kids Pediatrics. The four main issues that doctors would point to in this case are:

Beyond these four big causes, the list of things that could cause your toddler to vomit runs the gamut from appendicitis to motion sickness. Kids can vomit after hard coughing, after taking medications on an empty stomach, and after a serious head trauma. You might have to mentally look back through the day to figure out the most likely explanation. If you’re worried at all, a quick call to your pediatrician’s office can put your mind at ease.

Dehydration: When to worry

Dehydration is always a potential concern when you have a vomiting toddler on your hands, and knowing the signs can help you feel prepared. The most common signs of dehydration in a young child, according to Abelowitz, are:

A seriously dehydrated child may also become too weak to stand and lethargic.

Preventing dehydration isn’t always as easy as you might think, especially if your kid is throwing up frequently and can’t keep water down. Parents should wait twenty minutes after an episode of vomiting, Zindler says. Then, use a dropper to offer Pedialyte or Gatorade every fifteen minutes. If you try that twice, and your kid still can’t keep anything down, you should call your health care provider. If they keep that down, you can keep rehydrating them by offering an ounce of liquid every ten minutes. This method may avoid getting into a cycle where you can’t get them to keep anything down. “It’s common to continue to vomit once the belly is stressed from vomiting,” Zindler points out.

It’s always OK to check in with your pediatrician if you’re worried, Abelowitz reminds, but you should absolutely phone your doctor right away if:

If your kid’s symptoms aren’t on this list, you can breathe a sigh of relief. But, even without other symptoms like a fever, you should keep a close eye on your kid if they’re throwing up. “Vomiting — although quite common in children — always needs to be taken very seriously,” Abelowitz notes. “Parents should be supervising children that are vomiting very closely.”

Hopefully, in a few hours, your kid will be feeling like themselves again and you’ll be able to collect a parenting merit badge for “unexplained vomit.”