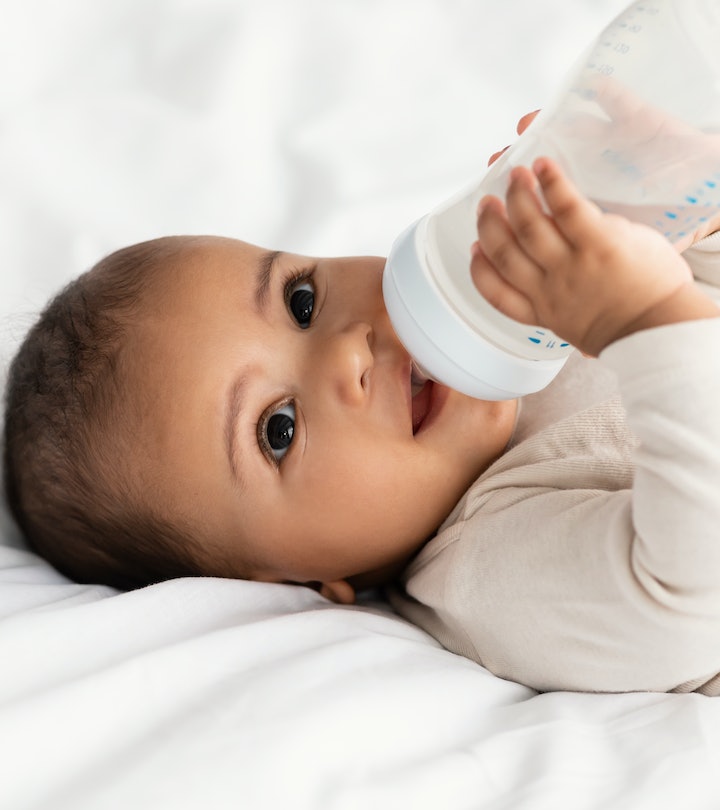 Here's How To Successfully Wean Baby Off The Bottle

When babies are bottle-fed, they become really dependent on and attached to their bottle. It’s the thing that’s brought them food and comfort for at least a year, and they are not about to just give that up. So when it comes time to wean baby off the bottle, many parents find that the transition isn’t quite as easy as they thought it might be. While we might not see the switch from bottles to sippy cups as that big of a deal, babies have to learn a whole new way to drink, which can be tough. The secret on how to successfully wean baby off the bottle is to be as prepared as possible.

This means everything from picking up different tips and tricks from other parents and pediatricians to doing the transition as slowly as possible. You’ll also find that there’s a surprising amount of trial and error involved. Some babies hate certain cups for no discernible reason, so you may have to try a few different options if the first one was a no-go. While weaning might take time and patience, it is an important milestone and, at the end of the day, has to be done. Below, find some expert insight on how to wean baby off the bottle as seamlessly as possible.

How to wean baby off the bottle

One of the best tips from the experts we spoke to was to start early and take things slow. There’s no reason to wait for a certain age to take the bottle away: you can start practicing months before it should be done. “Do it gradually,” recommends board-certified pediatrician Maya Muñoz Mahmood, doctor of osteopathic medicine and Fellow of the American Academy of Pediatrics. “Babies can be offered an open cup even at 6 months of age, with an adult’s help of course. So if they’ve been drinking sips from an open cup for a while, the transition will be easier when it’s time to wean from the bottle.”

An open cup is a great way to start at 6 months old, and then you can move on to a sippy cup. “By 9 months, start putting formula or breast milk in a sippy cup in place of a regular bottle or breastfeeding at least once a day,” suggests Dr. Victoria Regan, pediatrician at Children’s Memorial Hermann Hospital in Houston, Texas. You can take your time increasing from once a day to twice a day. This gradual progression makes it easier for your little one to get adjusted and feel comfortable without their bottle.

If you’re past the point of starting months early, you can still move at a gradual pace. Start by replacing one feed a day with an open cup or sippy cup. If your little one is not having it at all, try putting water into their bottle and offering it to them. Then offer their formula or breast milk in a different cup. And remember: just keep trying and be persistent. Don’t give up after a few tough feeds.

How to wean baby off the bottle at night

It’s not uncommon for babies to rely on the comfort of a bottle either right before bed or in the middle of the night. If you want to break this habit, it might be harder than daytime feeds. You can try weaning gradually or less slowly.

If you want to start early, Regan recommends making their last milk feeding at least an hour before bedtime starting at 11 months old. To ensure they’re not waking up hungry in the middle of the night, she says to be sure they’re drinking at least 20 ounces of formula in total each day, or getting at least three breastfeeding sessions in.

If you want to wait a little longer, Mahmood says you can start slowly decreasing the amount of milk or formula in an overnight bottle at around 12 months. “What was once a 4-ounce bottle becomes a 3-ounce bottle, then 2 ounces, and so on,” she explains. “This way, babies don’t rely on those nighttime bottles as much for nutrition. They can make up for it during the day. Parents can offer sips of water at night if the child is thirsty.”

Weaning baby off the bottle at night might take longer and might make them wake up more. “If the baby awakens at night, try to soothe them first — it’s OK to use a pacifier — before resorting to the bottle,” Regan says.

When to wean baby off the bottle

You should talk to your pediatrician about when they recommend weaning baby off the bottle. While Regan says that baby should be weaned off the bottle by their first birthday, Mahmood has a slightly different take. “12 months is the recommended age to start weaning off the bottle,” she says. “I like to remind families it doesn't have to be an abrupt thing.”

You can certainly slowly start weaning earlier than 12 months, as suggested above, and aim to ditch the bottle by the time they turn one year. But if you haven’t done that, it’s okay. “Start at age 12 months and use the next couple of months to gradually get the baby used to a cup,” Mahmood says.

As long as their first birthday means you’re trying to get rid of the bottle, you’re on the right track. Prolonging bottle use can lead to dental issues later on. “Milk bottles — formula/breast milk/cow’s milk — all contain natural sugars that will cause cavities, often starting in back of teeth,” Regan explains. “Most parents do not brush their infant’s teeth right after feeding and so the sugars sit on the teeth and cavities grow. This can result in a child losing their baby teeth way too early.” She adds that prolonged bottle feeding can also hinder speech.

Both Mahmood and Regan recommend making the transition to sippy cups slowly by starting with water. They also note that it doesn’t have to be a sippy cup — open cups or straw cups are great options, too. “If a child is thirsty between meals, parents can offer water,” Mahmood suggests. “This is a perfect low-pressure time to use a cup.” You can start this as early as 6 months.

Since your baby wants to do everything you’re doing, engage in some role play. “Give your baby their cup when you are drinking from a cup — like your morning coffee — so he/she can mimic you and start to learn to drink from the cup,” Regan says.

You should also help them hold the cup, Mahmood says, especially if they’re younger than 12 months. Make it a little easier for them by offering guidance and they’ll eventually be able to do it on their own.

Some babies are more stubborn than others and will refuse to let go of their bottle. If this is the case with your little one, Regan recommends talking to your pediatrician first. You might be able to skip the bottle in order to keep offering cups, even if they’re not drinking. “In general, otherwise healthy babies who are not underweight can go a day or two without drinking from the bottle as long as they are eating solid foods,” she says.

If you do this, she recommends increasing “foods with higher water content in their diet during this time and make sure the baby is urinating at least once every eight to 12 hours — about three times a day.” Continue to offer the different cups and try several different kinds of cups until you find one they approve of.

And once you think they’re weaned, make sure those bottles stay out of sight. Donate them or toss them so that baby can’t spot them.

Weaning baby off the bottle can be stressful and can require a lot of patience. But remember: It will happen. “It will be harder on the parent than it is on the baby,” Regan says. “All babies can be weaned successfully. Some babies can successfully ‘wean’ from the bottle in one to two days, others take longer.” In other words, try not to panic. You’ll both get there.

More Like This
Cradle Cap Is Normal & So Is Your Desire To Get Rid Of It. Here’s How
Covid Vaccine “Deserts” For Kids Under 5 Make It Almost Impossible For Parents To Find Shots
Even If Your Baby Sleeps Better in Your Bed, It’s Still Not Recommended
When Does A Baby Recognize Their Father? A Pediatrician Explains
What Parents Are Talking About — Delivered Straight To Your Inbox