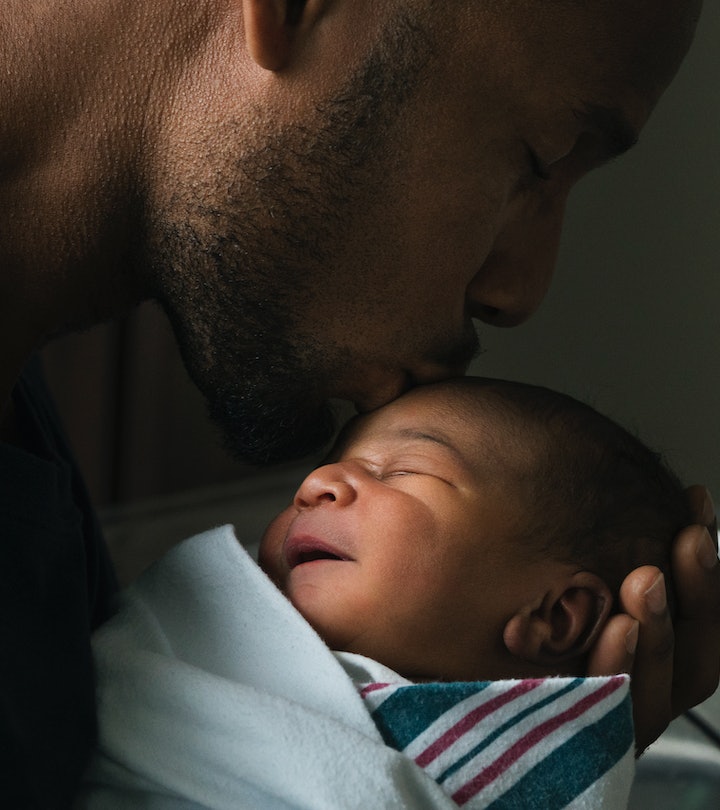 When Does A Baby Recognize Their Father? A Pediatrician Explains

Lots of snuggles are key.

It's no secret that a lot of people think that birthing parents have the advantage when it comes to bonding with baby. From carrying to delivering to nursing, newborn attachment to Mom often feels built-in. Although many fathers or partners don't have the same constant contact that birthing parents often do with their babies — particularly breastfeeding mother — it doesn't lessen the importance of their bond with their child. It’s been said that babies recognize their mother’s voice while they’re still in the womb, but when do babies recognize their father? Though it will vary from baby to baby, it may happen earlier than you’d expect. And that milestone — when you see the light of recognition in their eyes for the first time — will be worth every sleepless night.

When do babies recognize their father?

“Babies are able to start recognizing familiar voices and sounds during the third trimester,” explains Dr. Natasha Burgert, a pediatrician in Kansas City. “After birth, babies connect these sounds to the people who provide care and love.” So, yes, partners of pregnant people can begin working on their bond with Baby before they are even born. As soon as your baby is born, studies have shown that Dad can deepen the bonding process with lots of skin-to-skin time.

Babies love looking at faces. Although their vision is still developing, don’t underestimate the importance of these first moments together. “Babies can show signs of familiar connection and recognition of their parents as early as one-week of life,” Burgert explains. Another study of the predictors of father-infant bonding found that: “In female populations, factors which have been repeatedly found to promote mother-infant bonding are factors in close proximity to the birth event, such as a positive birth experience and physical contact in the immediate postpartum period (for overview, see Kinsey and Hupcey, 2013). Those factors might lay an important foundation for father-infant bonding as well and do not take place during paternal leave.” The earliest days of life seem to be extremely important for establishing a bond between Dad and baby, and so even if a father does not have much time off after the birth of a child, strong bonds can still be formed. And the more attached Baby is to Dad, the sooner they will recognize their father.

Even though, often, Mom’s role in bonding with baby is more “front and center” in the earliest days of parenting, dads deserve the same amount of attention and, eventually, recognition, from their little ones.

Dr. Natasha Burgert, a pediatrician and spokesperson for the American Academy of Pediatrics

More Like This
Why Does My Newborn Shake Sometimes? A Pediatrician Explains
Cradle Cap Is Normal & So Is Your Desire To Get Rid Of It. Here’s How
Even If Your Baby Sleeps Better in Your Bed, It’s Still Not Recommended
A Parent’s Guide To Stomach Pain In Kids
What Parents Are Talking About — Delivered Straight To Your Inbox

This article was originally published on Dec. 28, 2016