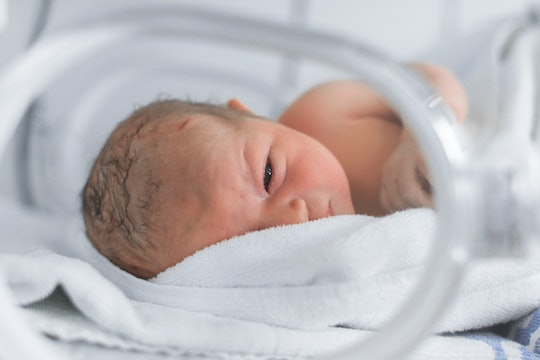 It's an important day to bring awareness, hope, and healing

Every expecting mama wishes for a healthy, full-term pregnancy. But too many of them don't have that experience. Babies who are born premature often have to fight a long, hard battle, and these little warriors deserve to be celebrated. World Prematurity Day is coming up, and it's a testament to every family who's spent terrifying days, weeks, and months in a neonatal intensive care unit.

November 17 marks World Prematurity Day, according to the March of Dimes, and it's all about raising awareness and supporting the babies and parents affected by it. The number of babies born prematurely each year is staggering — an estimated 15 million, according to the World Health Organization (WHO). In the year 2015, the WHO noted that tragically, about one million of those babies didn't survive. And perhaps even more tragically — the organization noted that the vast majority of those deaths could have been prevented.

Any baby born before the start of the 37th week of pregnancy is considered premature, according to the Mayo Clinic. The earlier they're born, the more complications they're likely to face. The American College of Obstetricians and Gynecologists noted that babies who arrive before 23 weeks very rarely survive. The odds of surviving increase for babies born between 23 and 25 weeks, but these little ones have a high chance of having disabilities and other lifelong health issues. The further a mother makes it through her pregnancy, the greater the odds her baby will survive even if they come prematurely. The University of Utah noted that 28 weekers have an 80 percent to 90 percent survival rate, while it jumps up to 95 percent for 32 weekers. At 34 weeks, survival rates are — thankfully — about the same as full-term babies.

Prematurity is an issue all over the world, but the factors that play into it vary from country to country. In high-income countries like the U.S., a WHO study concluded that prematurity rates have been affected by the number of women getting pregnant at an older age, as well as the number of women carrying multiples through the use of fertility treatments (a study conducted by Saudi Arabia's Armed Forces Hospital found that pregnant women with multiples were seven times more likely than those carrying singletons to give birth prematurely). In low-income countries, prematurity rates are driven up by infections, HIV, and malaria.

Of course, there are many cases where there's no identifiable cause for a premature birth. But as Dr. Christopher Howson, an epidemiologist and of one of the co-editors of that WHO study noted, "This is a solvable problem." There are a few basic rules women can follow to give themselves the best chance of going full-term. That includes avoiding smoking, doing drugs, and drinking alcohol, according to the Centers for Disease Control and Prevention, as well as getting regular prenatal care.

If you want to take part in World Prematurity Day, the March of Dimes suggesting wearing purple to raise awareness. And if you want to share your story of how it's affected you or your child, you can use the hashtag #WorldPrematurityDay.

More Like This
First Look: The New Jujube x Lilo & Stich Collaboration
Here's When Your Baby Might Start Sleeping Through The Night For Real
How A Recall Of Contaminated Formula Made The Formula Shortage Crisis So Much Worse
Can You Help Your Baby’s Hair Grow?

This article was originally published on November 11, 2019