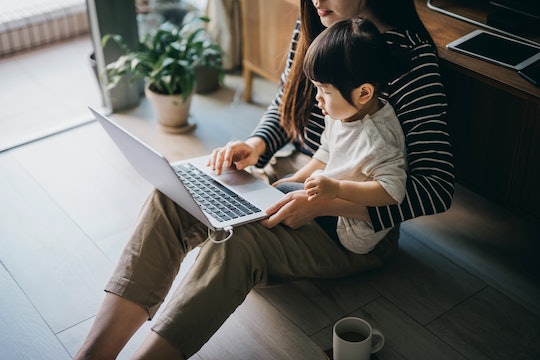 Who Claims The Kids On Taxes This Year If You’ve Got 50/50 Custody?

Handling a divorce or separation with kids in the mix can get complicated, and that’s before you even think about filing taxes for the year. But in this case, who claims the child on taxes with joint custody? Figuring out joint custody and child tax claims can feel confusing, but you’re definitely not the first people to go through this.

There are many factors parents have to consider when filing taxes, but in the case of claiming the child as a dependent, the rules are pretty clear. “The joint custody question is very common and is settled law,” as Scott Hoppe, CPA, MST, DBA, and principal at Why Blu, tells Romper.

Which parent claims the child as a dependent?

“Child-related benefits go to one person — they are never split between the parents for one child. Whoever has custody for the greater part of the year (as often stipulated in the divorce settlement) typically gets to claim the child unless the court rules otherwise. In cases where custody is split exactly 50/50, the parent with the highest income gets the benefit,” explains Hoppe. This seems straightforward enough, but of course there are exceptions to the rule.

Exceptions to the rule: Special arrangements between the parents

Parents can opt to (essentially) share tax benefits from year to year. In some cases, “a divorce or custody agreement might stipulate who claims the dependent,” as Tim Yoder, Tax & Accounting Analyst at FitSmallBusiness tells Romper. “A common scenario is for the parents to alternate the years in which they claim the dependent. The custodial parent must sign Form 8332 in the years in which the other parent will claim the dependent.” The custodial parent is generally the one who has lived with the child a majority of the year, as Yoder further explains. In the case of a true 50/50 arrangement, the question of who gets a claim as custodial parent can become complicated, and the answer may depend on your state (or particular situation). In this case, contact your lawyer for more information.

In a case where both parents want the lower-income parent (or the one who spends less time with the child) to claim tax benefits, that can be arranged. In this situation, “forms can be filed to elect to give the credit to the other parent but both parents need to sign off on that form,” says Schreihans.

This doesn’t necessarily figure into the equation. “It doesn’t matter who pays the child support, if any, it is based on the number of days” a child lives with one parent throughout the year, as Barbara Schreihans, a Certified Tax Strategist with a Masters in Taxation and owner of Your Tax Coach, tells Romper. In general, the parent who houses the child for most of the year is going to count as the custodial parent. (This is true for parents without an exact 50/50 custody split.)

What if both parents try to claim their child on their tax returns?

Even if it’s a tough situation, try to get everyone on the same page before submitting all tax info. “If both parents claim the same dependent, the IRS will reject (one) or both tax returns. If it isn’t resolved, the IRS may audit both tax returns and investigate the facts to decide who gets the benefit,” says Hoppe. “Obviously, it is best for everyone involved to resolve the situation before it gets to the IRS.” Because co-parenting with a difficult ex can get tricky, as noted in Romper, don’t hesitate to call in a lawyer, counselor, or other mediator for help.

Although joint custody arrangements can get complicated, the tax laws about claiming dependents are (for the most part) clear and straightforward.

Barbara Schreihans, a Certified Tax Strategist with a Masters in Taxation and owner of Your Tax Coach

More Like This
Tips For Apple Picking With Kids
If Breastfeeding Makes You Tired, Here’s How To Keep Your Energy Up
These 9 Potty Training Techniques Will Work On Even The Most Stubborn Toddler
Here's How To Handle Potty Training During Nap Time

This article was originally published on March 1, 2019