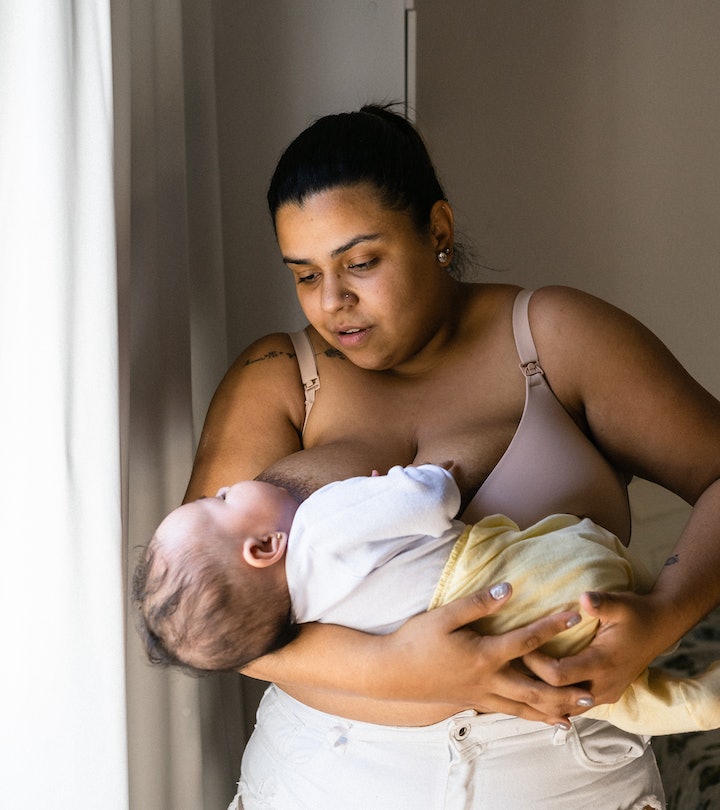 If Your Nipples Feel Sore Between Feedings, Here's What You Should Know

My nipples went through the ringer when I was breastfeeding my children. At times they were sore, numb, scabbed, leaking, or felt like they'd been dragged across a cheese grater. The periods between feedings were a respite from the discomfort that often accompanied nursing in those first few weeks of breastfeeding, but sometimes, people don't get that reprieve. Your discomfort may continue or even worsen in the interim — and the question of, “Why are my nipples sore?” feels like a constant. But what does it actually mean if your nipples hurt between feedings? It's a complex problem.

Reasons your nipples hurt between feedings

Typically, nipple pain can be attributed to general injury to the tissue of the nipple and areola during the normal course of breastfeeding. "Most women experience some pain between feedings because of the daily stress on the nipples during breastfeeding," Shari Hughes, international board-certified lactation consultant (IBCLC), tells Romper. "Women's nipples are strong and can take a beating, but they are still vulnerable to damage like any other area of the body."

To get down to specifics, there are multiple reasons a person's nipples might hurt between feedings. “If the parent has a newborn or young baby, the most common reason is due to repeated nipple trauma,” as Chrisie Rosenthal, IBCLC with The Lactation Network, explains to Romper. “Examples include a shallow latch, suboptimal positioning, or tongue tie. If the baby is older, underlying causes might be teething or distracted breastfeeding.”

"There are problems like deep bruising that can occur with a bad latch that might spasm between feedings," Hughes adds. She also notes that the wet surface of the nipple sliding across the inside of a bra or across a milk pad might also increase tenderness.

Because there are many different possibilities when it comes to nipple pain, it can sometimes make identifying the cause on your own tricky. And while a lot of nipple sensitivity between feedings has a quick fix once you identify the issue, there are times when there is an underlying condition that may cause nipple pain that needs to be seen and treated by either a certified lactation consultant or an OB-GYN.

"There are also problems inside of the breast itself, like Raynaud's phenomenon or plugged ducts, that can cause nipple pain,” says Hughes, both of which must be diagnosed to be treated. Sometimes, she notes, it's as simple as a quick call to an IBCLC or OB-GYN and a description of symptoms, but it's equally likely that it needs to be fully evaluated by a professional. Often, you might think you know where the problem is, only to find out it was coming from a completely different direction.

Yes, it might hurt for everyone when a baby tries to chomp off a nipple with their gummy little face, but it is possible that the shooting pain or blanching of your nipple might be an autoimmune response that requires a bit more treatment than warm compresses in your bra. Seeking professional help is a must to sort out the issue.

What to do about nipple pain while nursing

The best thing to do if your nipples are sore between breastfeeding sessions is reach out to a medical expert, even if the reason for the pain ends up being something pretty minor and fixable. “If you are experiencing any breast or nipple pain beyond mild discomfort in the first couple weeks, reach out to an IBCLC for help,” Rosenthal says. “There is a very pervasive (and dangerous) myth that ‘breastfeeding just hurts, and you have to push through it,’ when meeting with a lactation consultant will often resolve your breastfeeding issues and bring quick relief.”

Hughes says that more often than not, it's something that's relatively easy to correct. "Every case is different, but patterns tend to come up." Is it possible to learn what it means if your nipples hurt between feedings without being seen by a pro? "It's possible if you have a good working knowledge of how your body has performed in similar circumstances, or if you have an idea what's causing it to begin with. Like I said, sometimes all it takes is a quick call, but because there are so many balls in play, it's best to assume a place of ignorance and get an outside opinion," she explains. If it's a latch issue, for example, an IBCLC can evaluate both your baby and your breast (along with the way you're holding them), your body language, and perhaps even your diet and activity habits.

Hughes also recognizes that IBCLCs won't always have the answers. "I can get a good idea of many issues of the breast, being both a nurse and lactation consultant, but for more anatomical problems, especially those which might be medically related, I will always refer you back to your OB-GYN or primary care provider."

Every specialty provider has their limits, and it's good to know where they stand on what knowledge they have. "If you see an IBCLC over and over and you're not satisfied, please get another opinion,” Hughes says. “Getting good answers and treatment will help you continue to breastfeed in the long run." It might be absolutely nothing more than just tortured tatas, but in this case, it's better to be safe than sorry.

More Like This
Cradle Cap Is Normal & So Is Your Desire To Get Rid Of It. Here’s How
A Parent’s Guide To Stomach Pain In Kids
Parents Have Thoughts After Court Orders Nursing Mom To Use Bottle In Custody Dispute
Chrissy Teigen Nodding Off While Breastfeeding As Miles Chats Away Is Too Relatable
What Parents Are Talking About — Delivered Straight To Your Inbox

This article was originally published on Feb. 6, 2018