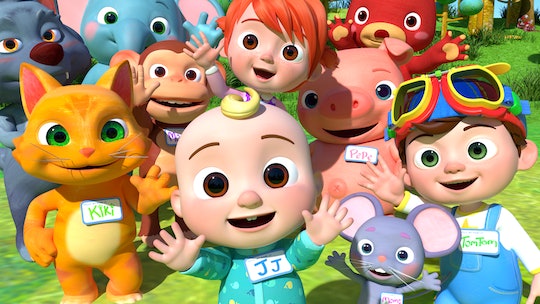 Even if you aren’t.

If you have a baby, chances are good you've heard of (and probably spent many hours watching and/or listening to) CoComelon. The Netflix show and most-watched YouTube Channel out there is a family favorite, and babies, toddlers, and even some older kids just can't seem to get enough of it. But after days spent watching the same thing over and over again, you might start to wonder why, exactly, babies love CoComelon so much.

Is it the realistic 3D animation? Is it the repetitive nursery rhymes that get stuck in your head for days on end? Is it the bright colors that flash in their little faces? Sure, CoComelon is full of cute characters like JJ and Cody, but as an adult, it’s hard to really understand the appeal of the show (obviously; it wasn’t made for us). The storylines are silly and the songs are exhausting, and you might be concerned it’s a little too overstimulating. Whether you’re just curious about why your little one likes it or you want to try to recreate a similar experience without screen time, there are some answers below.

CoComelon is an American show featuring 3D animation that started as a YouTube channel and is now a streaming media show as well. It often doesn’t even really feel like a TV show – it’s more of a long series of nursery rhyme compilations. Episodes consist of popular nursery rhymes being sung along to story animations that are only sometimes relevant to the song lyrics. Some of these songs are classics you’ve likely heard many times before (like “Twinkle Twinkle Little Star”) and others are original to the show.

The series is known for its bright colors and repetitive sounds and songs, and for adults, it can be beyond irritating. For kids, especially little ones about three years old and younger, it’s utterly captivating.

Why do babies love CoComelon?

Experts say babies are obsessed with CoComelon because of a mix of different things. "Infants, toddlers, and preschoolers find these programs attractive because they provide a multi-sensory experience that is engaging without being overwhelming," Nicole Beurkens, Ph.D., licensed psychologist, explains to Romper. "Young children are drawn to the bright visuals — especially the focus on big eyes and faces — the repetitive music and sounds, and the constant movement and action on the screen."

One of the things that sets CoComelon apart from other animated shows made for kids is that it’s stimulating without being overwhelming, says Beurkens. It’s literally made with babies in mind: “The graphics are simple, and characters often have larger heads/faces because babies and children are naturally drawn to them, just as they are to the faces of people in real life," she explains. "These videos have constant action, but not so fast-paced that it is overwhelming."

One glimpse at CoComelon, and you'll notice how bright it is. Babies love this, because it works with their line of vision. Since their vision is still developing, babies are naturally attracted to the bright, flashy visuals you’ll find on the show, explains Laura Froyen, Ph.D., a family therapist. “They tend to prefer brighter colors with more contrast because they can see them better. They also are easily distracted, so fast moving and flashy images hold their attention longer by consistently redirecting their focus."

While the colors might seem too bright, they can actually teach babies something. Red, blue, and green are three hues seen throughout the CoComelon videos, and Jocelyn M. Wood, a bilingual speech language pathologist, tells Romper that children are naturally drawn to these shades, which can stimulate a child’s cognition. "The bright colors in CoComelon are so distinct that it will really help a child to identify individual colors, which will lead to color naming,” Wood says.

It's not just the colors, though: it's also the repeated nursery rhymes and phrases. This repetition that we, as adults, probably find to be extremely annoying is another thing that makes babies and young children so entranced. "Children’s brains thrive on patterns and routine," Beurkens says. "There are patterns of visuals, sound effects, music, and the flow of activities that is consistent and predictable throughout each video episode."

So while you might get irritated by hearing the same nursery rhyme over and over again, your little one is actually loving it — and genuinely learning from it. "Children often want to hear the same songs and read the same stories over and over because that is how they learn best," Froyen says. "They have very limited long-term memories, and so they use strategies like rehearsing and repetition to move things that are important to them from working memory into short-term memory. Repetition is also one way they process new information."

Is it bad for babies to watch CoComelon?

At the end of the day, babies love CoComelon because it's bright, flashy, entertaining, and full of repetition that feels comforting to them. So is it a bad thing if you let them watch it every now and then? Opinions are mixed, but Froyen recommends a balance.

"Currently the American Academy of Pediatrics does recommend limiting screens for children under 2 to one hour a day or less of high quality programming, and that parents view alongside their child and then reteach and rehearse afterwards," she says. "They strongly recommend that kids under 18 months only use screens interactively, like for video chatting. That said, balance is incredibly important, and if a show your child loves allows you to make a meal or engage in self-care, it's OK to consider the health and well-being of the whole family." Even if that means you're singing CoComelon songs the rest of the day.

If you feel like you need to put CoComelon on once in a while to entertain your little one or to just get a few moments of sanity for yourself, that’s fine – don’t beat yourself up for it. There are so many reasons your baby loves CoComelon, and it’s okay to let them enjoy it sometimes.

More Like This
There’s A Reason Your Baby Always Falls Asleep While Breastfeeding
Parent's Guide To A Baby's Dry Cough: Why They Happen & How To Treat
Can You Breastfeed After A Breast Lift? Experts Explain
43 Awesome Toys For 18-Month-Olds

This article was originally published on November 4, 2020