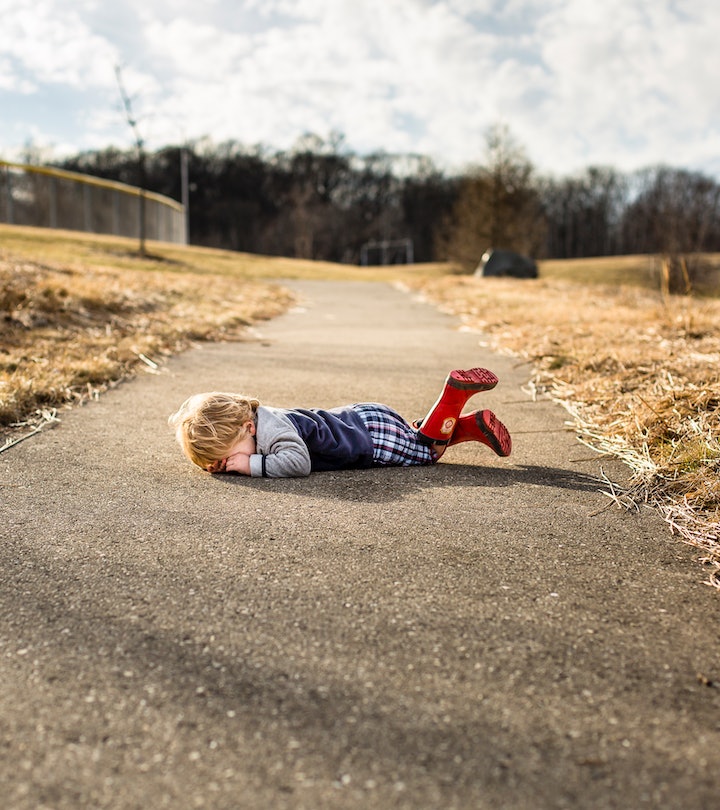 Why Do Toddlers Throw Themselves On The Ground During Tantrums? They Have Their Reasons

by Katie McPherson
Updated: November 22, 2022
Originally Published: Feb. 19, 2020
We may receive a portion of sales if you purchase a product through a link in this article.

Parents of children who are in the toddler tantrum phase know all too well that the screaming, crying, perhaps-we-need-an-exorcism fits can be tough. But why do toddlers throw themselves on the ground when they get really worked up? Why is a full-body collapse the normal response to the myriad frustrations that trigger toddler tantrums — the fact that an orange is not an apple, for example — and how do you get them back up? How do you recover and move on from a meltdown that brings your overwhelmed kid to the ground? Well, toddlers throwing themselves on the ground during a big tantrum is a pretty common thing and there are a few things you can do to help them get through the moment and back on their feet.

Why do toddlers throw themselves on the ground during a tantrum?

First, even though they’re unsettling and often very frustrating, toddler tantrums are universal. All over the world, toddlers express themselves through tantrums that tend to share the same characteristics, according to a study by researchers at the University of Minnesota. From whining and stomping when slightly inconvenienced, to throwing themselves on the ground or getting violent when super angry, all toddlers tantrum in basically the same ways. And though it can be challenging, it may help to remember that tantrums are a natural part of child development.

Throwing themselves down during a tantrum may be a child’s way of getting their feelings noticed, explains Stephanie Chapman, a psychologist at Texas Children’s Health Plan The Center for Children. “From a behavioral and learning theories standpoint, children fall to the floor during tantrums because it has a function; often because it elicits sympathy or a response from the people around the child, like the child getting picked up and soothed,” she explains.

What is a ‘temper tantrum’?

Tantrums usually happen when a toddler comes up against something that frustrates them — a household rule or boundary, not getting what they want, or their favorite parent leaving the house. Experts say they’re just a natural byproduct of having big feelings, but no control over them yet.

“For toddlers, there is a stress response all human beings have that little ones have bigger because they don’t have a fully-developed brain,” says Aliza Pressman, co-founder and director of the Mount Sinai Parenting Center in New York City. “Their most evolved part of the brain is the part that goes right into fight, flight, or freeze. If they feel threatened — and a 'threat' can be not getting what they want or not liking a situation — until you develop the tools and brain capacity to manage those emotions, you’re going to end up throwing a tantrum.”

What to do when your toddler is having a temper tantrum

So, if your toddler throws a huge tantrum and ends up on the ground, how can you get them back on their feet and back on track? The short answer is that the best thing to do is nothing. You’ve pretty much need to simply wait them out and focus on trying to keep your cool.

“There’s not much you can do during the tantrums. If we argue, rationalize, soothe, or cajole the child, often this attention will reinforce the tantrum and cause it to happen in the future,” says Chapman. What she recommends doing during body-flinging tantrums is, above all else, to stay calm.

Then, if there is no immediate instruction that needs to be carried out, try to ignore the tantrum as best you can. Praise other children for staying calm so that they aren’t observing a tantrum and thinking it’s the thing to do. Remove the audience from the child so the stress in the room goes down. If it’s a crowded place, consider carrying the child to a calmer, quieter space.

As soon as your child calms down, Chapman says, return with attention and praise. Let them know you are happy they calmed down, and if they need reassurance, a hug, or help, give it to them then. Finally, it’s time to complete the task that started the tantrum.

For example, if your little one is throwing a tantrum about having to get in the car seat, place them in it while ignoring the outburst. Again, eventually when the child calms down, offer praise.

“To help get rid of tantrums over time, parents can also consider praising or giving attention more to kids when they are doing the opposite of tantruming,” Chapman explains. “Catch kids being good, staying calm, working through a problem, and praise them for their efforts” Another strategy she recommends is to try and prevent the tantrum by being aware of their timing.

“For example, if a child is always hungry at 4:30 p.m. when meltdowns start, feed her earlier. If a child always tantrums when it’s time to turn off the TV and get dressed, change up the routine to have the sequence of get dressed, then TV,” she says. Helping your child learn to regulate their emotions at this age will affect them positively later in life.

“We know from studies that parents who help children get back to a place of regulation and calm when they’re experiencing that level of distress, it’s predictive of later self-regulation,” Pressman says. “You’re kind of co-regulating now in the service of helping them self-regulate later.”

Stephanie Chapman, Ph.D, psychologist at Texas Children’s Health Plan The Center for Children and Women and assistant professor at Baylor College of Medicine

This article was originally published on Feb. 19, 2020