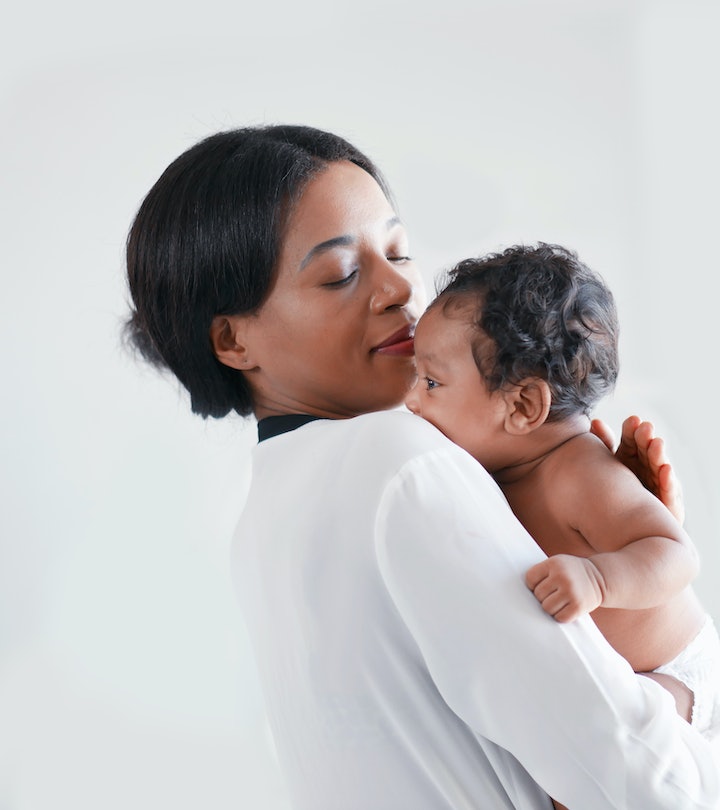 Why Your Baby Rubs Their Face On You, According To Science

Let's face it, babies do some weird things sometimes, be it excessive hiccups, tight grips around your finger, and startling jerky movements. Sometimes, these odd behaviors can be attributed to just plain personality quirks and preferences. Most of the time, however, there are reasons why babies act a certain way or engage in some seemingly strange behaviors, many of which can simply be chalked up to science and our innate biological behavior as humans. Newborns, in particular, can produce some head-scratchers, like explosive bowel movements, crying in their sleep, or rubbing themselves on absolutely everything, including you. As your little one rubs herself all over you once again, you might wonder, "Why does my baby rub their face on me?" According to Dr. Laura Sinai, M.D., a board-certified pediatrician with Pediatrics At Home, it's a completely natural behavior.

“While it’s certainly age-dependent, we don't ever think of anything worrisome about that behavior,” Sinai tells Romper. As it turns out, there are several reasons why your baby might rub their face all over you. So, to answer the puzzling question of why your baby rubs themselves on your chest, shoulder, stomach, or wherever, here’s what doctors and science have to say about it.

The most probable reason your little babe is rubbing her face on you is because of an involuntary primitive motor reflex newborns have called a rooting reflex, which signals that your baby is hungry. Rooting helps her find the nipple when it's time for her to eat, according to Sinai. When your baby is rooting, she may rub her head from side to side on your body to signal she is hungry and looking for a nipple.

“We know that the rooting reflex is related to feedings, specifically breastfeeding, but even bottle-fed babies in the early period will rub their face to try to find the source of feeding, because that source evolutionarily would be the nipple, and they need to find that,” explains Sinai. “Parents can use that fairly accurately as a sign that a baby is hungry.”

The younger the baby, the more likely that rubbing her face all over you is going to be related to rooting. The rooting reflex is present at birth and usually lasts approximately four to six months, although when these primitive reflexes will disappear and be replaced with voluntary motor functions can differ, according to studies.

In addition to causing your baby to rub her face on your chest, the rooting reflex can also be elicited, according to Sinai. If you rub the side of your baby’s face, the reflex will instinctively initiate, and she will start to reposition her body to that side.

Another reason your newborn or older baby might be rubbing their face on you is to signal that they're tired or ready for bed. Babies tend to rub their eyes or ears when they begin to tire, in the same way that adults do. “Just like we would rub our own faces with our hands, they may just rub their face on you out of fatigue,” says Sinai.

If your baby combines rubbing their face with snuggling into you or a stuffed animal, this could mean they're ready for some sleep.

Another reason your baby might be rubbing their face on your body is simply just itchiness, especially if they haven’t developed motor skills and coordination yet, Sinai explains.

“For the very young infant, they don't have that great control over their hands, so they could just be literally wiping their boogers on scratching an itch on their face,” she says. “A lot of babies will lay in cribs and rub the back of their head, basically scratching the back of their head, so if they do it on you, it’s the same kind of thing — they just find a nice surface to rub their face on.”

Though infants begin to gain control of their hands between three to four months, their movements are not so fine-tuned. Much to their frustration, they can’t usually get their hand to the right place or fully control their arms until they reach around nine to 12 months, according to a 2017 study on the development of motor behaviors. Thus, they choose you as the best vehicle for them to self-soothe.

4. Getting Close To Mom’s Smell

Your baby might also be rubbing her face on you because she innately wants to get close to your natural smell. In fact, studies have indicated that pheromone-like chemical signals likely play a role in offspring identification and mother recognition.

“They may be trying to get a good whiff of mom, because that's a way to know that they’re in the right place,” says Sinai. “Every other animal in the animal kingdom uses smell to make sure that they're with the right baby or with the right mommy, and we do the same.”

As it turns out, babies begin to recognize their mom’s scent before they are even born, as Dr. Jessica Madden, M.D., a pediatrician and neonatologist with University Hospitals Cleveland Medical Center, previously told Romper. “Their sense of smell develops early on during pregnancy, and the first smell babies are exposed to is the odor of their mothers’ amniotic fluid."

This is one of the reasons why, as Sinai explains, babies find the right places to go when they are doing their newborn crawl, and it may be another reason why they want to rub their face all over their parents.

Ultimately, there are many explanations as to why your babe is rubbing her face on you. Whether she's hungry, tired, itchy, or just wants to be close to you, her rubbing behavior is likely completely natural and might actually clue you in to just what she needs at that time — even if it does feel like a baby goat butting you with her sweet head.

This article was originally published on June 28, 2017