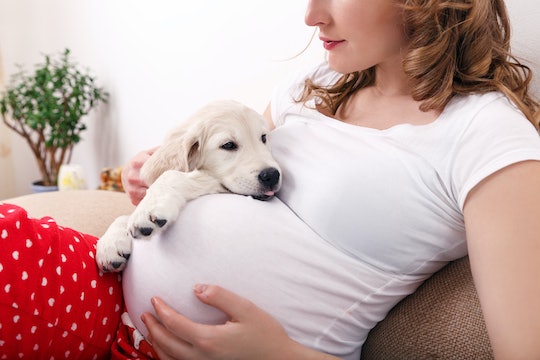 5 Signs You're About To Go Into Labor, According To Your Dog

Few things are sweeter than seeing your dog nuzzle your baby bump, but what does it mean when they do something that's really out of the ordinary for them, especially if your due date is not too far away? Could your favorite four-legged companion actually be trying to tell you something? Can your dog sense that you're about to go into labor? It may not be the first time that they've tried to warn you about something.

If you ask Dog Whisperer Cesar Millan, the answer is yes, your dog can tell when their human parent is going into labor. Dogs have been able to predict earthquakes, storms, sickness — even when a woman is about to give birth, explained Millan. But there isn’t much by way of scientific evidence to support how dogs respond to an owner’s pregnancy and labor, according to Erin Askeland, pet behaviorist. She does tell Romper, however, that "there are many statements from women and surrounding family members that support these claims, along with the knowledge that dogs can detect certain things in the body like insulin levels, oncoming seizures, and even cancer; so the claim that they can also detect shifts in a woman’s body during pregnancy isn’t farfetched, particularly over the nine-month span of pregnancy."

If you're like most pet owners, you've probably seen your dog display some remarkable intuition. Whether it's pacing before a storm or barking at a person you've always disliked, dogs sometimes seem like they literally possess a sixth sense. In fact, 72 percent of dog owners said they've gotten weather warnings from their dogs, and 47 percent of dog owners say their pets have alerted them to bad news, according to NBC News, reporting on an Associated Press-Petside.com poll. These owners cited various ways in which their dog let them know something was amiss, including being overly hyper or barking persistently.

There are plenty of other examples of dogs knowing things before we do too. So what are some ways that dogs tell us that labor is nigh? Here are some remarkable firsthand examples from mamas with some pretty amazing pups.

More Like This
Can Swimming Induce Labor? Experts Weigh In
How Long Does It Take For Sperm To Induce Labor?
This Is How Your Water Breaks During A C-Section
Barre Could Be The Low-Impact Prenatal Workout You Need

This article was originally published on June 11, 2018