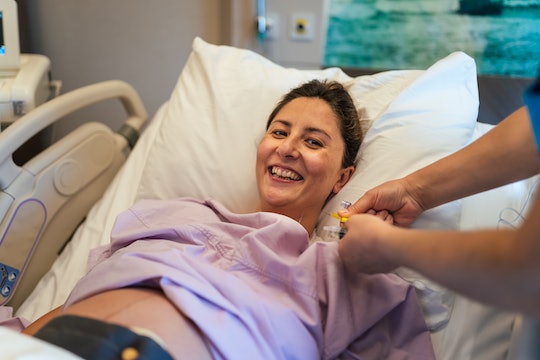 All Praise The Epidural

My birth plan was always and simply to “get an epidural.”

I think about my births often. Not necessarily the obvious parts. Yes sure, I remember fondly getting to hold both my babies for the first time, but what I really find myself going back to are the feral moments.

“I don’t think I can have another baby, but I would have another birth, does that make sense?” I texted a mom friend recently, at an unseemly hour. She didn’t get what I was saying at first but then I clarified, “for the epidural.”

I always flash back to my first delivery, sitting on an exercise ball in the hospital room, trying to remember how to breathe properly while my husband rubs a chunk of my lower back until it’s raw, trying to ease the pain from my contractions. I recall feeling like I was going in and out of consciousness, roiling with a hot, searing pain that started in my uterus but radiated out to the tips of my toes. Every part of me felt foreign, taken over by the screaming sobs of my own discomfort. It felt like a kind of suffering that would never end, and that nothing could make me feel better, feel human, feel like myself.

And then it did.

Because of the epidural I was able to sleep, listen to music, and crack jokes with my husband. I thought about the baby and this strange new life that was coming, but I also thought about nothing, a rare privilege. And most importantly to me, I felt like myself.

When the anesthesiologist came and the epidural started working its way through my body, a slow, syrupy warmth fell over my lower half and everything just … relaxed. I had an intense feeling of euphoria, from the drugs, yes, but mostly from the absence of pain, the sudden awareness of what I wasn’t feeling, as much as what I was.

That first delivery, my water broke but I wasn’t dilating and so I just waited — I was in labor for almost 24 hours. But because of the epidural I was able to sleep, listen to music, and crack jokes with my husband. I thought about the baby and this strange new life that was coming, but I also thought about nothing, a rare privilege. And most importantly to me, I felt like myself. It was me greeting that 8-pound baby boy after an hour of pushing, not a wild-eyed, animalistic version of myself. Me.

A lot of my friends were pregnant or had had babies that same year, so birth plans were a constant topic of conversation. Some were incredibly elaborate and intentional, but mine was always and simply to “get an epidural.”

When I would articulate this to my friends who were still poring over their dog-eared copy of Ina May Gaskin’s Guide to Childbirth, they were a little aghast. “Hold out as long as you can,” they’d warn. “Uh OK, I don’t know why I would do that, but hey thanks for the advice!” was ever the refrain from my end.

I can understand the reasons some people don't want an epidural, but I’ve always been surprised by how averse so many are to the mere idea. I get the sense, on some level, people still see labor and delivery as a woman’s first opportunity to martyr herself in motherhood, to begin her life as a mom in suffering, in constant deference to the idea of who she should be rather than who she is or wants to be. Why does my ability to endure pain make me a good parent?

In many ways, when we actively discourage women from readily accepting pain relief, we encourage the idea that birth is not something to be enjoyed but something to be endured. But I did enjoy both my births, precisely because I wasn’t focused entirely on the horrifying pain I was in.

Why does my ability to endure pain make me a good parent?

I used to talk about that and about my epidurals with a bit more shame, a bit more hesitance, like I should feel bad about accepting, even enjoying, the pain relief. For those who hadn’t had an epidural, there was a misconception that I’d somehow skirted around the hard parts of labor and delivery. But the truth is an epidural can’t get you out of the act of giving birth; in some ways, pushing can be even more difficult. I certainly don’t feel like I escaped anything or got off easy, so why did I initially struggle with articulating this? Part of me felt judged, like I had already failed an important test of motherhood. And maybe I judged myself a little for not caring at all if I had.

About a month and a half after my first delivery, I went to get my eyebrows done. I was still a bit uncomfortable physically, but I really needed something to make me feel like Amil again. A few minutes into sitting in the chair, the eyebrow threader asked me if I’d had my baby the “right way.” I didn’t need to prod her to know what she meant. She was asking, in a remarkably f*cked-up way, if I’d had a medication-free vaginal birth. I laughed it off in the moment, but will never forget the assumption about how this monumental act should be done and how many complete strangers have opinions and ideas about the kind of mother you are depending on your answer to this question.

Many people struggle with feelings of disappointment and regret around their birth experience, often due to circumstances out of their control. But some of those feelings are down to the shame we impart months before, in how we talk to each other about comfort and pain relief and how our collective vision for the “ideal mother” is still built around a narrative of maternal sacrifice and suffering. In the end, both times I gave birth exactly how I wanted, pain-free and feeling like me. Even in writing that, I know how rare the sentiment is and I’m still grateful for it, thanks to the support of my No. 1 birth partner: the epidural.