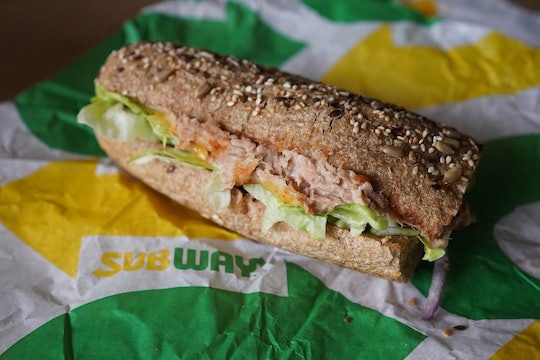 Here's The Deal With Eating Subway Sandwiches While Pregnant

Just in case you're craving a sub...

There are so many dos and don’ts when it comes to food and drinks during pregnancy. You're told to eat lots of leafy greens and healthy dishes, but you're not supposed to eat certain cheeses or your favorite sushi dish — even as your cravings are telling you to eat everything under the sun. So, what about grabbing a quick bite of your favorite deli sub at one of your go-to food joints? If you’re a sandwich nut, you might be wondering, “Can I eat Subway while pregnant? Why am I having a sudden craving for a $5 foot-long?”

Put simply, the answer to whether or not pregnant women can eat Subway sandwiches is sometimes. You can still enjoy foot-long subs as long as you take some essential precautions — for example, if you were planning on ordering and eating a Subway club sandwich, you would be out of luck unless you toast it. Confused yet?

While most of what’s on the menu at Subway is totally safe, there are some key ingredients that you should steer clear of when you’re expecting. For all the details on what pregnant people can and can’t eat off of the Subway menu, as explained by medical experts, read on.

Doctors typically “consider deli meats unhealthy and unsafe to consume” for pregnant people, board-certified obstetrician and gynecologist Dr. Kameelah Phillips tells Romper. Pregnant women are advised to avoid eating deli meat sandwiches that include cold meats, such as turkey, ham, and roast beef — so it looks like you’ll have to cut cold cuts from your diet for a while.

“Deli meat is not safe for pregnant women to have, as there's a risk that it may contain Listeria, a bacteria that is harmful and could result in stillbirth or miscarriage,” Kara Hoerr, RDN, a registered dietitian nutritionist, tells Romper. Listeriosis is a rare but very harmful infection caused by food contaminated with the bacterium Listeria monocytogenes, and it is particularly dangerous for pregnant people.

In fact, pregnant people are 18 times more susceptible to Listeria infections than the general population, according to a 2017 study published in the Archives of Gynecology and Obstetrics. While a listeriosis infection may only cause mild, flu-like symptoms for the mother, coming in contact with Listeria can be deadly for fetuses and unborn babies or cause lifelong health complications such as blood poisoning, according to the U.S. Department of Health & Human Services.

Given that, you’ll want to steer clear of cold cuts if you’re craving a Subway sandwich.

What pregnant people can eat at Subway

Luckily, Subway still has a variety of food options that are safe for pregnant people. Everything from Subway’s steak and cheese, oven-roasted chicken, meatball, and tuna sandwiches are just fine for pregnant women to consume, Dr. Phillips explains. If you are concerned about cheese, there is no need to worry in this situation, as all of the cheese varieties at Subway are made from pasteurized milk, according to the food retailer — meaning they are safe for pregnant people to consume.

There is also a bit of a caveat when it comes to eating deli meats while you’re pregnant. Though you should absolutely stay away from cold cuts, you can eat those otherwise potentially risky meats if you heat them up properly. “No matter what kind of deli meat it is, in order to safely eat it, it must be heated up to an internal temp of 165 degrees Fahrenheit,” Hoerr previously told Romper. If you really are hankering for some deli meat, make sure it comes out of the oven or microwave steaming hot.

The golden rule to remember is that the meat in your sandwiches should be hot, not cold. But remember, there are also other options at Subway to fulfill your sub craving. So, go ahead, get your Subway groove on — just skip out on the luncheon meat (or ask for it toasted).

More Like This
32 Zippy Girl Names That Start With “Z”
What Foods Fight Nausea During Pregnancy?
Is Raspberry Leaf Tea Safe To Drink During Pregnancy?
58 Perfect Literary Boys Names
What Parents Are Talking About — Delivered Straight To Your Inbox

This article was originally published on Aug. 10, 2017