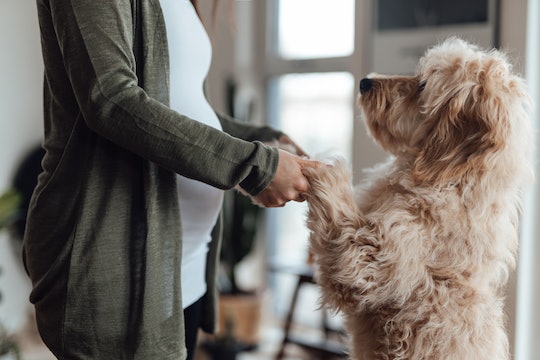 Everybody wants a snuggle.

My husband and I call our house the funny farm, as all four of our animals are always doing something goofy. The cats constantly knock stuff off tables, and the dogs constantly jump onto the couch for snuggles or to “guard” our house from other dogs being walked by their owners. One of our beagles loves to jump directly onto your lap with all of her 30 pounds, and since my husband and I are trying to conceive, I started to wonder, can my pet hurt my baby if they jump on my stomach? I don’t know if I’m pregnant yet (I’m still in my two week wait, so fingers crossed), but could my beagle potentially hurt the baby if we don’t train her to not jump up on us sooner rather than later? And what about my ding dong cats? One of them weighs almost 17 pounds since he’s a Maine Coon mix. Could he potentially be a problem when he jumps up for head butts and pets?

Can your pet or child hurt your unborn baby if they jump in your lap?

When asked what the average maximum weight was for a pet or a child that could jump into your lap or lower abdomen before there was a chance of injuring the unborn baby, Dr. Yvonne Bohn, OB–GYN at Providence Saint John’s Health Center in Santa Monica, California, says, “I cannot be specific about exactly how much an animal or a child can weigh and be safe to jump on her belly. It is not so much about the weight, but more about the severity of force that is applied to the abdomen.”

Yikes. So what happens if that does occur? “In general, we do not want anything to jump on, kick, or place direct force on a pregnant woman’s abdomen, because if the placenta is hit, separation of the placenta from the uterus can occur which is called placental abruption. If the separation is significant, it can cause a woman to go into labor and depending on the gestational age of the baby can cause loss of the pregnancy or a preterm delivery. This doesn’t happen every time force is applied on the abdomen and it does depend on the trimester,” Bohn explains to Romper.

Is it more dangerous for your pet or child to jump on your lap as your pregnancy progresses?

According to Bohn, as the pregnancy progresses, the “safe area” of your abdomen during pregnancy becomes smaller. During the first trimester, your uterus is still below your pubic bone, so trauma won’t likely hurt the pregnancy. But once the uterus is out of the pelvic area, after the first trimester, direct trauma can definitely hurt the baby, Bohn says. “If the force is very strong, we usually recommend that the mother be monitored after an event to make sure this has not occurred.” What about if your pets jump up and put their paws on you to greet you when you come home? Bohn says that should be OK, as long as they don’t do it really hard.

So it looks like some doggy training classes are in my beagle’s future, and I’ll be sitting on the couch with multiple pillows on my pregnant belly to guard it from the cat jerks. Like I said — funny farm. If one of your critters does jump on your stomach after the first trimester, it may be a good idea to call and make an appointment with your OB-GYN to make sure everything is OK, especially if you experience vaginal bleeding, an amniotic fluid leak, contractions, or a decrease in fetal movement.

More Like This
Considering Getting A Tattoo While Pregnant? Here’s What To Know
Can Swimming Induce Labor? Experts Weigh In
Barre Could Be The Low-Impact Prenatal Workout You Need
What You Need To Know About Eating Burrata During Pregnancy

This article was originally published on Sep. 20, 2017