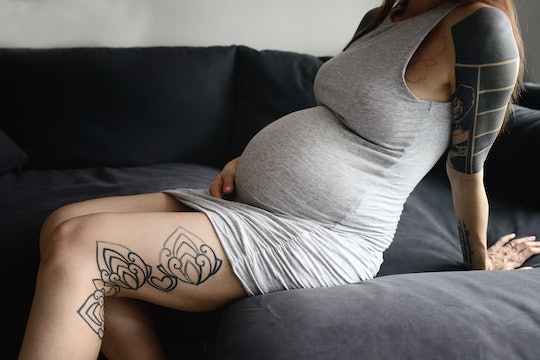 Considering Getting A Tattoo While Pregnant? Here’s What To Know

Experts recommend putting your plans for new ink on pause.

Tattoos can be wonderful way to honor significant life events or people who are important to you — they can also just look cool. Getting a physical piece of permanent artwork that reminds you of something you love is a common reason for many to visit a tattoo parlor. Pregnancy, for example, is a very important time in your life, and the baby you’re carrying is intrinsically linked with you forever. It makes total sense if you are inspired to get some new ink while you’re pregnant — or maybe you’re feeling creative and just thought of a design that you have to have. Regardless of the reasoning, can you get a tattoo while pregnant? Is it safe?

Although you might be tempted to get a tattoo during pregnancy, experts advise waiting. “I would definitely recommend against it,” Dr. Cheruba Prabakar, M.D., a board-certified OB-GYN, tells Romper. “It's not one of those things you really need to be doing when you're pregnant. I think there's more risk of harm than any good that’s going to come out of it.” For all you need to know about getting inked when you’re pregnant, including why it’s not recommended and when it’s safer to get a tattoo, read on.

Risks of getting a tattoo while pregnant

The biggest reason to refrain from getting a tattoo while pregnant is to avoid the risk of infection. “These days most tattoo parlors use sterile stuff, like needles ... but there's always that risk of infection, even when you’re not pregnant,” Dr. Prabakar says. “When you're pregnant, you are more compromised, so sometimes people can be a more susceptible to infections in their skin.”

While most tattoo shops are clean and safe, Dr. Prabakar says that there’s always a small chance of contracting STIs, such as HIV and hepatitis B and C, from dirty needles. And you’re not just risking your own life and health when you’re pregnant — you’re risking your unborn child’s, too. In addition, there is the risk of your skin reacting poorly to the tattoo ink. “The other concern is local reactions from the ink,” Dr. Prabakar says. “Most people do well, but if you are that one person who actually gets inflammation or skin redness that becomes more of a systemic infection, you are going to do much more poorly if you are pregnant.”

Most reputable tattoo artists won’t even work on you if they know you’re pregnant (and no, that doesn’t mean you should just leave that information out when you go in for a consultation). In fact, many tattoo parlors have policies up front to not to tattoo anyone who is pregnant. “When tattoo procedures are done clean and sterile, you’re able to eliminate risk during the actual procedure,” Owen Beane, a tattoo artist at Chameleon Tattoo in Cambridge, Massachusetts, tells Romper. “But risk and liability comes in after [the] procedure is done and the aftercare is in the person’s hands. There exists a potential for infection,” just by nature of the tattooing procedure.

Although there are no studies available about how tattoo ink affects fetuses or even babies during breastfeeding, anything that enters your bloodstream can potentially enter theirs. “There's minimal evidence that tattoo ink enters the bloodstream,” dermatologist Dr. Charles Puza, M.D., previously told Romper. “However, tattoos can pose a risk for the individual receiving the tattoo, because bacterial infections from tattoos can certainly enter the bloodstream.” It’s better to be safe than sorry.

When is it safe to get a tattoo after pregnancy?

If you are itching to get a tattoo, waiting until after delivery is the smartest option. Even after you give birth, you may want to give it some time before you jump under the needle. “After the immediate postpartum period, which is six weeks after delivery, I think that it’s fine to get a tattoo,” Dr. Prabakar says. “Six weeks postpartum means you’re generally out of the woods for all of the major complications that might occur.”

Even then, though, a new parent might want to consider putting off their tattoo appointment a bit longer. For one, there’s the issue of breastfeeding. If you breastfeed your baby, the same risks of infection — both STIs and local skin infections — pose a threat. “The overall safety of getting [a tattoo] while breastfeeding is unknown, but there are risks that may occur with any tattoo, such as infections or tattoo-related hypersensitivity reactions,” Dr. Marisa Garshick, M.D., a dermatologist, previously told Romper. “The treatments that could be required may not be safe in the setting of breastfeeding or may alter potential milk supply.” If you take medication to combat an infection, for example, it might make breastfeeding more difficult or even diminish your supply.

One option for pregnant people to consider is getting a henna tattoo, which is a non-permanent tattoo made from a naturally occurring, plant-based brown dye. That being said, you should be conscious about the historical and cultural context of henna if you’re not from a culture that typically uses it. For thousands of years, people in Egypt, India, and other West Asian, North African, and Middle Eastern cultures have used henna to decorate the pregnant bellies of people in their third trimester as a form of blessings and good luck. So, if you’re not from one of these cultures, use henna thoughtfully, as otherwise it can be a form of cultural appropriation.

In the end, waiting nine-plus months to ink a meaningful illustration is no big deal. As with most things during pregnancy, it’s better to err on the side of caution. You can keep the memory or tattoo inspo in your mind until you’re actually able to wear it on your sleeve.

This article was originally published on Jan. 7, 2016