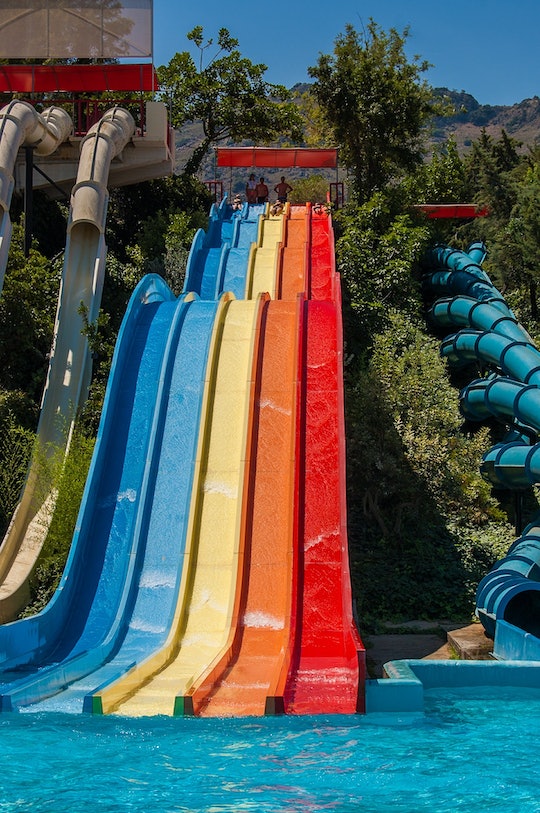 Can You Go Down A Water Slide If You're Pregnant?

There’s more than one risk in visiting the water park during pregnancy.

It’s hot. Kids are bored. It’s cool at the water park. Naturally, many families may be planning some water park fun this summer. But if you’re pregnant, is that such a good idea? Can pregnant women do water slides? Sure, the laws of gravity clearly indicate that they can go down a water slide, but experts weigh in on whether they should or not and what the risks are of going down a water slide when you’re expecting.

“The safest answer is no,” Dr. Melissa Walsh, an OB/GYN attending physician at Northwest Medical Center tells Romper, and there’s a very good reason why.

Risks of Riding a Water Slide While Pregnant

“In pregnancy, water slides pose a risk to the growing fetus in any trimester due to their potential for sudden or high-impact movements on the body, the possibility of crashing into someone else or vice versa, or a slip and fall,” says Dr. Walsh. “The force of the impact of these movements or scenarios could cause a condition called placental abruption, where the placenta prematurely separates from the uterus. This risk for this condition increases as the pregnancy advances as well as with the strength of the force of impact which is influenced by the heights of the slides.”

Kid-sized slides, however, are not off the table.

“Not all water slides are created equal, and slides your very young child would do (i.e. toddler slides) would be less likely to pose a risk,” Dr. Jennifer Lew, MD, an OB/GYN at Northwestern Medicine Kishwaukee Hospital tells Romper via email. If your 2-year-old wants a pregnant person to join them on a baby slide, that’s probably fine. That said, Dr. Lew tells pregnant people to ask themselves the following question: “Is there a chance I could hit my pregnant abdomen at any time during the slide?”

If the answer is yes, it’s best to avoid that slide.

A good alternative for pregnant women who find themselves at a water park this spring or summer is to opt for more low impact activities. Think lazy river floats or splash pad areas for little children. A pregnant person could soak and sun there, but it’s still important to remember that fast water slides aren’t the only threats a water park poses to a pregnant person.

“Falls are also a concern, since the ground is often slippery, and this is one of the most common problems we see during pregnancy,” Lew says. Slippery surfaces need to be considered, but so should the sun.

“Make sure you use sunscreen,” Sarah Kurtz, a Certified Nurse Midwife at the University of Maryland Baltimore Washington Medical Center says. “When you are pregnant, you are more likely to get a sunburn due to hormones.”

Many women notice skin changes while pregnant which can include something called melasma, “brown patches on the face around the cheeks, nose, and forehead,” the American College of Obstetricians and Gynecologist states. This condition has been found to be photosensitive, according to a study published in the Indian Journal of Dermatology. “Melasma and post inflammatory hyper pigmentation (PIH) are exacerbated by exposure to ultraviolet (UV) rays and visible light making sunscreen use an essential component of treatment,” the study explains. Thus the need to break out the SPF prior to any water park outing.

With little shade and the reflection off a park’s many water features, this is something an expectant mother must keep in mind.

And remember, the thrill of launching your body down a shoot of water will still be there post-pregnancy. To keep you and your baby safe, there are plenty of healthy, cooling activities pregnant women can participate in.

“In general, pregnancy is a normal and healthy state of life,” says Kurtz. “ If you were used to doing an activity before you were pregnant then likely you can continue to do it. Examples include walking, running, swimming, bike-riding, and weightlifting.”

Hear that? You’ve got the go-ahead to swim. Stick to the pools and save the water slides for next season.

More Like This
Can Swimming Induce Labor? Experts Weigh In
Barre Could Be The Low-Impact Prenatal Workout You Need
Considering Getting A Tattoo While Pregnant? Here’s What To Know
What You Need To Know About Eating Burrata During Pregnancy

This article was originally published on June 1, 2017