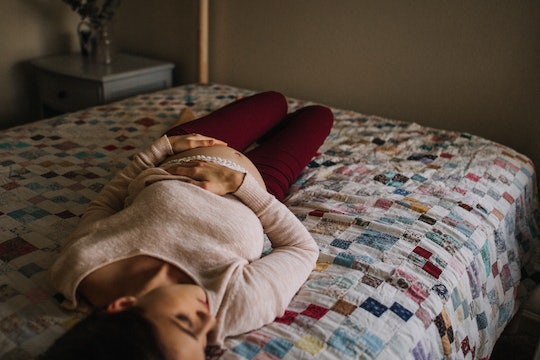 Yeah, We Gotta Talk About "Exploding Head Syndrome" During Pregnancy

But don't panic, it's not an actual explosion.

Between aches and pains, anxiety, and the constant need to pee, a good night's sleep can seem out of reach for many pregnant women. Add in an actual sleep disorder like exploding head syndrome (formally known as parasomnia), and getting rest can seem even more elusive. And yes, I am fully aware that exploding head syndrome during pregnancy sounds mildly terrifying, but don't worry — it's really not as serious as it seems. While researching this, I even realized that this has happened to me, and I never even knew the name of it.

"Exploding head syndrome — EHS — is a phenomenon in which an individual experiences sensations of loud noises such as cracking or booming sounds when falling asleep, and sometimes, although more rarely, when transitioning from sleep to wakefulness," Dr. James Giordano, Ph.D., Professor of Neurology and Biochemistry at Georgetown University Medical Center, tells Romper. "It is usually accompanied by an accelerated heart rate, quick gasp of breath, and feelings of surprise and/or anxiety. Sometimes it can also involve sensations of flashing light and feelings of warmth in the torso or extremities."

Sounds kind of intense, right? It does, but EHS is not painful, it can just be kind of scary in the moment. "EHS is most often caused by an abnormal burst in activity of an area of the brainstem referred to as the reticular system, which is involved in regulating arousal responses and autonomic functions," Giordano explains. As you fall asleep or wake up, activity in the brainstem gradually changes and regulates, but if you're experiencing EHS, it's more of a "quick rebound."

EHS is pretty rare, but it does occur in females more than males. It also tends to occur in clusters or during certain periods rather than just randomly. Dr. Paul E. Kaloostian, board-certified neurosurgeon and diplomat of the American Board of Neurological Surgery, tells Romper that while no one knows the exact cause, "Research shows that psychological stress has significant contribution to this disorder. Other research has identified potential sleep disturbance patterns, brainstem reticular activating system dysfunction, inner ear pathology, or microseizures as contributing factors."

So, what does this have to do with pregnant women? While Kaloostian points out that there is no specific link between EHS and pregnancy, there are reasons pregnant women may experience it, even if they never have before. For one thing, pregnant women tend to be a bit more stressed. For another, Giordano explains, "As gestation progresses, there are increasing shifts in the balance of both sex and stress hormones, which can affect brain activity, and this may be a possible cause of EHS."

How To Treat Exploding Head Syndrome During Pregnancy

If you're experiencing EHS during pregnancy, don't stress — as Giordano says, it's not dangerous, it's just a little scary. It's also difficult to prevent completely, since there's no treatment. "A number of treatments have been attempted, with clinical reports of clomipramine, carbamazepine, and topiramate — with little success," Giordano says. "Moreover, the use of such drugs during pregnancy needs to be closely monitored."

One thing you can do is to try reducing feelings of stress and anxiety. "It is thought that due to stress and sleep disturbances during pregnancy, EHS may be brought about," Kaloostian says. "There has not been any long-term studies showing this relationship, and certainly more studies are needed. However, prevention typically involves methods of reducing anxiety and stress, and increasing sleep to six to eight hours per day." He recommends frequent naps during the day.

And remember — most of the time, EHS is no big deal, as disruptive as it may be. It should resolve with time. "However, if EHS-like events occur frequently and/or increasingly, it may be worthwhile to check with your doctor, as similar phenomena can sometimes be signs of low-grade temporal lobe seizure or disruptions of calcium metabolism," Giordano adds.

Basically, if you experience EHS during pregnancy, it could be beneficial to try relaxing (which, yes, is easier said than done) or getting more sleep throughout the day.

Dr. Paul E. Kaloostian, board-certified neurosurgeon and diplomat of the American Board of Neurological Surgery

More Like This
This Is What Experts Say About Eating Hot Dogs During Pregnancy
When Does Pregnancy Horniness Kick In?
Considering Getting A Tattoo While Pregnant? Here’s What To Know
What You Need To Know About Bed Rest & Oral Sex