The Work of a Lifetime 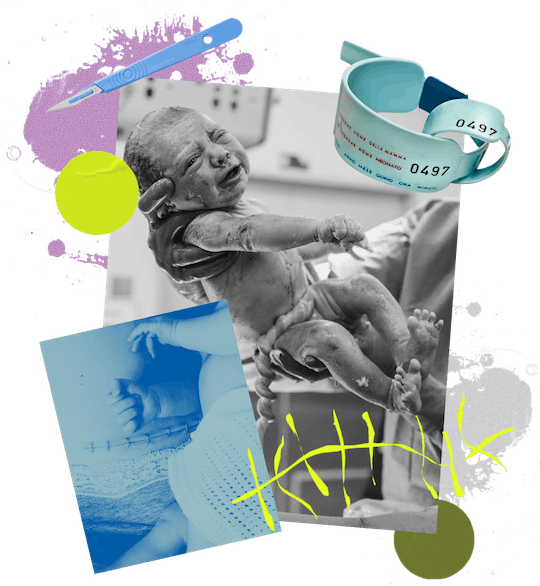 How We Really Feel About Our C-Sections

There are five moms on the edit team at Romper, with nine babies between us — six of those babies came into the world via C-section. Collectively, we've experienced the whole spectrum: Some were emergencies; some were scheduled; some were preemies; some were followed by a VBAC; some were born after hours and hours (and hours) of labor, labor that was labeled with that phrase that some of us (OK, it's me) find quite rude: "failure to progress."

Sure, no one can really prepare you for what it's like to become a parent, but I think we spent more time in my childbirth class discussing the analgesic powers of aromatherapy than we did about C-sections, despite the fact that 31.7% of American babies are born this way.

It's an experience shared by roughly 1 in 3 mothers and other people who have given birth — 1,186,397 were performed in 2019 in the United States alone — and yet it feels like 90% of the conversation around the procedure is a debate about its medical necessity or advice about how to avoid one. What if we talked, instead, about what having a C-section is really like — what happens during, how to prepare for it, tips for recovery? If you know you're going to have a C-section, shouldn't it be the best C-section possible? We want that for you.

It was in that spirit, in late 2021, that we partnered with OnePoll to survey 1,000 American mothers and other people who have given birth, 500 of whom had a C-section. We wanted to ask them about how they felt about their birth in the moment and over time. How do they talk about it? How does it affect them? Did they feel prepared? There are so many generalizations about how people should feel about having a certain kind of birth, but we wanted to know how individual people really felt.

I know I would have benefited from that.

Those who are good at math will note that the gap between the C and the V experience for both of these questions was 14%. What's funny is that a 14% difference — between the likelihood of feeling positively about your birth, and the likelihood of feeling prepared — will read, to many people, as much smaller than they expected. Imagine how much smaller it would be, then, if we could control for the cultural view of C-sections, if we could erase the stigma?

And perhaps that is changing. Our survey found that those who had a C-section were only slightly more likely to worry about being judged for their birth experience than those who gave birth vaginally (23% versus 20%). Of course, the idea that anyone experiences a layer of judgment on top of everything else that goes with childbirth just speaks to how much shame our culture slings about, but I found myself heartened by what I imagine to be a shrinking gap.

Our survey found that trusty millennials enjoy telling their birth stories the most at 67%, compared to 58% of Gen X, 55% of Gen Z, and 47% of baby boomers, but that Gen Z (49%) and millennials (41%) were far more likely to feel disappointed with their birth experience during their postpartum period than Gen X (19%) or baby boomers (13%).

Maybe it's because we talk about our birth stories more, and because we have higher expectations for our births? I think the phrase "birth experience" might make my boomer mother laugh, though when prodded, I know she gets the same wistful twinkle in her eye that I do.

A couple of us at Romper have had scheduled C-sections with our second babies, and we agreed there was something really beautiful about them. No hours of labor before major surgery, no lost sleep, more confidence about how to manage pain and ask for help, the ability to know (and celebrate!) your baby's birthday ahead of time… Look, we don't want to downplay the risks associated with major abdominal surgery, but there are perks. We wondered, what if a person's first C could be like our second?

I learned things about myself in my first birth that I didn't have to learn again. That was part of it. But also I knew what would be happening to me, and I felt taken care of. It's hard to overstate what a difference this makes, to not feel small, or at anyone's mercy.

I was nervous — scared, even — but I was also excited. I remember walking into that operating room in my nonslip socks and almost bubbling over with joyful anticipation. It was surreal and uncomfortable, for sure, but also a wildly happy occasion. I laughed a lot. I was proud of myself, of the way they were able to lower the curtain and plop the baby right on my chest, and I was able to hold him, laughing in disbelief while they sewed me up. I was also proud of the way I cried to the anesthesiologist beforehand, in the prep room, revealing that I was nervous, too, and asking for the reassurance I needed. I was proud, after, when I asked the nurse for painkillers when I required them, overcoming my typical need to be the perfect patient, which frankly is exhausting for everyone.

For a while, when I was younger, I used to worry I was doomed as a parent because of the way I became one — not pushing my baby triumphantly into the world but “failing” at labor and requiring an operation. But I know, now, that the moment I nodded my head to the doctor and consented to an operation that was good for both me and my baby was the moment I became a mother.

Because with the benefit of time I have come to see that nothing prepares a person more for motherhood — the real meat of it — than having your expectations completely upended. To be nimble and dynamic, to know when to change course, to adjust in the moment, to let your disappointment or uncertainty wash over you and then to move forward and make the best of any situation? Mastering those things is the work of a lifetime, for sure, but giving birth via C-section is good practice.