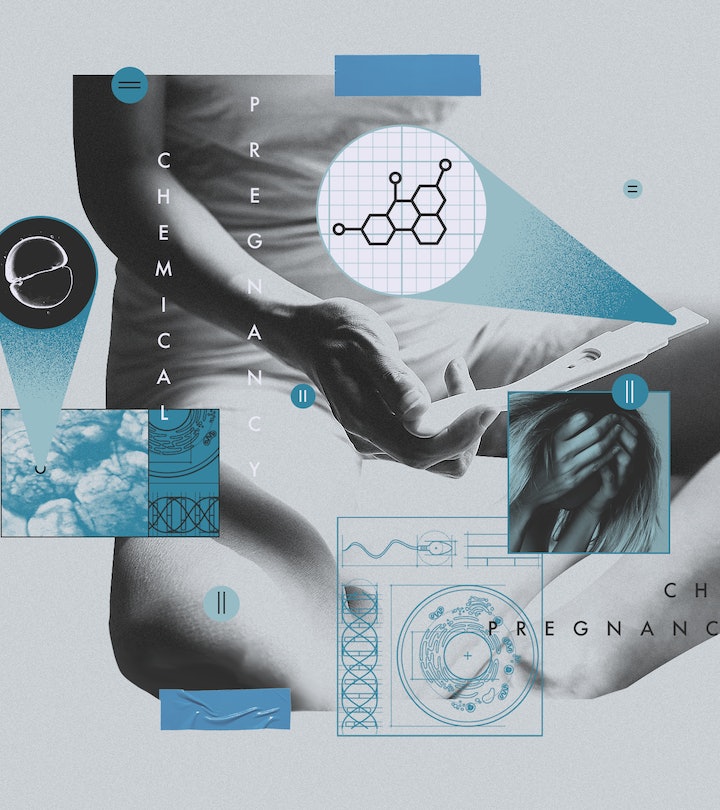 By calling a chemical pregnancy what it is — a miscarriage — I honor how wanted and loved that pregnancy was.

When two pink lines popped up on a First Response pregnancy test in November 2020, I was elated; my partner and I had begun trying to conceive just that month, and I felt as though I had won the lottery. I had tested before the date of my expected period, so it was still early, but I couldn’t make it through the dreaded two week wait.

My elation quickly turned to devastation when I began bleeding heavily later that night. I gathered conflicting information online about why I was bleeding after a positive pregnancy test. It could have been implantation bleeding, but it seemed more likely that I was experiencing something called a “chemical pregnancy,” a term I had never encountered before.

A chemical pregnancy occurs when a fertilized egg either doesn’t implant in the uterus, or if it does, it produces the hormone hCG but does not continue to develop. The word chemical is probably used because the home pregnancy test picks up hCG, but the embryo cannot be seen on an ultrasound. I bought a couple more boxes of pregnancy tests, and kept testing. As soon as the next day, the two lines had already begun to fade.

Could I even call it a pregnancy? Did I have the right to even imagine the baby that could have been, if I had never even seen them on an ultrasound? I felt haunted by these questions.

I felt shattered and adrift. The word “chemical” felt too clinical and distant to encompass the emotional highs and lows I was going through, but I wasn’t even sure I was allowed to call what had happened to me a miscarriage. Could I even call it a pregnancy? Did I have the right to even imagine the baby that could have been, if I had never even seen them on an ultrasound? I felt haunted by these questions.

Two weeks later, I called the midwife that my partner and I had chosen should I ever experience a viable pregnancy. When I described what had happened, she immediately told me I had experienced an “early miscarriage” — she never used the term chemical pregnancy. I finally felt that my emotions surrounding the loss were justified, but I wished I had never heard the term chemical pregnancy and began to wonder if there was a better, more supportive, way to describe similar experiences.

This type of early loss, which occurs before the sixth week of pregnancy, is extremely common. “There are some estimates that they account for 50-75% of pregnancies,” Stephanie Long, MD, a family physician and medical director in Los Angeles, previously told Romper. People usually find out they’ve experienced an early loss because they are testing early, but if you’re not an early tester, you may experience this type of pregnancy and never know.

The American College of Obstetricians and Gynecologists (ACOG) does recognize biochemical pregnancy loss, a “pregnancy loss based on low and decreasing human chorionic gonadotropin (hCG) levels or transient hCG detection only,” as a medical condition, according a statement ACOG sent me in an email. However, ACOG’s clinical guidance for practitioners advises that the preferred terminology is “early pregnancy loss,” so it’s unlikely that someone will hear the term chemical pregnancy in an appointment with their physician.

Where you will read and hear this term used constantly is on Instagram, and on the BabyCenter and What to Expect community forums, places where people gather to discuss their experiences trying to conceive. Unfortunately, the term can be harmful, detracting from their suffering by using cold, medical language, pressuring them to feel as though they need to recover quickly from a loss, or even refrain from appearing too distressed because it happened early. And in the aftermath of the Supreme Court’s ruling on Roe vs. Wade, ending the constitutional right to abortion, people who can become pregnant will surely be even more hesitant to speak openly, even to their care providers, about the symptoms and aftermath of miscarriage, fearing legal repercussions.

Arden Cartrette, a North Carolina-based miscarriage doula, encounters this early loss all the time in the comments on her Instagram page, where she shares resources on how to cope and heal after miscarriage, but she avoids the term, as she has written before. While she thinks people who use the term are not trying to be malicious on purpose — and in fact are likely trying to comfort others by emphasizing that they are “fortunate” their loss didn’t happen later — that language isn’t always comforting.

“Just because you experienced a loss earlier than other people, doesn’t make your grief any less valid,” says Cartrette.

Cartette tends to take her clients’ lead when it comes to the type of language she uses, but in general she thinks that care providers should replace the term chemical pregnancy with early miscarriage or pregnancy loss, in order to make sure that individuals feel that their loss is acknowledged and that they have space to properly mourn.

“Sometimes people feel like, ‘Well I only had a chemical pregnancy, it could have been worse,’” she adds. “In my sessions, I try to remind them it's OK to be sad over what they’ve lost.”

Alexia, who runs the Instagram account @mainstreammisscarriage, didn’t realize she had experienced what she initially called a chemical pregnancy until years after it occurred, which complicated her grieving process.

When you miscarry, one of the first questions people ask is ‘How far along were you?’ To someone who has just lost their child, it sounds an awful lot like ‘How much should I care?’

“I assumed it was a false positive because I didn't realize how unlikely that was — and how likely miscarriage was. Years later, after I experienced another loss and started spending more time in the loss community, I realized what had happened,” Alexia tells me. “I feel like calling it a ‘chemical’ downplays it. The term brings up feelings of inadequacy. And I often do it to myself. I wonder if I earned the right to call it a miscarriage after only two days.”

Through interactions with her Instagram community, Alexia has come to the conclusion that differentiating between types of losses creates a “hierarchy of grief,” where “chemical pregnancies are often put at the very bottom.” She advocates for using the word miscarriage for pregnancy and baby loss at any stage.

“When you miscarry, one of the first questions people ask is ‘How far along were you?’ To someone who has just lost their child, it sounds an awful lot like ‘How much should I care?’” Alexia continues. “A person who has had a miscarriage may choose to describe their own losses as early or late to differentiate between them or to communicate the physical process, but I'd hesitate to use any quantifying language when talking about someone else's miscarriage.”

In the immediate wake of my loss, I also had the impulse to downplay what had happened to me; I felt as though I should be grateful that the loss was early and even that I could get pregnant at all. This mindset blocked me from processing the heartbreak that I felt afterward. I wasn’t alone in this.

“Because of how early on I miscarried, I found myself questioning whether or not I truly had miscarried, and even if I was truly ever pregnant at all, which obviously is not a mentally well place to be in when you are going through such a traumatic experience,” says Natalie Coster, a photographer. Coster says encountering the term chemical pregnancy made her feel “as though my loss was less important than others, and insignificant,” and she too prefers to say miscarriage, rather than “early miscarriage.”

“There’s no need to differentiate between what’s early and what is not,” she says. “A loss is a loss, a miscarriage is a miscarriage. In my eyes there is no need to put these tragic experiences into pigeon holes.”

Cartette emphasizes that this experience is common — the people she counsels often need someone else to use the term miscarriage before they feel comfortable embracing it themselves. But that’s when the healing process begins.

“The minute I tell them, ‘You experienced a miscarriage,’ they’re like ‘Thank you for saying that,’” she says. “They think they couldn’t claim that term. But pointing that out helps them feel validated, and that helps them move forward.”

Although I still look back on my loss with sadness, calling it a miscarriage helped mend those wounds. It feels more truthful to use a word that places me within a community of people in all stages of miscarriage recovery: those who think about their losses every day, who aren’t over it and never will be, who went on to have rainbow babies, and those who didn’t.

By calling a chemical pregnancy what it is — a miscarriage — I honor how wanted and loved that pregnancy (and baby) was, and my own emotional journey as well. The term chemical pregnancy made me feel like I had to minimize my grief because my loss was early. But any terminology that makes people who can become pregnant feel as though they need to hide should be retired.