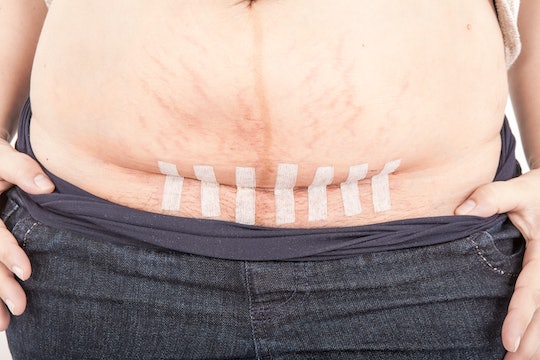 What You Need To Know About Keloid C-Section Scars

Learn why some C-section scars may look thick, raised, or bumpy.

When recovering from a cesarean section, the body goes through a myriad of changes. As a C-section incision heals, small, inherent differences in the skin can develop on the scar itself. If the scar tissue grows outside the boundaries of the incision site, appears lumpy or discolored, it could be what’s known as a keloid C-section scar.

Keloid C-section scars can develop up to a year after delivery and, although you may not like the way they look, they usually are not a cause for medical concern. Read on to learn what causes keloid C-section scars, how to care for them, and what can be done to minimize their appearance.

Why is my C-section scar keloid?

A keloid scar on your C-section incision site may appear raised, thick, or shiny. Dr. Kim Langdon, an obstetrician with Medzino, tells Romper that the definition of a keloid scar is “is an abnormal proliferation or continued growth of the scar tissue that creates a raised scar due to excess collagen that is usually a different color than the surrounding skin.”

In addition to their raised texture and appearance, keloid scars can vary in size and color. According to Langdon, a keloid C-section scar may look “reddish, brown or purplish, depending on your skin color.” In some cases, people with keloid scars report that an itching or stinging sensation can sometimes be felt across or around the scar.

How do you get rid of keloids after a C-section?

If you’re looking for a way to get rid of a keloid C-section scar, board-certified OB-GYN Dr. Cynthia Flynn tells Romper that “Mederma scar cream or 1% hydrocortisone cream can help.” However, Flynn also notes that these topical creams shouldn’t be applied until after your doctor has evaluated your C-section scar, which usually happens at your 6-week postpartum visit.

Laser therapy is another option for getting rid of keloids after a C-section. Birth educator and doula Sara Lyon tells Romper that “laser therapy can help to reduce the symptoms (pain and itchiness) and the visibility of keloid C-section scars.”

For keloid C-section scars that are particularly bothersome, your doctor may suggest surgery to remove excess tissue growth or masses that extend far outside the original incision area. Langdon explains that when it comes to keloid C-section scars, “surgical excision is possible but they may return.” And according to Lyon, “surgical treatment is risky because a body that’s overproducing scar tissue might do the same in the surgical healing.”

Why is my C-section scar raised?

Collagen’s growth pattern is to blame for the raised appearance of keloid C-section scars. “While scar tissue is composed of the same kind of collagen as normal skin, the alignment of the collagen fibers differ in their organization pattern (aligned in scar tissue versus woven in normal tissue). When the harder, more rigid scar tissue builds outside of the wound or incision site, it’s known as ‘keloid,’” Lyon explains. “Keloid scar tissue can grow into the body from the incision, externally in small or large masses, or laterally, beyond the edges of the standard scar.”

“Much like stretch marks, some people are genetically predisposed to develop keloid tissue,” Lyon says. A keloid scar can develop anywhere on the body. While there is a genetic component to the development of keloid scars, unfortunately, there’s no way to know ahead of time whether or not your C-section scar will become keloid. “There is little understanding of why keloid tissue grows more in some people than in others, or in one location more than another,” says Lyon.

Flynn tells Romper that due to the genetic component on keloid scar formation, if your parents have keloid scars, you may develop them as well. “About 10% of people are prone to keloids,” Flynn explains. “Some of the risk factors are dark skin, Asian descent, Latino descent, pregnancy itself and young age.”

Information published by the American Academy of Dermatology concurs. The organization lists family history of keloid scars, being of African, Asian, or Hispanic heritage, and being younger than 30 years of age as keloid development risk-factors.

Does a C-section keloid go away on its own?

If you have a keloid C-section scar, it is unlikely to go away on its own. Lyon tells Romper that “keloid scar tissue will rarely abate spontaneously.”

The genetic component of keloid formation means that you can’t completely stop a keloid scar from forming but, as with many things, an ounce of prevention can be worth a pound of cure. In short, proper wound care can go a long way toward helping your C-section scar appear smoother as it heals. Lyon recommends “adequate rest in the first 6 weeks of healing, wearing a compression garment like a postpartum corset, using silicone patches over the scar and doing consistent scar massage.”

Though Flynn also explains that “some keloids never go away,” she says that typically a year or two after birth “most become softer, smaller, and much less noticeable.”

Though most keloid scars are harmless, if you’re concerned about how a keloid C-section scar looks, feels, or has healed, it’s always best to consult your doctor.

Sara Lyon, doula, owner of Glow Birth & Body, author of You’ve Got This

More Like This
Here’s Why You Get Cramps While Breastfeeding
What Is An En Caul Birth? Experts Explain
Is A Sudden Cold An Early Sign Of Pregnancy? Experts Explain
Can You Have Sex During Your Third Trimester? Experts Weigh In