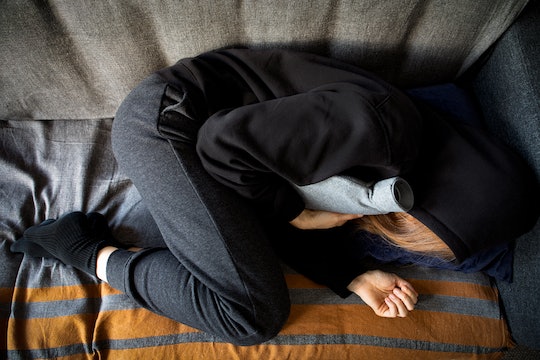 Lightning Crotch Can Happen When You're Not Even Pregnant, What?!

Experiencing a typical pregnancy pain when you’re not expecting a baby may raise a few questions. For instance, what does it mean if you have lightning crotch when you’re not pregnant? Here’s what doctors have to say about this type of pelvic pain, which is actually pretty common.

What Is Typical Lightning Crotch?

First, though, it’s helpful to understand what the term lightning crotch means most of the time. “‘Lightning crotch’ is the descriptive term commonly used to describe the sudden, sharp bolt of pain during pregnancy that can travel from the top of the round ligament (which is at the top of the uterus) and inserts into the labia,” Jacqueline Battistelli, MD, FACOG, OB Hospitalist at The Children’s Hospital of San Antonio, tells Romper in an email. “These pains can happen with position changes or even fetal movements, and don't typically last for very long. (They sure can make you stop in your step though!).” For the most part, experiencing lightning crotch during pregnancy is just a routine part of the process, and not cause for concern. “In pregnancy it is benign in nature unless accompanied by other symptoms such as bleeding or if it is prolonged,” Dr Alex Polyakov, OB/GYN, Fertility Specialist, and Senior Lecturer at the University of Melbourne, tells Romper. In general, lightning crotch during pregnancy can feel extremely intense for a brief moment here and there, but it doesn’t necessarily mean anything about your overall health.

Reasons You May Experience Lightning Crotch Outside Pregnancy

With this in mind, there are also some instances in which people may experience lightning crotch when they aren’t pregnant. These suggestions are what several different physicians suggested as potential causes of pain similar to lightning crotch, and aren’t meant to be alarming in any way. (In fact, some of the more serious conditions listed are very rare and unlikely to be the cause of your pain.) But it’s helpful to have an overall view of the many, many potential reasons someone may experience pelvic pain when they aren’t expecting a baby.

If you’re experiencing a sharp pain in your vaginal area and aren’t pregnant, then look at the timing of your cycle. “Pain at the time or just before menstruation may be related to cervical cramps and is also benign in nature,” says Dr. Polyakov.

“Pain caused by endometriosis may also manifest itself as intermittent sharp stabbing pain, which may be most frequent and severe at the time of menstruation,” says Dr. Polyakov. A chronic inflammatory condition, endometriosis is still not fully understood by researchers despite its extensive study, according to a 2017 review in Minerva Ginecologica.

For some people, their choice of birth control could be the culprit. An “intrauterine device (IUD) pressing on cervical tissue” can also cause sharp, stabbing pain, as Dr. Richard Beyerlein, gynecologist and obstetrician, tells Romper. For the most part, though, IUD users have a very low risk of adverse outcomes, according to a 2017 review in Contraception. If you have any concerns about your device, contact your gynecologist for a check-up.

Consider your nerves. “For women experiencing this type of pelvic pain who aren’t pregnant, it could be due to a number of underlying conditions or nerve disorders such as fibromyalgia, vaginismus, or vestibulitis,” as Dr. Elizabeth Cherot, Chief Medical Officer at Axia Women’s Health, tells Romper.

“Causes of lightning crotch outside of pregnancy can be related to… ovarian cysts [and subsequent rupture of these cysts],” Dr. Harpreet Brar, OB/GYN from DMC Hutzel Women's Hospital, tells Romper. Although the way ovarian cysts impact your fertility is often a top concern for people who have them, the cysts themselves can potentially be bothersome.

“One of the most serious conditions that can cause this type of pain is ovarian torsion, where an ovary twists itself on its pedicle,” says Dr. Polyakov. “In this condition blood supply to the affected ovary may be compromised and unless it untwists itself or is surgically corrected it is possible to lose the ovary. This condition is uncommon and usually causes severe prolonged pelvic pain which may last for hours, rather than seconds.” The odds of experiencing this condition are very low for most people.

Sometimes ordinary body functions can feel like lightning crotch. “Many normal things, such as ovulation, can cause the nerve to interpret the signals as pain, therefore the sensation of lightning. If short-lived and sporadic, it is usually not a concern,” Jennifer Lew, MD, OB/GYN at Northwestern Medicine Kishwaukee Hospital, tells Romper.

Again, consider the timing of your cycle. “The relationship and timing of this pain to the menstrual cycle may provide some clues to its possible cause,” says Dr. Polyakov. “For example, in mid cycle, at the time of ovulation, such pain may be due to a ruptured follicle which results in a release of an egg. This is quite normal and should settle without further intervention.”

In addition, “this type of pain may be a symptom of a urinary tract infection, however, it would typically include other symptoms such as cloudy urine or a burning sensation when you pee,” Dr. Leah Tatum, OB/GYN at Austin Regional Clinic, tells Romper. Keep an eye out for the other early signs of a UTI such as a frequent need to urinate, as well as an unpleasant odor in the urine.

When To See A Doctor

So how do you know when this specific kind of pain signals some ordinary body function, or something that needs to be checked out? Because there are so many different things that can cause lightning crotch-type pain, see a doctor if you have any concerns about your health, particularly for intense pains. “If the pain is severe, escalating in intensity, associated with a high fever or chills, nausea or vomiting, additional medical evaluation is warranted,” says Dr. Beyerlein.

If you see a doctor for the pain, be sure to mention any additional symptoms as well. “Discussing the timing of this pain during your cycle, history of similar pain, potential injuries, and other symptoms will help your provider determine the cause,” says Dr. Tatum.

Although lightning crotch not related to pregnancy can take you by surprise, it may not necessarily be a cause for concern. Definitely contact your doctor for advice, and remember that sometimes feeling that kind of pelvic pain is caused by perfectly ordinary bodily processes.

This article was originally published on Aug. 14, 2018