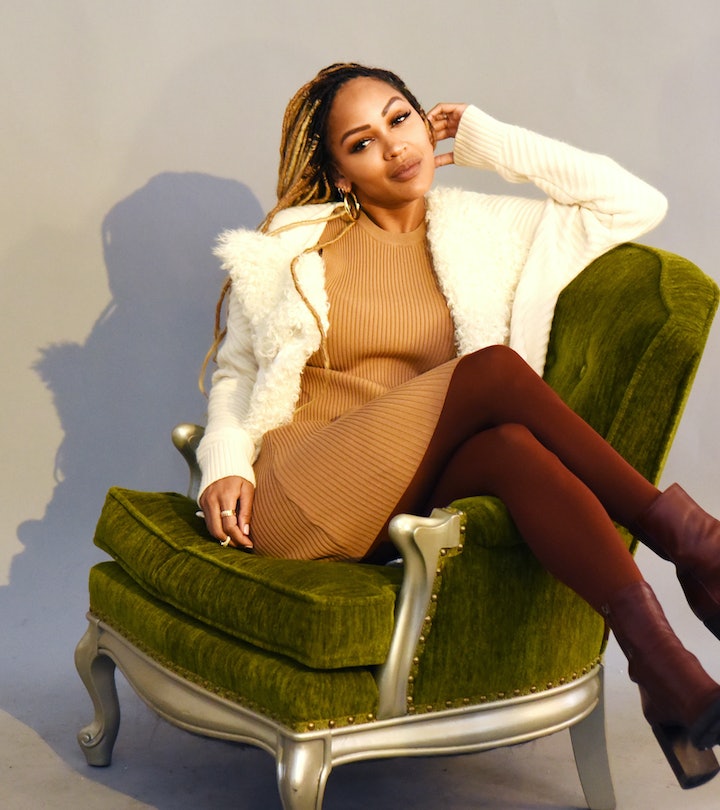 "When you say you’re not sure you want to be a mom, people look at you like you’re a bad person."

This week, actress Meagan Good’s latest film If Not Now, When? hits select theaters and Apple TV and Amazon. She’s tackling the role of a former teen mother struggling with addiction, but she had a role behind the scenes as well: as director. The 39-year-old has been acting since she was a child, and married producer and author DeVon Franklin in 2012. In an exclusive with Romper, Good opens up about the important decision the couple made about parenthood three years ago.

When you say you’re not sure you want to be a mom, people look at you like you’re a bad person. As if something’s wrong with you. But I was never really that girl who said, “I can’t wait to get married,” “I can’t wait to be a mother.” I just was very much a tomboy, and I started my career so young that I’d always been very business-oriented.

Growing up, there wasn’t a man in the house and it was like, you’ve got to take care of yourself. You can’t depend on men for anything. So I’ve lived a very independent lifestyle. I was a big fan of Halle Berry’s growing up. I admire her work, and she had her first baby at 41. I thought to myself, “That’s going to be me.” Now here I am, almost 40, and that is going to be me.

It wasn’t until I got married that I even considered having a family. My husband DeVon and I talked in the beginning, like, “Do you want kids down the road?” And I said, “I think I do.” But it was never “right now” or “soon.” I think we both knew that we wanted to wait a few years and really grow as a couple first, solidify the marriage. He started getting the itch way before me, definitely, but it was a very open conversation, which I loved and appreciated. Even though he was ready, he didn’t pressure me or make me feel bad because I wasn’t there yet.

I froze my eggs three years ago. I think everyone's different, but for me, it wasn't a nightmare at all. The only part that freaked me out came at the beginning, when they checked the number of eggs I had. I had around 10, and I thought, great! Ten eggs means ten kids, and the doctor said, “No, actually, that number is very low.”

When she left the room, I busted out crying. But I had something like a cyst inside my uterus that needed to be shrunk by doubling up on birth control pills, and when it shrunk they found 17 eggs. I’m all excited! Then they pulled out the 17 and only 14 survived; after they checked the chromosomes, only seven survived. After they put me and DeVon together to make a full egg that you could pop in the oven, only four survived. I just didn’t understand the process, so it was an interesting learning experience.

For the injections, I was terrified. I wanted to have someone come inject me because I couldn't ever imagine injecting myself. Then once I tried it for the first time, it wasn’t so bad. The hardest thing was, obviously you inject yourself a few times, and those places start to get a little tender and you have to find new spots. Once I got used to it, it was like, “Let’s get this thing done!” There were 11 or 12 days of injections, then we pulled the eggs out.

The hormones, the actual ingesting of hormones, was completely fine, but then a month after the retrieval I felt like I was falling off the edge of the world. It was overwhelming, out-of-control anxiety. I couldn’t get a handle on myself. My husband was like, “Do you think it’s the hormones just now catching up?” So I asked my doctors and they said it was totally normal. Some people feel they’re going crazy when they’re actually on the hormones, and some have an after-effect. That’s what I got.

Once I knew what was up, and knew what was wrong with me, it was a lot easier to deal with. I kept telling myself, “Girl, you’re fine. Just because it’s a feeling doesn’t mean it’s real.” I tried to get a hold on it as best I could, and then tried to be okay if I couldn’t completely get a hold on it. It lasted, on and off, for three weeks. I was like, “Got it. Okay. Cool. Stop.” It’s okay to feel how you feel, but know what it is.

I have my faith, and freezing my eggs, to be proactive instead of reactive, is me putting in work with my faith.

The process gave me peace of mind, 100%. These were the steps I needed to go through to ultimately get what I want. My family is pretty fertile, and I don't feel like I'll have an issue, but you just never know. I am praying that I won’t have any trouble getting pregnant. I’m a believer in what the Bible says: “Faith without works is dead.” I have my faith, and freezing my eggs, to be proactive instead of reactive, is me putting in work with my faith. You'll never regret doing it, but you might really regret not doing it.

In her new film, Good plays a woman who had a baby in her teens and later struggles with addiction. She agrees to enter rehab after her group of female friends intervene, and the women help care for her daughter while Good's character seeks treatment.

The theme is really about how it takes a village. The Patrice character is like a second mother to my daughter. You realize that dynamic of all the women nurturing each other from the moment my character has a baby at 17 years old. Your mother, an auntie, a friend, a sister — it’s about those types of relationships that are relationships for life, the people who care about what you care about, who nurture every part of you. That’s what we wanted to explore, while exploring each woman individually and her world. The village is what they can count on when they can’t count on anything else.

My own mother is incredible, one of the most selfless people that I know. At one time, we were in a four-bedroom house and we had 15 people living with us because my mom would literally take in everybody. If you didn’t have a place to stay, if someone was having trouble with their kid, whatever it was, my mom took in everybody. She’s an incredible example to me in unconditional love.

I want to be a mom and I want a family and I’m just now to a place where I think it’s about that time. We were looking to start this year, but then the pandemic happened. I am doing a show for Amazon and we only got two and a half episodes in. And it’s not just me — an entire cast and crew of people signed up for a certain something. So now I’m like, even though I think they’d be amazing and understanding, let me just get through season one. But I’m excited! Because I can’t wait to get to it now. That’s a very new thing for me. It’s a really cool feeling.

— As Told To Kaitlin Menza