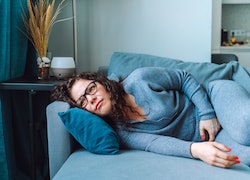 Here's Why Ovulation Can Sometimes Make You Feel Sick

It’s no fun, but it’s nothing to worry about.

Ah, ovulation. Whether you're trying to increase your chances of getting pregnant — or vigilantly trying to avoid getting pregnant — this is a topic many people care about a lot. Ovulation is the process near the midpoint of your cycle in which your ovary releases a mature egg for fertilization (and whether or not that egg has a chance to get fertilized is up to you). Whether you're #TTC or not, many people with ovaries like to know exactly when their ovulation is occurring. And when it comes to detecting ovulation, some of the not-so-nice symptoms might send your mind spinning (Why am I feeling sick during ovulation? Am I pregnant? Is nausea during ovulation just a coincidence?). Just like your period, people experience this phenomenon differently. That being said, there are some telltale signs and hints that ovulation is occurring, according to experts.

Can ovulation cause nausea?

Simply put: “Yes, it is possible to experience nausea with ovulation,” Dr. Renita White, M.D., FACOG, a board-certified OB-GYN at Georgia Obstetrics and Gynecology, tells Romper. Everyone experiences ovulation differently, so even though nausea might not be the most common sensation, it’s certainly possible and not out of the ordinary to feel.

In fact, there is a handful of symptoms that may occur around the time of ovulation. “Common symptoms during ovulation are a change in cervical mucus, mild cramps or lower abdominal pain typically on either side of the lower abdomen, and bloating and breast tenderness,” Dr. Prati Sharma, M.D., FACOG, a reproductive endocrinologist and assistant professor at the University of Toronto, tells Romper. “Usually women do not feel sick, but mild lower abdominal pain is quite typical. Changes in mood can also occur."

What does it mean if you're not feeling well during ovulation?

There are a couple different reasons why you might feel sick to your stomach around the time that you ovulate. Menstruating people experience changes in their hormone levels during this time — specifically, a surge in something called the luteinizing hormone, or LH, 12 to 36 hours prior to ovulation. If you've ever used a home ovulation kit, this is the hormone it measures. This quick spike in the LH hormone can throw your digestive system out of whack, thus making some people feel nauseated.

For Rachel Rodriguez, 27, there is absolutely no mistaking when she's ovulating. "I can literally feel whether my egg is releasing from my left or right ovary each month about two weeks before my period. The pain is worse than my period cramps. It feels like something is being carved out, and Advil and exercise don't help. It usually lasts about 45 minutes," Rodriguez tells Romper.

There's a name for this pain Rodriguez deals with monthly, and she's not the only one who experiences it. Some people experience constant discomfort, while others experience sharp, intermittent pain. "Some women feel a twinge or even a painful sensation at the time of ovulation. Medically, this is called mittelschmerz, or 'middle pain,' which is usually a one-sided, lower abdominal pain associated with ovulation," Dr. Alan Copperman, M.D., OB-GYN, tells Romper.

Wonderful, because PMS and menstrual cramping obviously aren't fun enough on their own. The exact reason for mittelschmerz isn’t fully known, but it’s thought to be linked to the blood and fluid released when follicle growth ruptures and releases your egg before ovulation. “It correlates with ovulation,” White says. “However, it is unknown if the pain is due to the actual release of the oocyte (egg) from the ovary or if it is related to swelling of the ovary prior to release of the oocyte.”

Does feeling sick during ovulation mean you're pregnant?

Uncomfortable, nauseating symptoms as a result of ovulation can totally throw you for a loop as you wonder about pregnancy symptoms. The timeline, however, doesn’t quite line up. “At the time of ovulation, it is too early to be pregnant,” White says. “And it does not correlate if sperm meets with the oocyte that was just released.” So with pregnancy out of mind for the time being, you can focus on relieving any unpleasant ovulation symptoms you’re experiencing.

Answers to the questions that keep you up and night — and stories you want to share with the group chat.

Remedies for nausea during ovulation

If you're someone who experiences unpleasant physical changes during ovulation, there are two things to remember: It is temporary and normal. In fact, White says, “usually the nausea should be short-lived.”

Of course, these facts won't make you feel any better in the moment, but there are a few treatments that might. “Applying warmth to the abdomen by using a heating pad on a low setting can help ovulation pain,” Sharma says. “Also, taking anti-inflammatory medication like Tylenol, Advil, or Naprosyn can help with abdominal cramps.”

However, Sharma also cautions, “If a woman is trying to conceive, we do not recommend using a heating pad or medication as this can delay ovulation or interfere with conception and implantation.” For those who struggle with particularly painful ovulation and aren't currently trying to conceive, birth control pills might be the best solution. These medications actually prevent ovulation completely, thus reducing the side effects that come along with it. Communicate with your doctor, and they'll advise if they recommend this as a form of treatment for you.

Overall, ovulation can indeed make some people feel briefly unwell without cause for concern. That being said, there are certain signs and symptoms that can point to a medical issue. People should contact their doctor if the pain is severe, lasts more than one day, is accompanied by bleeding, or comes after recent unprotected sex, as Dr. Richard Honaker, M.D., a Texas-based family medicine doctor, tells Romper.

Sharma also notes that severe pain should be addressed by a doctor, especially if it is excessive, requires time off from work, or hinders you from performing daily activities. "If symptoms are accompanied by infertility (trying to conceive with no success for six months to one year), an evaluation by a fertility specialist may be warranted,” she says. “Anytime during the menstrual cycle that there is severe pain, more immediate evaluation should be considered as this could represent something more emergent.”

If you’re simply unsure about what you’re feeling and why you’re feeling it, it never hurts to reach out to your medical provider for some more reassurance and insight. So, whether you're hyper-aware when ovulation occurs or the entire process happens unbeknownst to you, one thing is a fact: Menstruating bodies are fascinating.

More Like This
OB-GYNs Explain The Connection Between Stress & Miscarriage
Diastasis Recti Exercises You Can Do At Home To Heal Your Abdomen
Why Is My Vagina Itchy? Experts Explain
What Foods Fight Nausea During Pregnancy?
What Parents Are Talking About — Delivered Straight To Your Inbox

This article was originally published on July 18, 2018