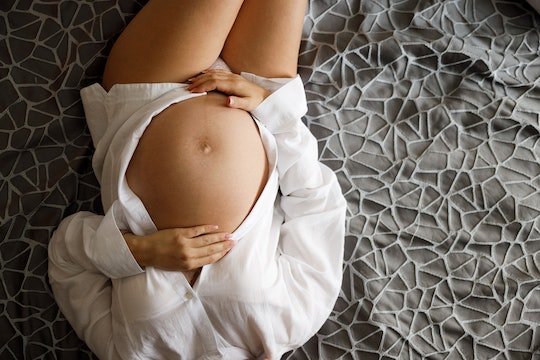 What You Need To Know About Bed Rest & Oral Sex

Do your doctor’s orders for no sex while on bed rest mean no fun at all?

Having to stay in bed and not be allowed to leave sounds kind of like a dream when you’re feeling exhausted and overwhelmed by life — but for pregnant people on bed rest, it’s more of a nightmare. In her recent memoir Knocked Down: A High-Risk Memoir, the author Aileen Weintraub writes about being put on bed rest for five months during her first pregnancy. “Sex” was on the long list of things that Weintraub was ordered not to do by her doctor. She writes, “I knew that my sex life was going to change with pregnancy, I just didn’t count on it coming to a sudden halt.” Are all forms of sex really off the table during bed rest? What about sexual activity that does not involve penetration? Can you receive oral sex while on bed rest?

What is bed rest?

“Bed rest” is a catchall term that can be used for everything from your doctor asking you to cut back on strenuous activity to being told by your doctor to only get out of bed to use the bathroom. If you have a bad flu or other illness you might be on bed rest (or just not feel able to get out of bed), but the term is commonly used when talking about people who are pregnant and have a reason to fear that they will go into labor prematurely if they keep up their usual level of activity.

The most common reasons patients are put on bed rest include “second and third trimester bleeding from the placenta or preterm labor contractions,” Dr. Maureen Whelihan, M.D., OB-GYN tells Romper by email. She also notes that “hypertensive disorders also often put the patient on bed rest to keep their blood pressure lower (and not raised by the excitements of daily living).”

Can you have oral sex while on bed rest?

As you might know if you’ve ever been trying to get an overdue baby to come, sex is on the list of things that your doctor (or the internet) might tell you to do (along with walking and eating pineapple and spicy foods — it’s pretty random what gets our uteruses dilating). Having an orgasm releases oxytocin, which can lead to uterine contractions. If you have vaginal intercourse, semen can soften the cervix. But what about if you’re trying to keep a baby (or babies) from coming. Does that mean sex is off the table?

But that doesn’t mean that oral sex while on bed rest is likely going to get the OK from your doctor, either. Orgasm itself, Whelihan says, is likely on the list of things to avoid “for fear it will stimulate contractions in the preterm labor patients and raise the blood pressure in the pre-eclamptics.”

Patients should put aside feelings of embarrassment and directly talk to their doctor about what is and isn’t going to be allowed, says Weiss. “I encourage families to ask specific questions: What can they and can't they do? For example, should they avoid orgasm? What about nipple stimulation? Both of these release oxytocin and may cause uterine contractions,” she says. Often, “the answer is that people are really on pelvic rest, which means no activity involving the pelvis. While not often spelled out, this can include nipple stimulation as well,” she adds.

“Getting the doctor to even specify what ‘no sex’ means is half the battle,” says Whelihan in agreement. “The doctor is often as reluctant to have the conversation as the patient. I would guess that most OB-GYNs never get to the nitty gritty of what constitutes ‘no sex’ let alone discussing oral.” she adds. But that doesn’t mean that a frank discussion isn’t warranted, or, frankly, part of your doctor’s job.

How can a non-pregnant partner support a partner on bed rest?

Weintraub, who lived the stressful experience of being on bed rest during her high-risk pregnancy, recalls the strain that bed rest put on her marriage. “While I couldn't have sex, and though I was in pain almost the entire time, while on bed rest I did long for intimacy, and that was difficult to maintain with all the stress of carrying a high-risk pregnancy,” she tells Romper. She had some ideas about ways that she and her partner managed to maintain some intimacy despite the strict pelvic rest her doctors ordered. “We had to find creative ways to keep the romance alive, and one of those ways was by reminiscing about romantic moments we had experienced together, such as our pre-baby-making trip to Costa Rica.” She and her husband also got out champagne glasses and made non-alcoholic spritzers for a date night in order to spend some quality time together.

The best way for a partner to provide support to a pregnant person on bed rest is to “ease fears by reassuring a bed-resting woman that she is still desirable, that nothing between them has changed,” Weintraub says. “Making sure a bed-resting woman feels seen and heard goes a long way, and a little bit of pampering helps too. That could mean bringing flowers, making time for massages, snuggling — there are so many ways to show someone you care about them.”

In short, it’s likely not an option to receive oral sex while on bed rest, but there’s not a one-size-fits-all answer. Both experts had good advice that any pregnant person can use: don’t be afraid to ask the specific questions, and to advocate for yourself. You and your partner deserve real answers about what exactly you can get up to during the weeks or months where you have to stay in bed.