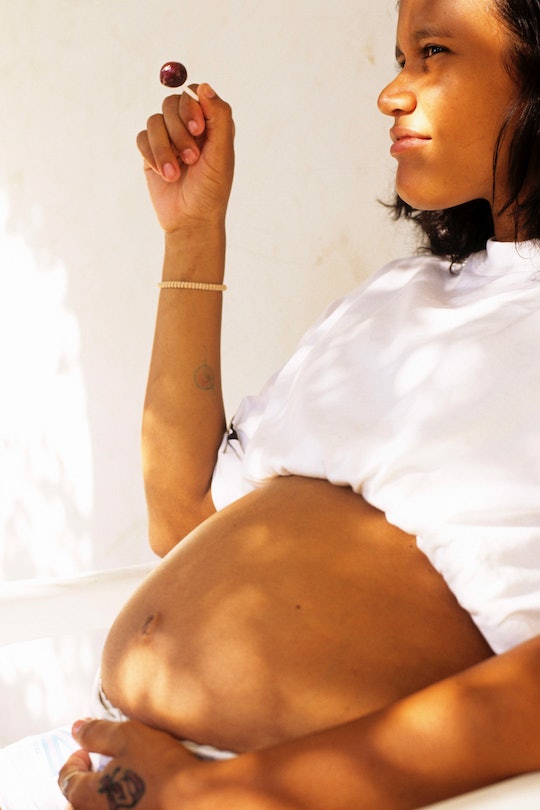 Here's The Deal With Pregnancy Pops & How They Work

If you’ve ever experienced nausea during pregnancy, you know it’s the worst. Morning sickness can throw off an entire day. And the fear of feeling sick is almost as bad as the actual queasiness. So is it any wonder most people will do anything to prevent the icky feeling? Ginger, vitamin B-6 supplements, and drinking plenty of water are all recommended as deterrents, but there’s a new product others say is the antidote: pregnancy pops. Here’s everything you need to know about them.

What are Pregnancy Pops?

Using certain flavors or smells to ease nausea symptoms is not a new concept. They’ve been around since at least 400 B.C., reports The Aromatherapy Book: Applications and Inhalations. “Healing with essential oils through the sense… dates back to ancient times.” But it’s seeing a resurgence today because the application appears to work.

In their paper “Nausea and Vomiting: Causes, Physiology, Remedies, and the Role of Preggie Pops and Queasy Pops” provided by Davine, authors Amanda Martin and Rebecca Carrol report that “There is anecdotal and sometimes studies showing the benefit of a variety of natural flavors in reducing distress of nausea and vomiting symptoms.” These include the following flavors: ginger, lavender, raspberry, bitter orange, lemon, peppermint, and cinnamon. They add that people who find Preggie Pops and Preggie Drops effective “benefit when the molecules are released in small amounts into the mouth and nose over a period of time. The sucking action seems to help and we cannot rule out pure distraction. This approach seems to stimulate a combination of neurons in the mouth and nose.”

“Nausea is one of the most common symptoms of early pregnancy,” says Dr. Doreen Condon, an OB/GYN affiliated with Roper St. Francis Healthcare. “It can range anywhere from mild to severe nausea, which we call hyperemesis gravidarum, which is when you lose weight and have such significant nausea that you're not able to keep up your calorie intake.” That’s the extreme. For the average woman, mild nausea throughout the first trimester is more likely and for those suffering, Dr. Condon says Preggie Pops could provide some relief.

Which is to say, if you’re looking for an OB/GYN-recommended treatment that’s actually used to prevent queasiness, you might want to skip the lollies and just ask your doctor about a prescription for doxylamine.

The other item to note when shopping the preggie pops aisle is that many of the drops and lollipops sometimes contain sugar. For those at high risk for gestational diabetes, “they’ll want to look for a sugar-free option,” Dr. Condon adds.

“Do we have scientific data that says that this will definitely help treat your nausea? No,” says Dr. Condon. But will an essential oil based product hurt you? That’s a no as well. And if you feel better eating them, then there’s no harm in it, she says.

Of course, if pops and lollies don’t alleviate issues, there are plenty of other natural remedies people can turn to.

“Eat small, frequent meals versus several large meals instead of three meals a day,” Dr. Condon recommends. “You never want to force anything down when you're nauseous. Eat bland foods, not a lot of spicy foods. You know, they talk about the BRAT diet, which is bananas, rice, applesauce, toast. You just want to take in food that's not going to trigger the nausea.”

Also, get your rest, exercise, and remember to drink plenty of water. And if symptoms persist, always contact your doctor.

More Like This
20 Moms Reveal Their First Pregnancy Craving
All The Reasons Why You Might Have A C-Section
Breaking Down The Different Types Of Postpartum Infections
Can The Way You Sleep Really Turn A Breech Baby?